Lana and I, with our birding buddy, Gordon out on holiday from Scotland, as well as Dirk Glado from Germany, old friends, had  included Giant’s Castle in our birding itinerary.

The variety of species normally encountered in the camp and generally in that montane biome, plus my having secured a booking at the old Vulture Hide, bode to our having some good photographic opportunities whilst visiting Giant’s Castle Game Reserve.

Well it wasn’t to be; The extended drought severely impacted on the bird populations with many entering last years breeding period with inadequate food resources.  The numbers and variety of birds during the entire 6 week birding excursion were definitely far less than expected.

Surprisingly we had no vultures land and feed at the old vulture hide where we were expectantly waiting, cameras a ready!

This despite my bringing smaller meaty bones especially cut for me from my local butcher, I thought it to be a Vulture treat, alas not, but the Crows and Ravens were most appreciative.

We did have a few other birds arrive

We had a Cape Grey Mongoose arrive in order top purloin some of the tucker. 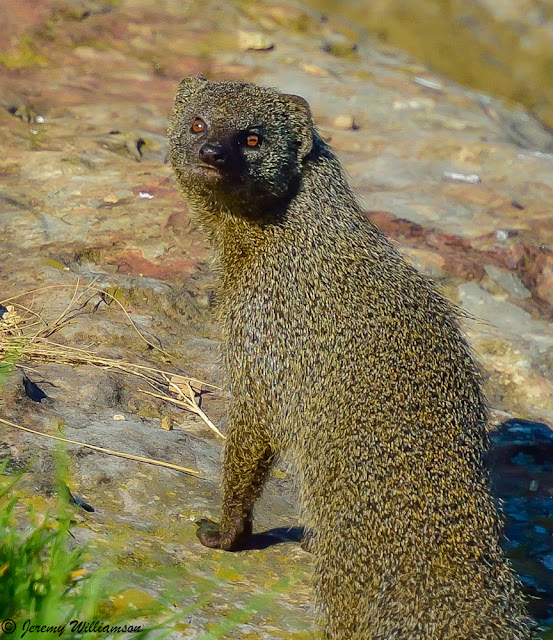 Then the guys who would not come and sample our offerings ! 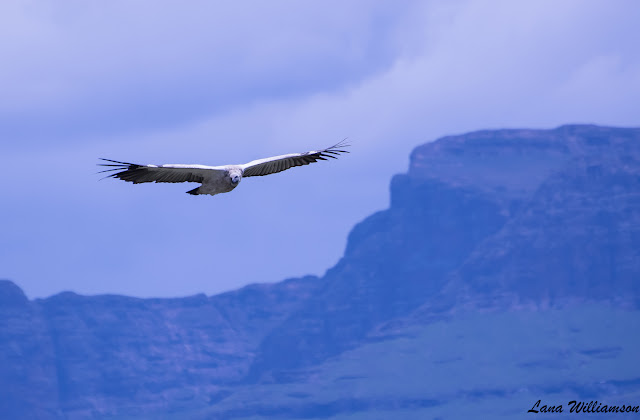 The light was against us, what with a storm brewing, we decided to leave early afternoon 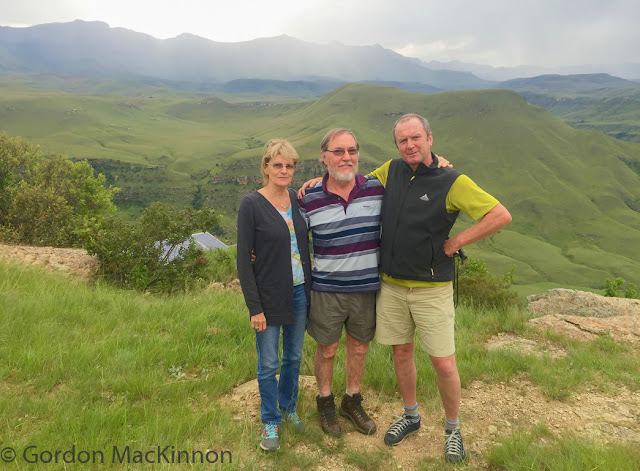 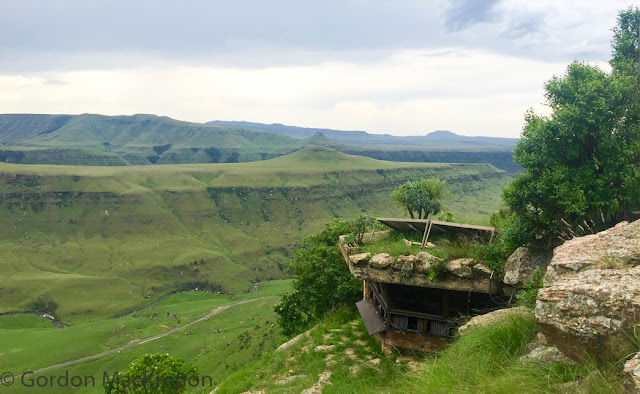 A short distance from the hide, a flush toilet has been constructed. A welcome addition. 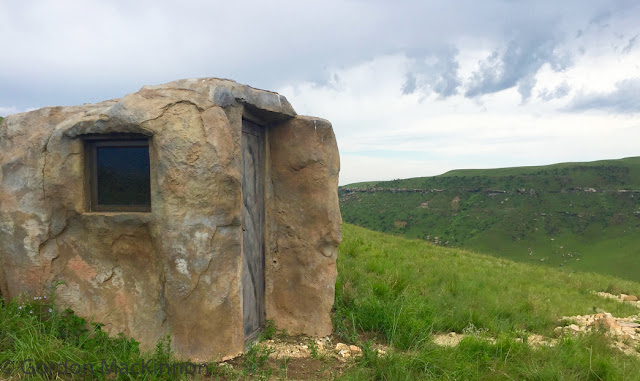 Giant’s Castle Game Reserve’s Camp follows closely behind Thendele Restcamp in the Royal Natal National Park in by opinion as an ultimate Drakensberg vacation destination. The rooms are well appointed and in better repair than any of the other Ezemvelo KZN Wildlife’s rest-camp's accommodation. The mountain view chalets all have views of the recumbent 'Giant". Here is a reflection of what guests gaze upon when staying at the Giant's Castle Lodge. 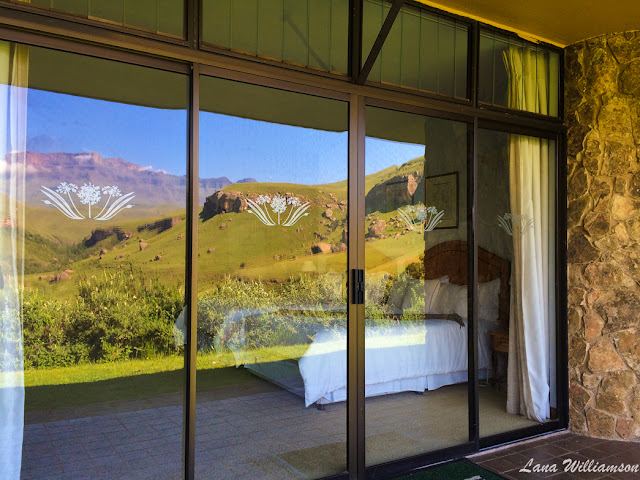 Reservations at Giant’s Castle are on a bed and breakfast basis, despite all the units being self-catering. I guess this helps the restaurant substantially to be viable. At breakfast, which was delightful, I had a look at the menu for lunch and dinner, that which was offered seemed to be an excellent variety and well priced too.

With check-in from 14h00 and the last guided experience at the San Rock Art shelter and diorama at 15h00, we hastened to put all our perishables in the fridge, grabbed our binoculars and cameras and off on the relatively easy hike to see this legacy of old.

En route, Malachite Sunbird, Ground Woodpecker were specials and then in and through the dank canopy forest situated just below “Main Caves”. A community and accredited San Rock Art guide was there to meet us and led us through the enclosure to the site. 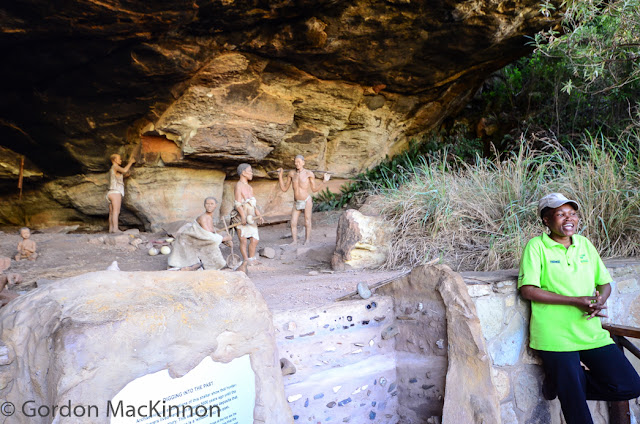 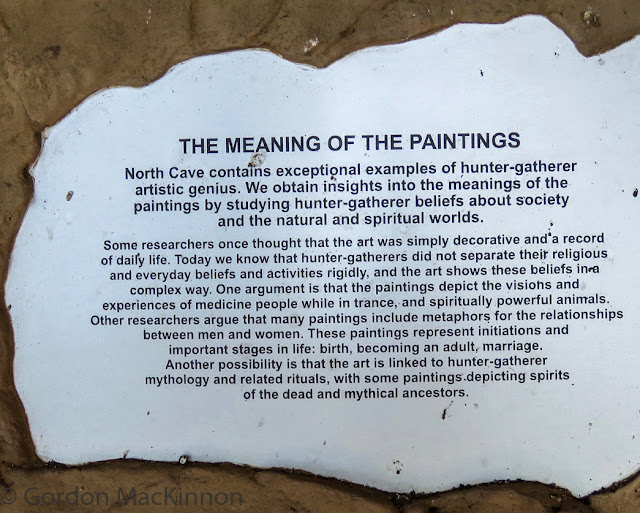 The enclosure is to keep vandals out of the precinct, a fair bit of damage to the paintings and graffiti  in various forms is evident.


The diorama set where these folk would have lived, is an excellent idea.

From the shelter one is able to look down onto the Bushman's river and across to Giant's Castle Camp.


We chose to follow the river side path back to camp. 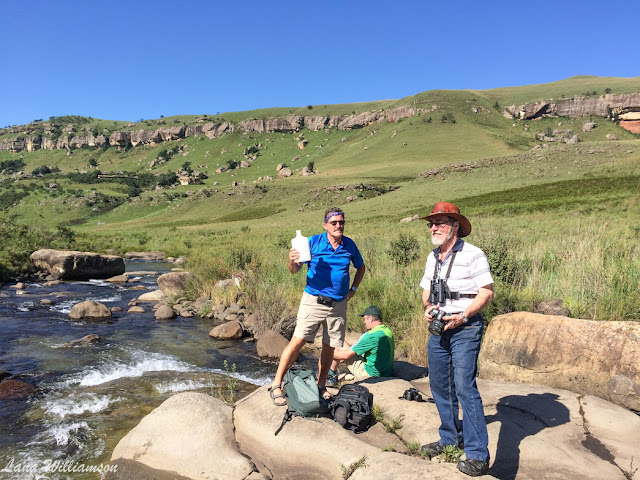 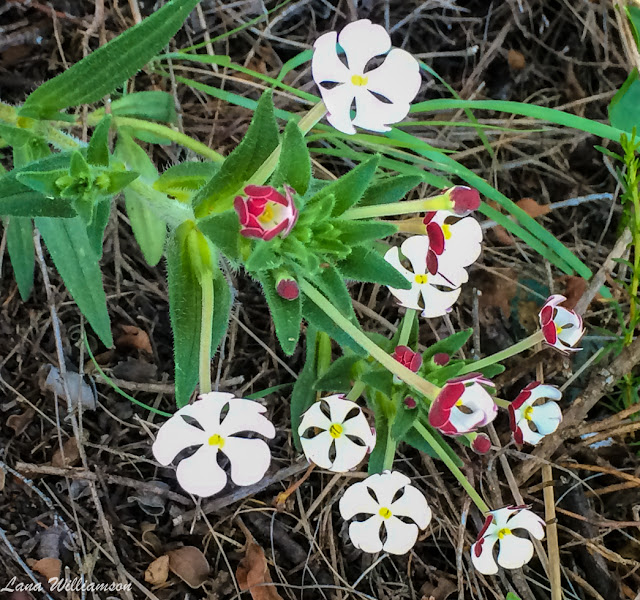 Some delightful plants on the way.

Posted by Far and Wild Safaris at 4:52 AM