Kwandwe Private Game Reserve is located in the malaria free Eastern Cape, almost two hour’s drive from Port Elizabeth in the Great Fish River valley. This  22,000 ha of rehabilitated ostrich, sheep and goat farmland, now hosts a wide diversity of the species that originally called this area home, and that includes the Big Five, with both black and white rhino, and cheetah as well, all having been reintroduced. Leopard would have been the only one of the Big Five to have continually existed here, although persecuted by the farmers and consequently becoming very secretive and rarely seen.  The other naturally occurring species who managed to survive the years of agriculture and persecution by the farmers are now thriving in this protected environment. Species such as bat-eared fox, caracal, black-backed jackal, aardvark and aardwolf, all fascinating animals, enjoying the protected status of Kwandwe Private Game Reserve.

We were met at the Park Reception by Graeme Mann the General Manager, who would give us some insight to Kwandwe and what the various Lodges offered. His passion for the wildlife and his work environment is so apparent.  Wonderful being caught up in his enthusiasm – Kwandwe is going places !
Kwandwe Game Reserve has four Lodge venues – Lana and I would be staying at the delightful Ecca Lodge for a couple of nights. A child friendly venue, beautifully appointed with rather interesting ‘Gabion’ styled structures as part of the decor. This with the large expansive windows and open decks, gives guests the impression of being right there in the bush.  And what amazing bush this is too. 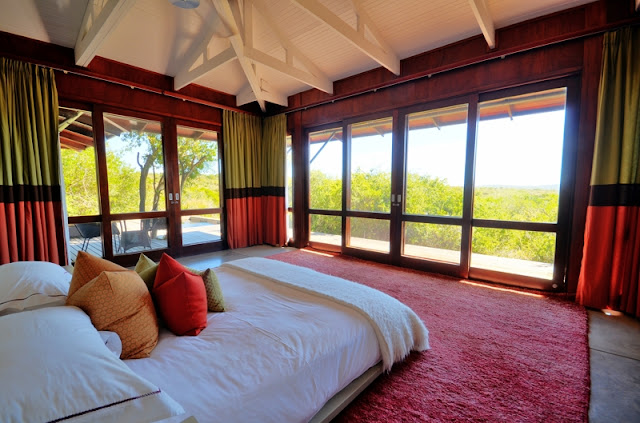 Ecca Lodge
The six free standing Chalets at Ecca Lodge are really large. We opened the door to the cool haven of our Chalet and stepped into a large lounging area, couches, work station, mini bar, TV ..... 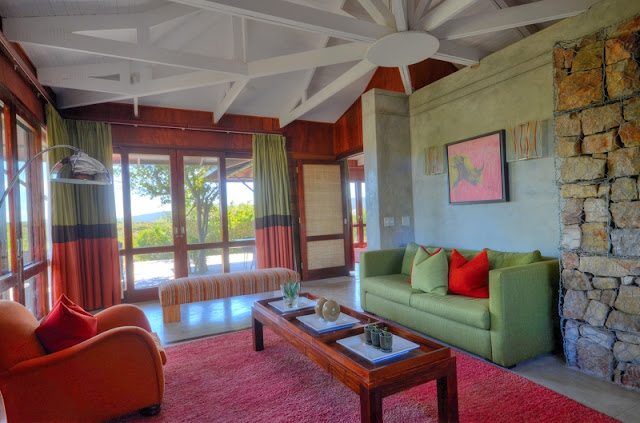 ....and then through into the bedroom with its magnificent views over the bush. These rooms so suitable to be converted to family suites. 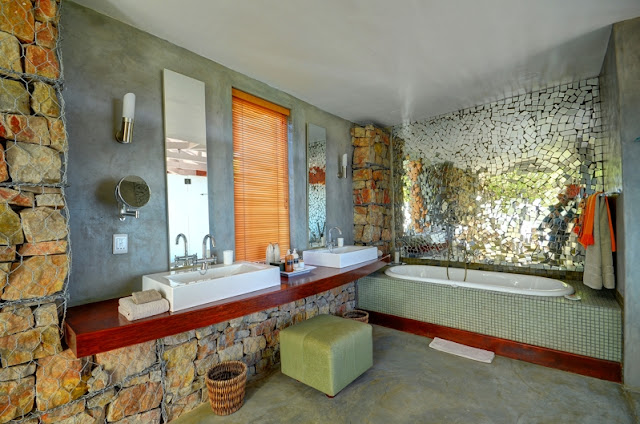 Everything here was just that much larger, with a very ample bathroom through frosted glass doors. Mirror mosaics and the rough rock Gabons have been used to good effect. Quite unique ! 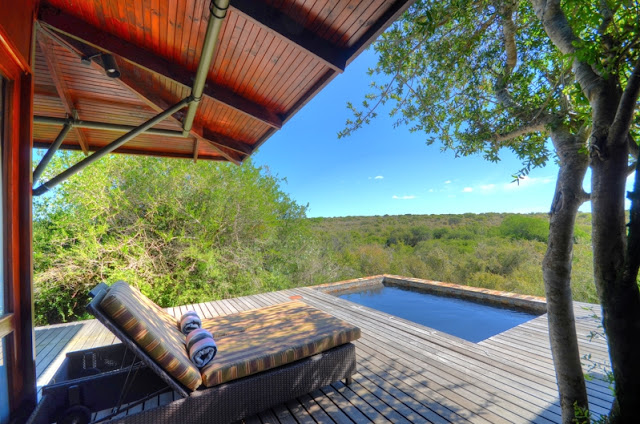 We had our own private plunge pool and for those wanting to swim, there was a pool suitable for that at the Main Lodge. 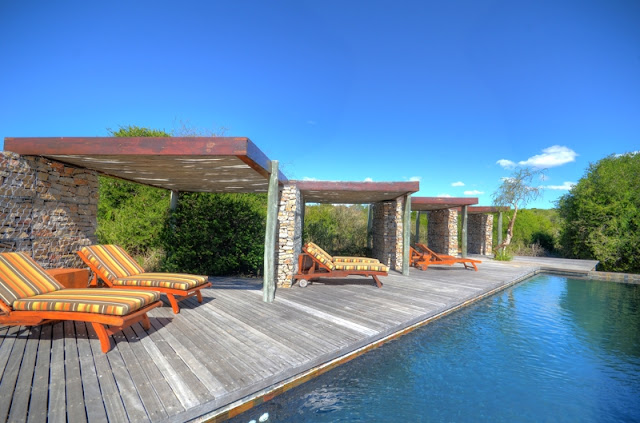 There is an internet station with adjacent playroom with all sorts of ‘goodies’ to keep the younger guests entertained. I liked the child sized desk workstation.

For the adults there is a lounge with an open bar where guests may be helped or help themselves. 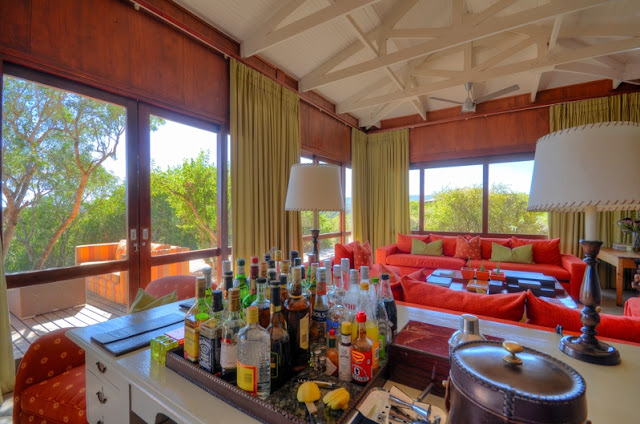 It’s in one of the other rooms that guests gets some of the best of surprises, this would be the dining room. Here an interactive kitchen adds value to the less formal air of this Lodge. Yip we arrived for lunch on the first day with a comprehensive menu beautifully written out on the board.
Then the meal arrived - Turkish salad; roasted pear, Parmaham and blue cheese and nut salad; vegetable pitas; pan fried prawn and pineapple salsa; Kudu sosaties in BBQ. All in separate bowls and dishes, what an attractive tasty treat. When we were replete, so the dessert of granadilla yoghurt mousse arrived, with a rather decent cup of coffee.  Just checking, it was an ‘ Industrial’ Nespresso that produced the divine brew. So consistent and good was the Nespresso coffee on this venture of ours to the Cape, that on our return, Lana had to buy me one!

We met our Ranger and Tracker at ‘tea’ that afternoon. Tea by the way was just irresistible! Little milktarts, savory filled phyllo pastry thingies.. an... and....  !!

Ryan and Andy were to provide us with a game viewing experience at Kwandwe, second to none!

No mad rush to tick all the high profile animals here. We drove from one interesting area to another, birding, bushing, bucking as we went, and so the diversity  of Kwandwe unfolded. We saw black rhino happily munching on that wonderful ‘porkbush’ more commonly known as spekboom.  An excellent food for many of the larger herbivores such as elephant, black rhino and kudu, but what  is highly significant, is that it has the inordinate ability to “fix” a vast amount of CO2 from the atmosphere, South Africa’s most important ‘sink plant’.
At one stage we came upon a rather impressive gathering of  Cape oryx and zebra, their magnificent hughes and stark contrasting colours gleaming in the afternoon light. 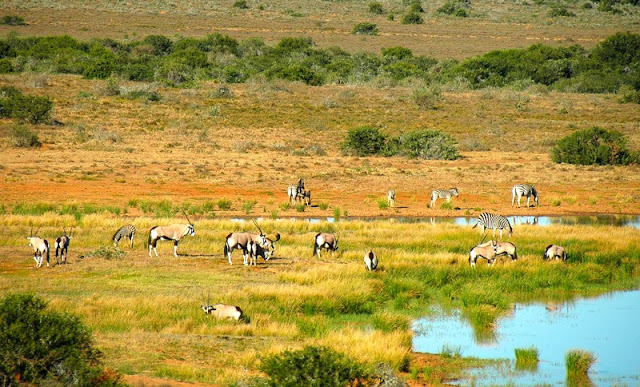 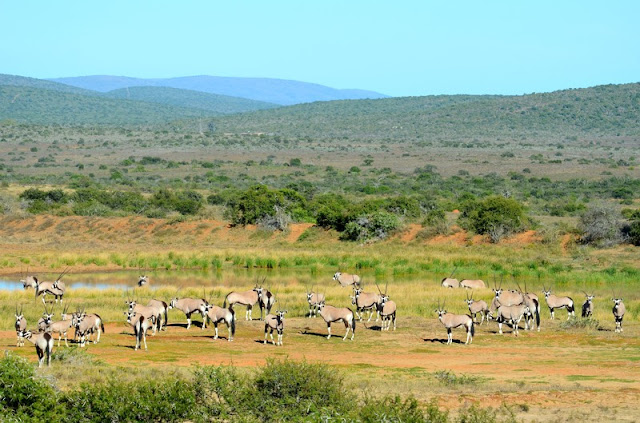 Then we had a rather friendly white rhino calf engage us for some time. Aaahh! Just too cute. 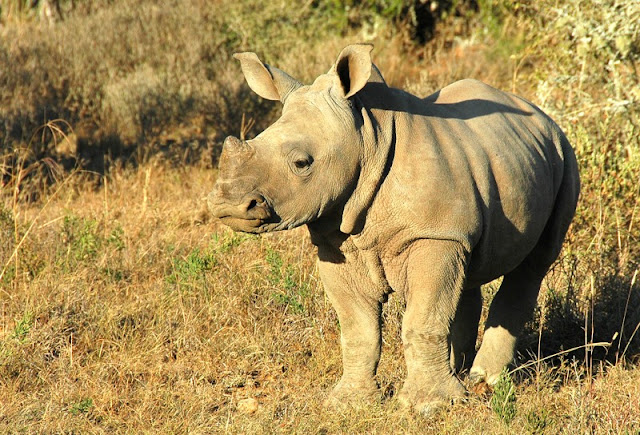 Then on to cheetah and elephant, buffalo and more rhino, all interspersed with sightings of numerous antelope and birdlife. 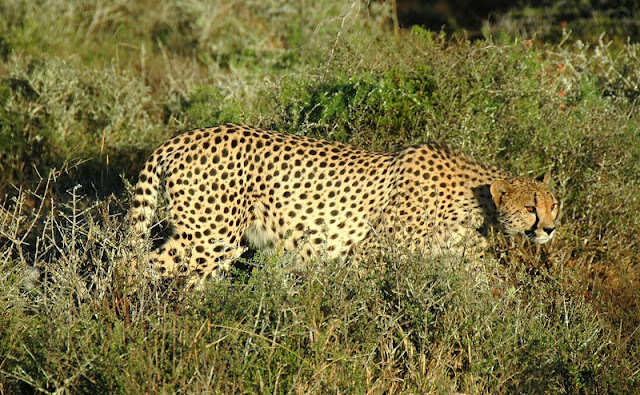 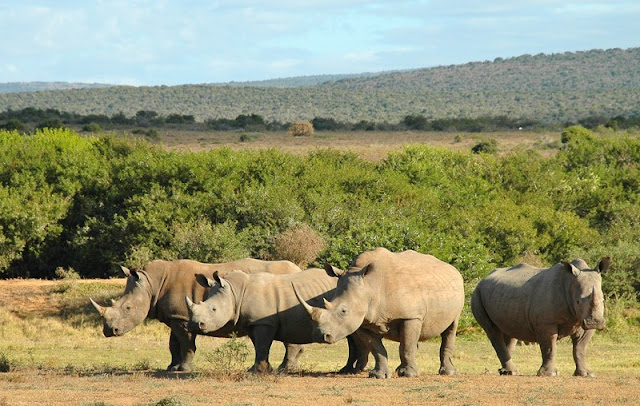 Kwandwe certainly has a wonderful diversity of species. For example we were fortunate on two occasions to see bat-eared fox, I rate this highly. So with regular and good sightings of four of the Big 5, leopard eluding us, (although the Rangers advise that they do get sightings of these large cats and these viewings are becoming more frequent and better too) we settle for a number of cheetah sightings instead! I’m happy with that. Happy too with the general density of the animals, frequency of sighting and then of course the highly professional team who found the animals for us and who would then offer a most interesting discourse with regards to its lifestyle, habits or other features. 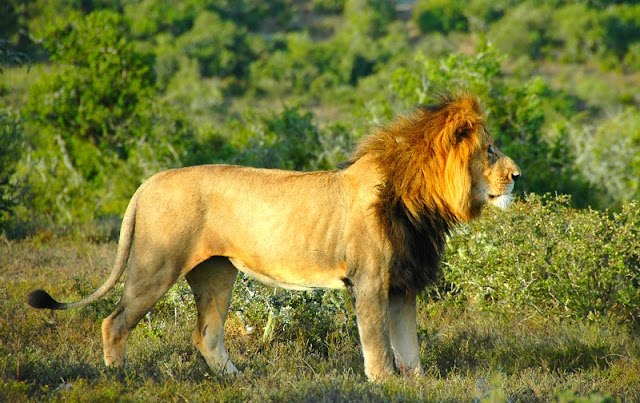 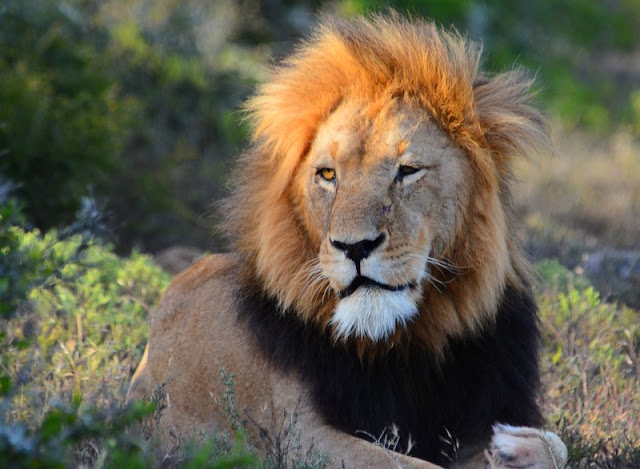 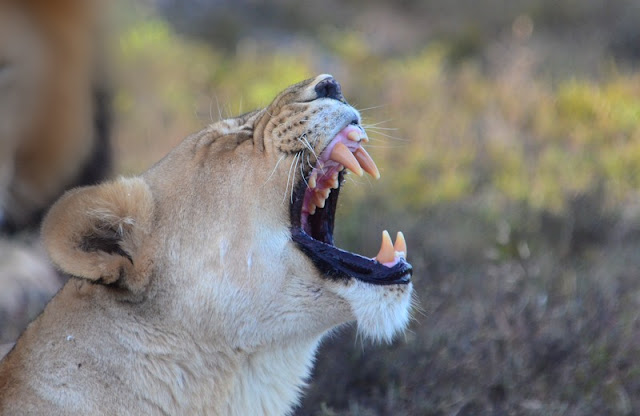 Andy really was an incredible ‘spotter’ of the invisible animals around us, patiently pointing them out. Not only did he substantially enhance our game viewing experience, so too did he create the most delectable of crumpets, on one breakfast stop,  cooked to perfection, 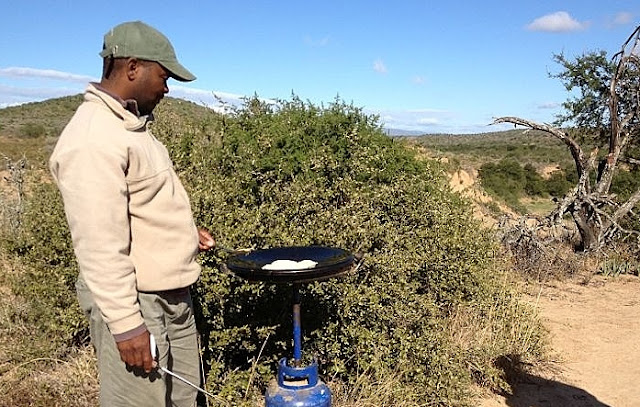 Ryan produced his contribution,  a variety of toppings, fresh cream and honey, syrup, chocolate and..... so we all sat that glorious early Autumn morning,  sun on our backs, on the bank of the Great Fish River as it gurgled by, a herd of relaxed elephant browsing below  and each of us, with fresh baked crumpet in hand off silver platters, downing our coffee – life isn’t at all bad at Kwandwe Private Game Reserve !

Melton Manor
Graeme Mann was good enough to take Lana and I to have a look at some of the other venues on Kwandwe Private Game Reserve. Melton Manor is a purpose built manor House, and as a smaller venue is ideal to be booked in its entirety by families, a group of friends or even for a small Corporate get-away. 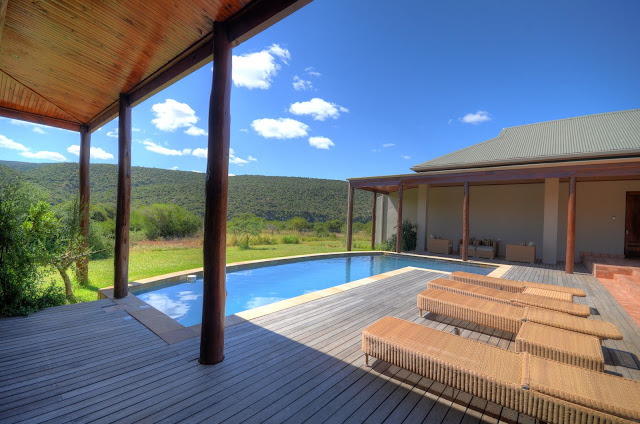 The four luxurious suites lead onto the central U-shaped courtyard area with centralised swimming pool and magnificent views over   the mountains with their  afromontane forests spiked with the Cape candelabra euphorbia in profusion – a delicacy for the black rhino I would presume. 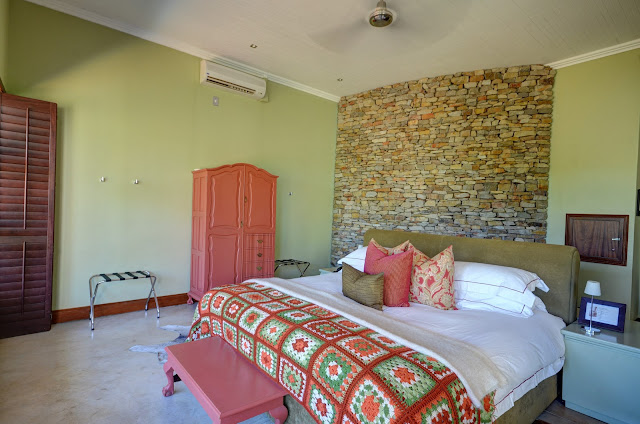 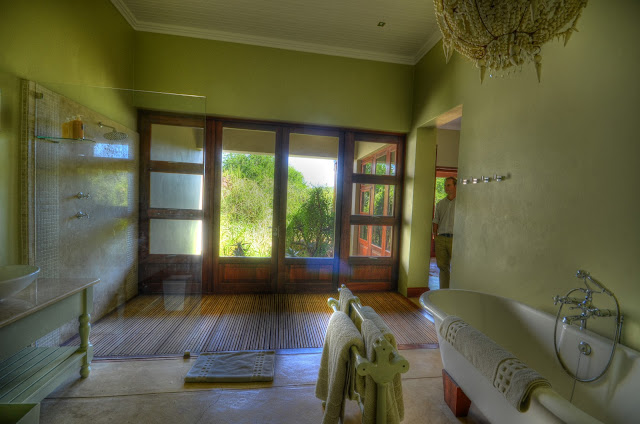 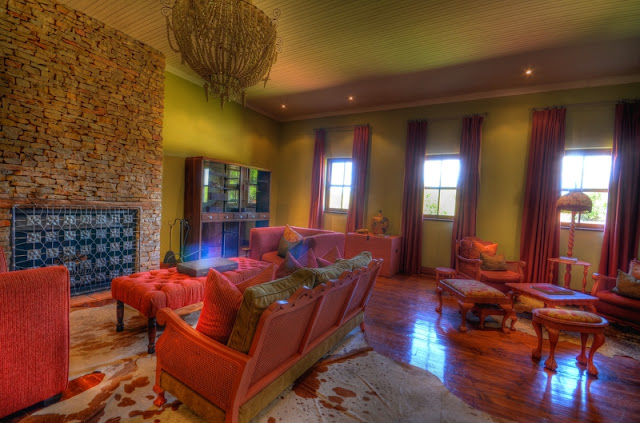 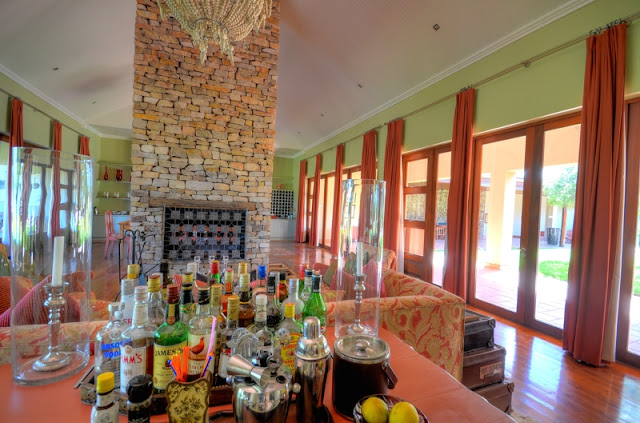 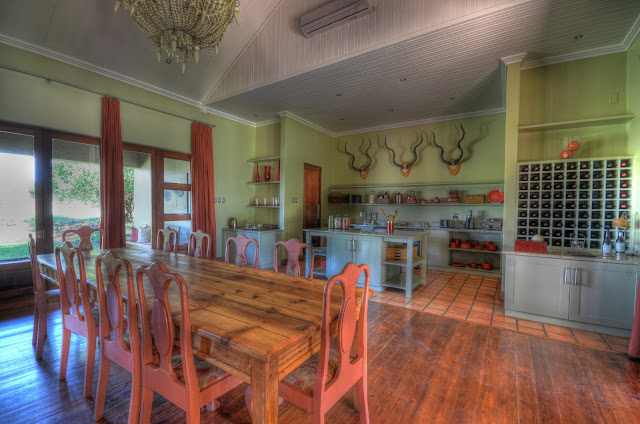 Great Fish River Lodge
River lodge is the largest of the Kwandwe Game Reserve venues sleeping a maximum of 18 guests in 9 suites. These luxurious rooms each have their own private plunge pool and lovely views over the nearby Great Fish River.  Animals come to drink, otters gambol and one may just sit and enjoy this rather African environment. 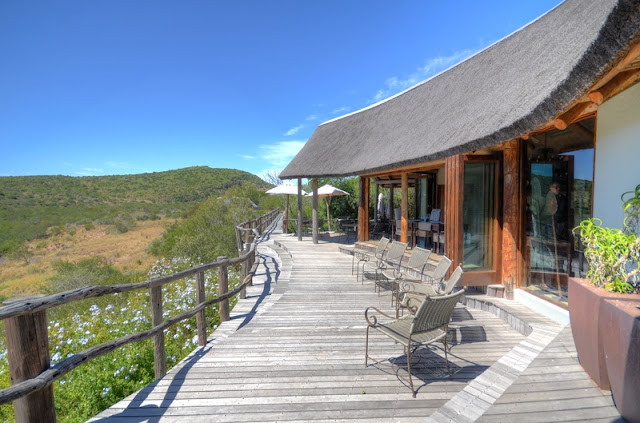 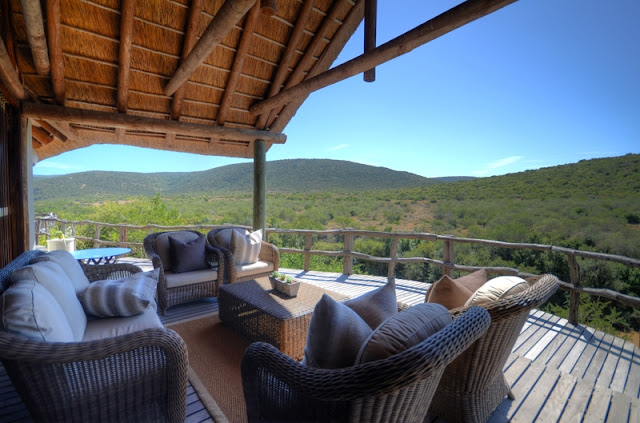 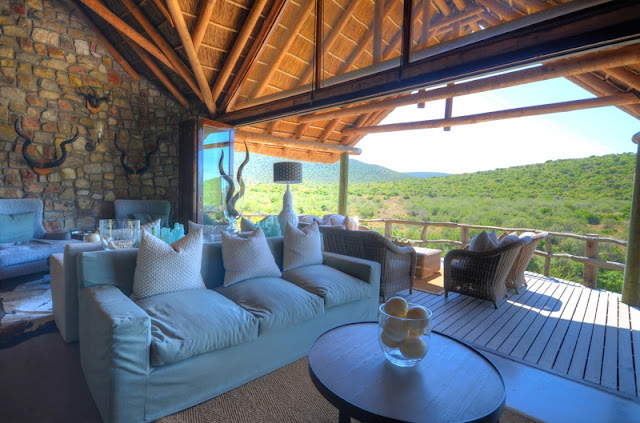 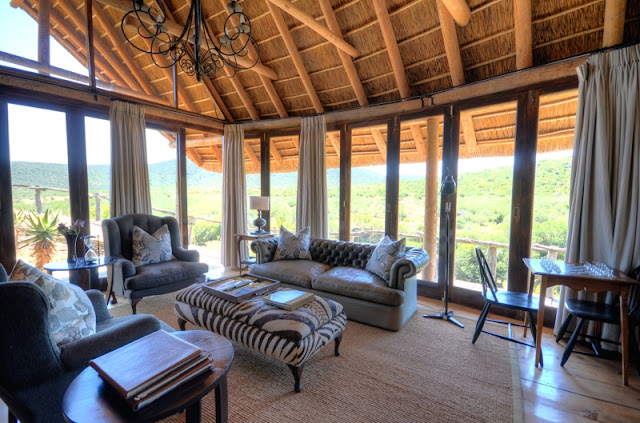 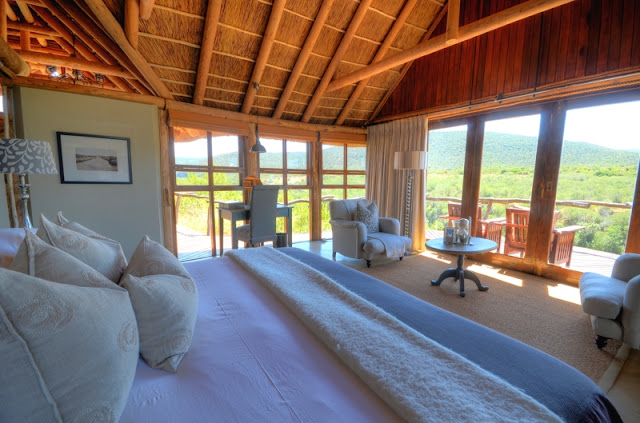 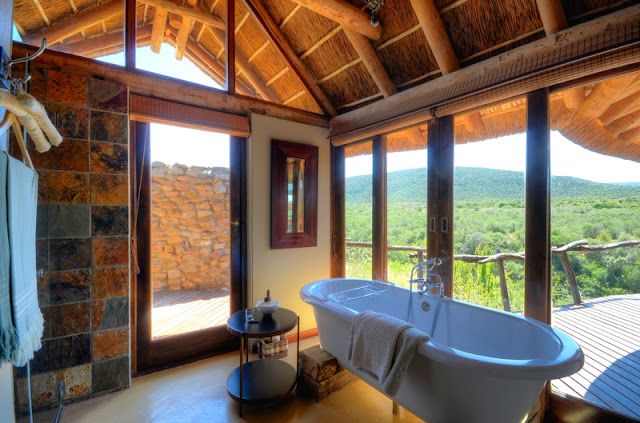 Uplands Homestead
We hope  to visit Uplands Homestead on our next visit. One of the original homesteads on the property. Upgraded and modified to suite Kwandwe’s guests.

Posted by Far and Wild Safaris at 6:25 AM No comments: