The Rhino River Lodge is a 3 star venue located in the ‘developing’ 23,000 ha Zululand Rhino Reserve. A recently proclaimed game reserve in northern Zululand, that I believe in time could rival many  of the finer Big Five wildlife destinations in South Africa.
It all started with the dropping of fences by the land owners, the introduction of numerous species that were previously found in the area. To now, where there are all of the Big Five roaming freely in this still unspoiled bushveld environment. 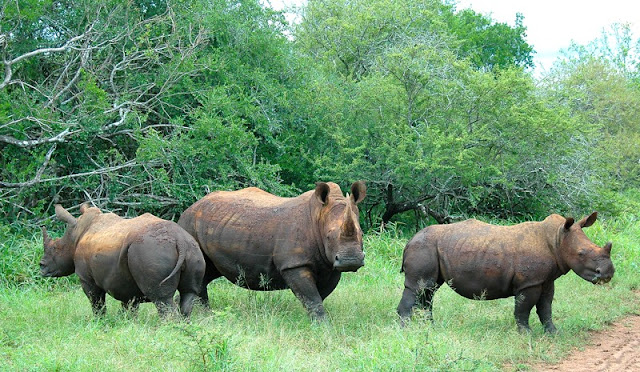 One of the greatest benefits for this area, was when it was chosen to be part of the “Black Rhino Relocation Project”, with a number of these cantankerous pachyderms being successfully released into the Zululand Rhino Reserve. With the addition of a small nucleus pride of lion, so the prime concept was achieved and the Big 5 had returned.

Great care in the game management is being undertaken, with the intention that the animal population will grow and be sustained naturally by the balance of vegetation, herbivores and predators.  This is how it should be ! Be patient, the density of animals can only improve and the game viewing is already pretty good.
An easy three hours from Durban and Lana and I were at the entrance gate and access road to Rhino River Lodge.  From here one drives the 5kms through the reserve to the Lodge.

We arrived, stopped at reception, to be greeted by our wonderful manageress and hostess, Shona. As I opened the door my glasses misted up, no, it was not the sight of Shona, just the intense 41degree Zululand pre-storm heat at mid-day, wow. My glasses cleared, Shona’s smile returned and we checked into this rather delightful bush Lodge.


Chalets scattered around a grassed  indigenous garden, set on the banks of the normally dry Umsunduze River. 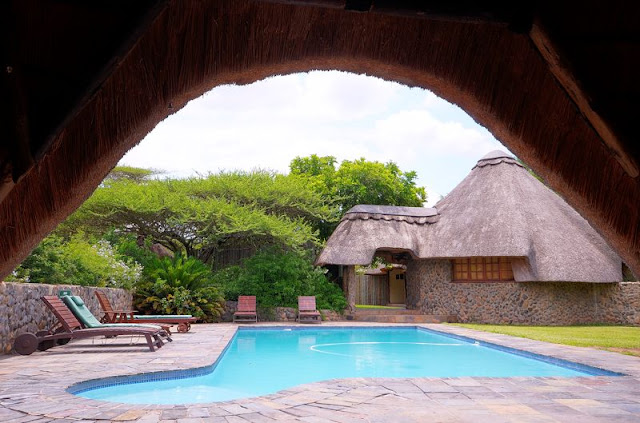 The grass lawn gave way to long grasses, shrubs and then Fever and Sycamore Fig trees,  creating an attractive riparian forest down to the sandy river bed. A refreshing drink as we acclimatised to the heat, became familiar with the Lodge facilities, and reveled in the cacophony of bird calls, delightful! 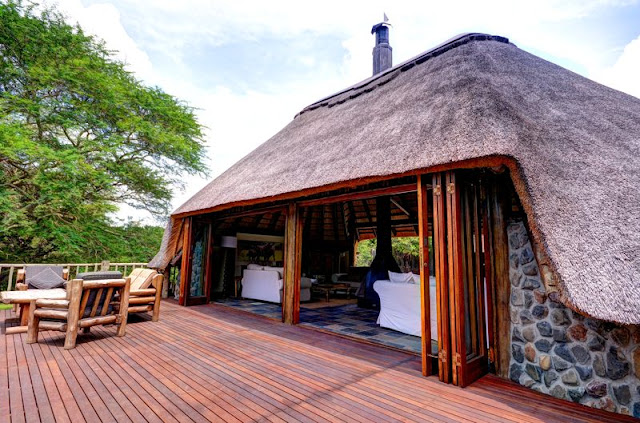 We met Alison at lunch, she was to be our guide. What a pleasure to have such a pleasant and knowledgeable lass taking us on the game drives. I always marvel at the way these young girls so competently manoeuvre the large heavy game drive vehicles. Must be a chauvinistic mindset thinking they shouldn’t be able to, Alison was an excellent driver in the very slippery conditions we were to experience there over the next few days – the storm was brewing. 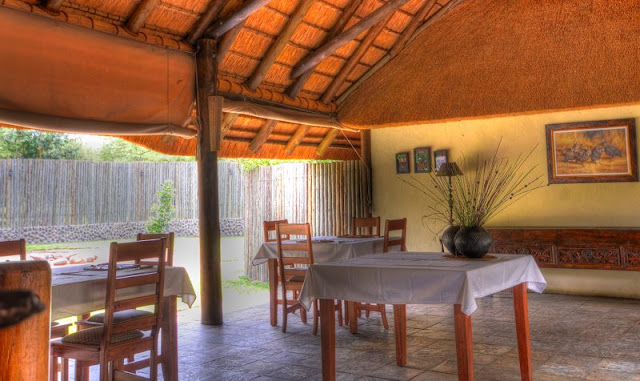 The meals at Rhino River Lodge were really excellent, what I liked too, was that before the afternoon game drive, each guest was asked which choice of mains they would like, same at breakfast too, with the traditional cooked breakfast being “full house” and some.  Shona,  I really like your input and improvements to the commissary department. All we need is the return of the good coffee machine - broken !
The traditional thatched rooms were very comfortable, large windows and sliding door onto one’s own ‘private’ deck. 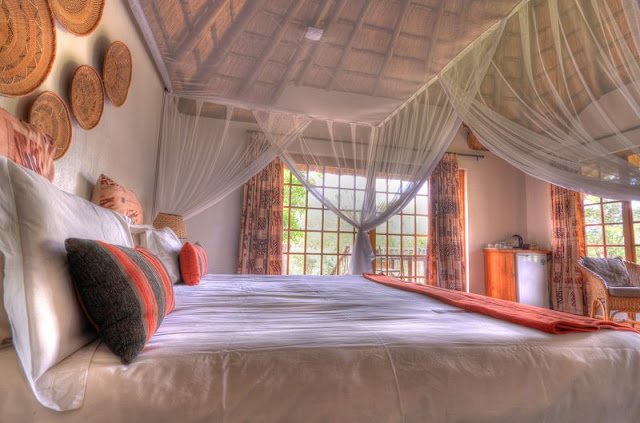 Ceiling fan and then a four-poster type mosquito net. This was fine, but the net seemed to deflect the cooling breeze and at 40 degrees, every bit of cooling was needed.  I believe air-conditioning could be on the cards with a recent upgrade in the local power-lines. I would heartily endorse the owners seriously implementing this improvement to the rooms soonest. 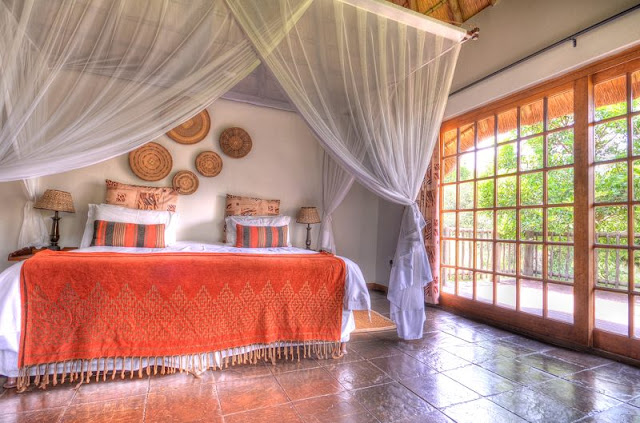 There is a bar fridge / tea station with some rather delish lodge biscuits. The rooms were being redecorated when we were there and the new paintwork giving each a lighter and brighter colour combination. The bathrooms have large showers but no bath.
With the storm on the make  Alison thought it might be prudent to depart a tad earlier. With our cameras in their waterproof cases we departed – all set to see what this section of the Zululand Rhino Reserve had to offer.

How lovely to have a cool breeze as we trundled through the bush in the ‘open’ game drive vehicle. Loads of antelope here  and ..shhhuuu... a few .. or more white rhino too. 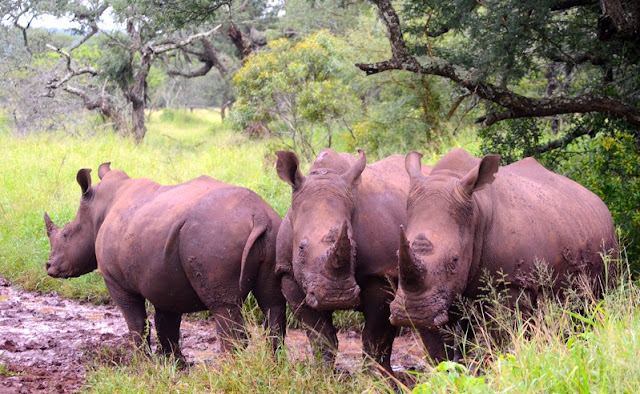 Lovely sightings of all these and it was only the wildebeest that seemed rather skittish. 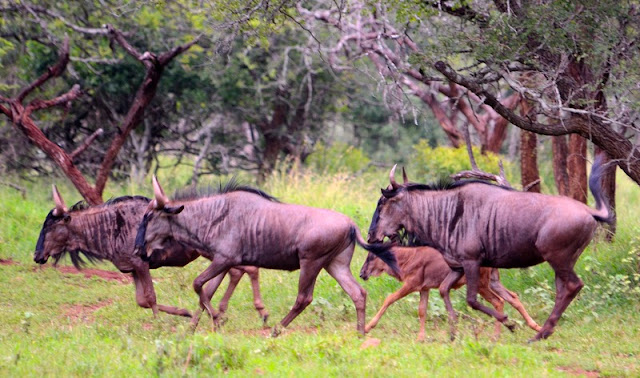 The impala groups with their rapidly maturing young, most born from mid November on, were prolific.  Waterbuck, kudu, nyala,  giraffe and even common reedbuck were  here, then a jackal and of course  numerous warthog, also with their young . 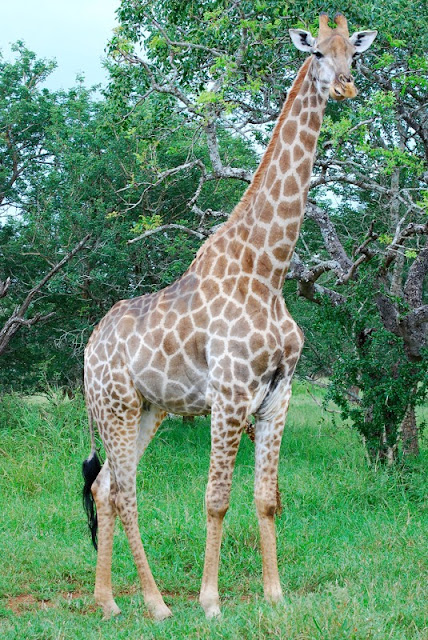 The raptors were here too, with quite a variety evident. Numerous Common steppe Buzzards,  Black-shouldered Kites, Wahlberg’s Eagle as well as Tawny Eagles and was it a Lesser spotted Eagle? Yip, and  then yet another with its back to us which I could not properly I.D. 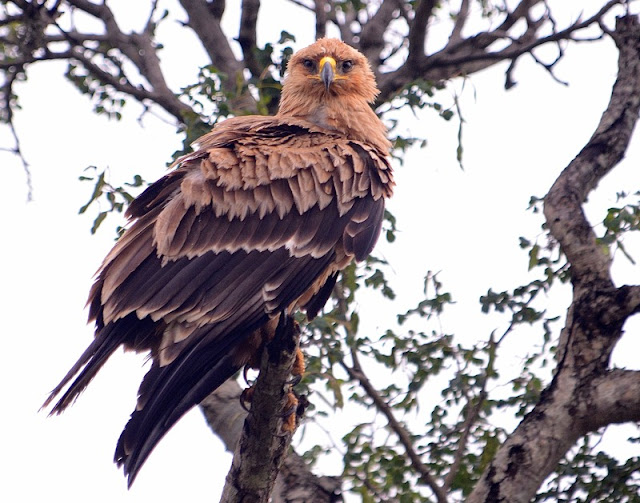 With the recent rains, the roads were wet and it appears that so many of the roads and tracks in the Zululand Rhino Reserve become almost impassable in such conditions. To save the integrity of these roads the Rangers  do not use them  when in this state, to avoid  making them even worse to negotiate. I have experienced this reduction in traversing area when visiting Leopard Mountain Lodge, a nearby venue in the same reserve and now again here. The rain arrived late that afternoon and there was substantial precipitation. I felt for Keith Marralich, who was conducting one of our tours in the Kruger Park area, and the flooding that they were experiencing there. It rained most of the night and was still intermittent in the morning.   Rain birds all around!

As dawn broke I walked onto the deck and there was the Umsunduze River, being a proper river, it had risen substantially and was coursing down at a great rate carrying logs and all sorts with it. We were pretty sure but hoped that the animals were not caught up in this melee. We went out on game drive. Limited though the road access was, we had some reasonable sightings, to my delight the birdlife suddenly received a lot of attention and some of the 'lesser' animals. 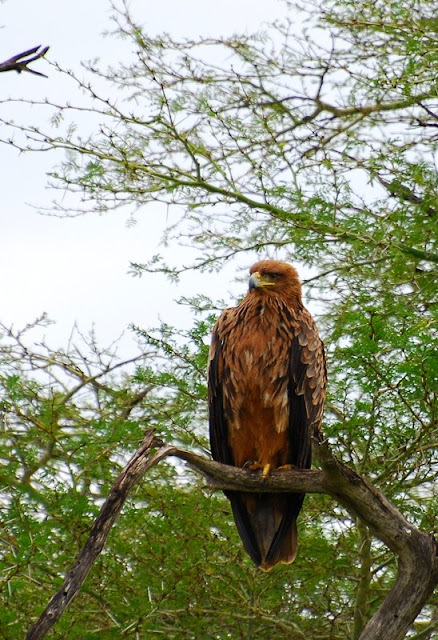 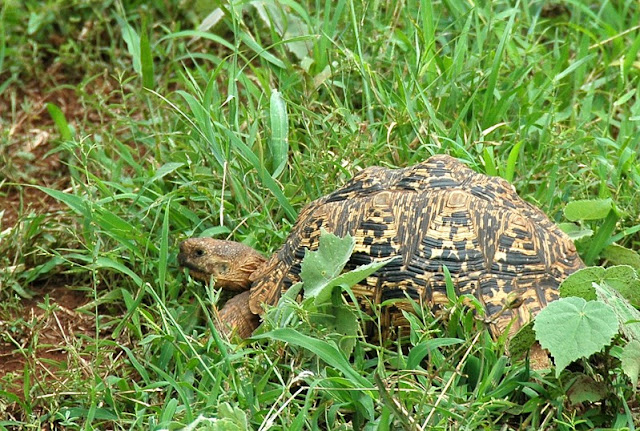 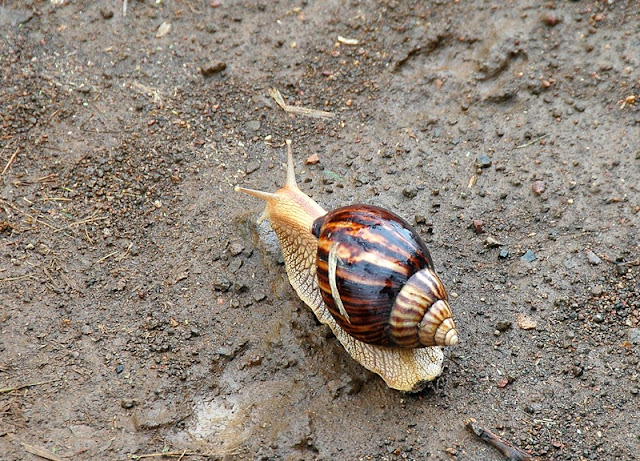 We even saw the spoor of a herd of buffalo that had passed by. Ordinarily one would have ‘tracked’ them,  but today was a case of slip and slide on those clay soils, so we had to remain on the hardened,  all weather roads and let them be. In time I hope the reserve ‘hardens’ a lot more of the road network. A priority?  I would say.
So a lovely fairly typical thatched bushveld Lodge (aesthetical pleasing and preferred) which the owners appear to be continually upgrading. 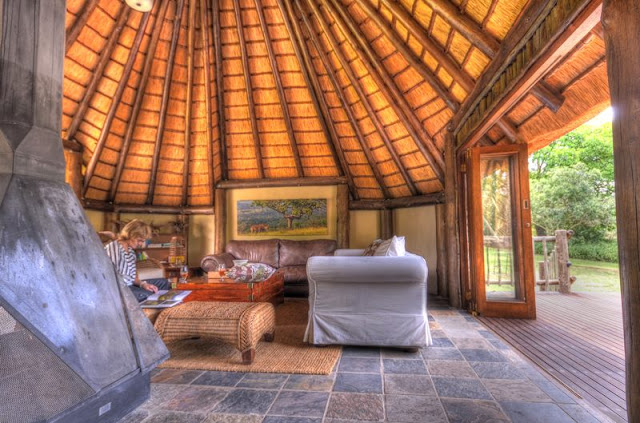 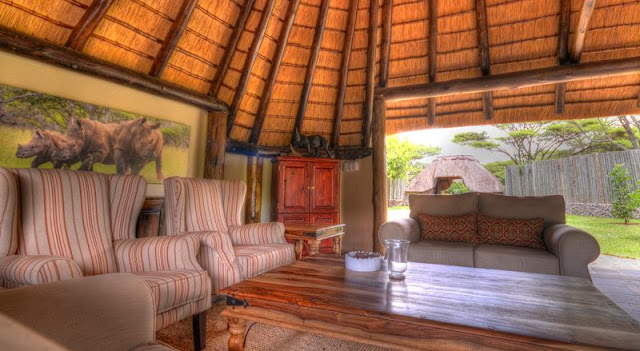 Easy access, we arrived in a saloon car and despite the poor weather and section of poor district road, managed to leave without getting stuck. The staff were super,  caring and very capable, particularly on the game drives and in the kitchen.  I have yet to see the Big Five in this reserve from any of the Lodges, its lion and leopard that we have not been successful in finding here, but giving the improvement in the game viewing experienced on the drives each time we visit, it’s not too far away when this reserve will be ranked right up there for excellent wildlife sightings. 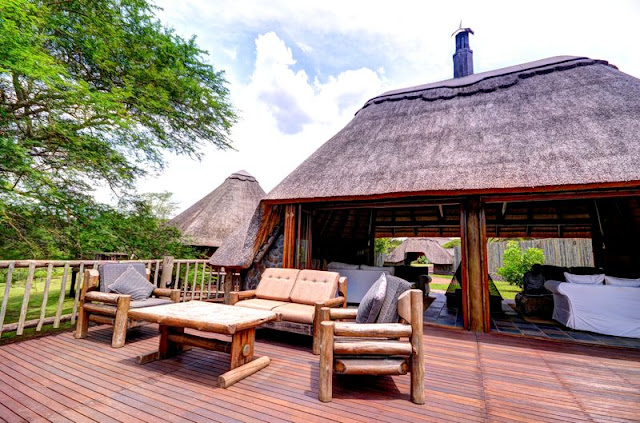 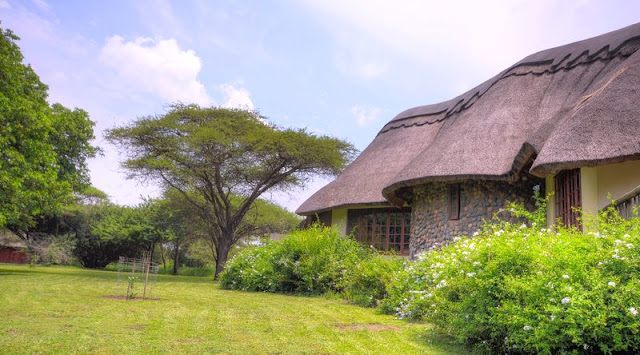 Photographs by Jeremy and Lana Williamson

Posted by Far and Wild Safaris at 6:49 AM No comments: