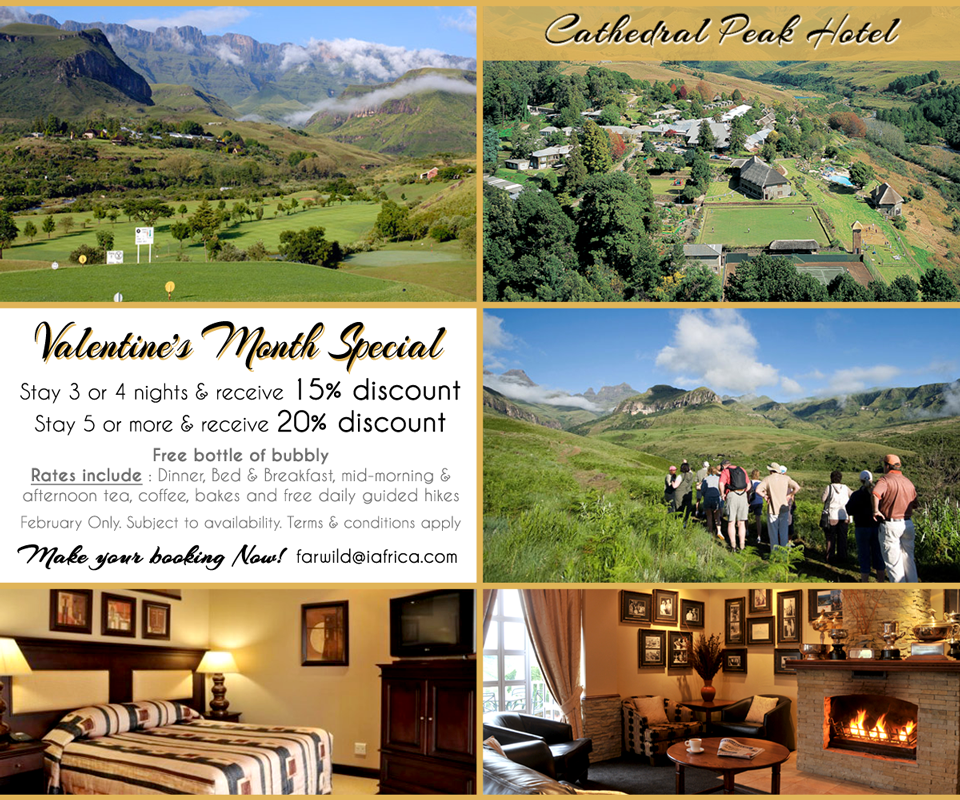 Stay 3 or 4 nights and receive 15% discount
Stay 5 or more and receive 20% discount
Free bottle of bubbly
Treat your loved one to a romantic getaway in the beautiful Drakensberg Mountains.
Enjoy a round of golf, helicopter flip, picnic in the mountains and much more...

Read more about Cathedral Peak Hotel
Posted by Far and Wild Safaris at 11:52 PM No comments:

Valentine's Accommodation Special
Forgotten to Book Something Romantic for Valentines?
Then do not stress, here is an amazing New Special! 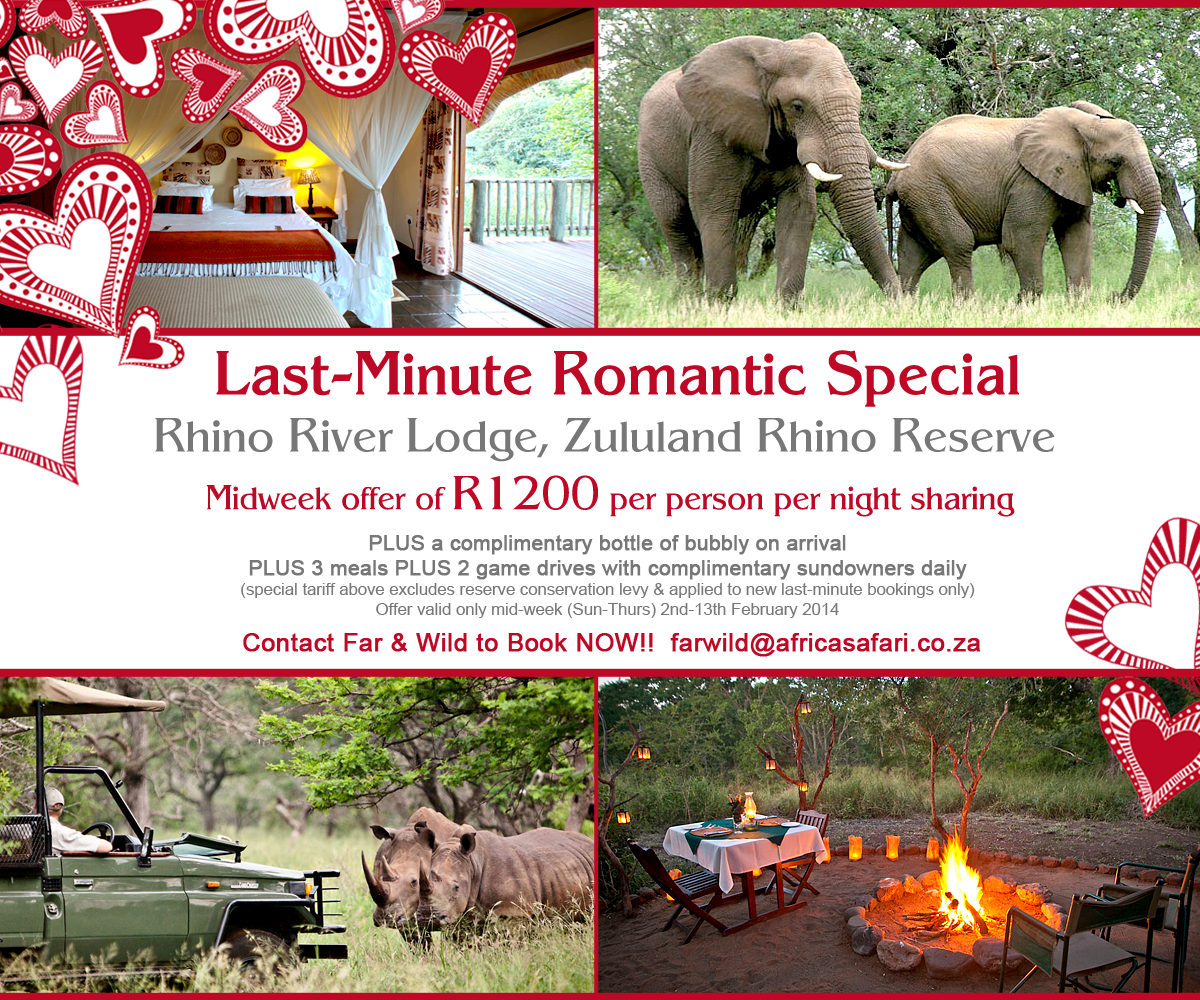 Posted by Far and Wild Safaris at 5:49 AM No comments:

Well, so 2014 had begun! My first trip of the year commenced on the 2nd January and I was looking forward to it – the clients on this trip were a family of four and we were to visit the Sani Pass and Nambiti Game Reserve, and end our tour in Johannesburg. The idea was that I was to collect the clients from the airport in Durban, make our way via the Midlands Meander to Moorcroft Manor in Himeville, where we were to stay for two nights, go up the Sani Pass and into Lesotho and then spend two nights at the Elephant Rock Lodge in the Nambiti Game Reserve. This was also the first confirmed reservation for any of our new itineraries that included the Drakensberg and Nambiti Game Reserve which had been published on our web-site recently, so I was excited. (If anyone is interested in the itineraries (and remember, we can tailor-make any itinerary to suit you) have a look at (http://www.africasafari.co.za/guidedtours.htm).

The first (and I may add, the only) change to the plan was that upon arrival at the airport, the mother declared her wish to see some of the sights of Durban in lieu of visiting the Midlands and the rest of the family concurred. I could not change her mind, but maybe this was because I did not try hard enough, so off we went to Durban. Remember, this is the 2nd January and everyone was still in holiday mood, so much so that it took me almost two hours to travel from the Blue Lagoon in the north to uShaka Marine World in the south! Those of you who know Durban will also know that this is roughly a distance of eight kilometers, so should not take two hours (and in fact would normally take about 10-15 minutes), but it did. Traffic was bumper to bumper and not a single parking space was to be found anywhere along this 8-kilometre stretch (they had expressed the desire to stand in the warm waters of the Indian Ocean – they has just arrived from Cape Town with its freezing water) but this was not to be, we could not get close enough to any of the beaches.

We eventually exited Durban and arrived at Moorcroft Manor in Himeville, at the foothills of the Drakensberg, in the late afternoon. Moorcroft Manor is well worth the visit and their meals on offer are quite superb and not too expensive. Breakfast is included in the tariff and lunch and dinner is on an a la carte basis. Moorcroft Manor must arguably have the finest restaurant in either Underberg or Himeville Their rooms are spacious and are surrounded by a well-kept, large garden that also has a lovely rock-pool swimming pool (which is probably not used in the winter months – this area gets cold).

I was up early the following morning, well before breakfast, and a heavy mist was hanging over the area. This is a common occurrence at the foothills of the Drakensberg and usually is a good indicator that the day will be hot – it was! I pottered about the property photographing spiders and their webs (I had too, there was nothing else to see until the mist had burned off) and then, almost instantaneously, the mist was gone and Hodgson’s Peaks in the distance were visible.


The clients were collected after breakfast from Moorcroft Manor and proceeded to venture up the Sani Pass for the day in Lesotho. The Sani Pass was originally developed as a bridal path as early as 1913. This steep zigzagging pass climbs the face of the Drakensberg escarpment to an altitude of 2874 metres. The first vehicle negotiated the path in 1948 when it was a boulder littered donkey track. It is now used by 4x4 vehicles and has become a highlight for tourists visiting the Southern Drakensberg. The Sani Pass is the only access from KwaZulu Natal into the harsh environment of the Lesotho Highlands, the domain of the endangered Bearded Vulture, Basotho shepherds and their animals. Close to the Sani Pass summit, within a couple of kilometres, is the highest peak in Southern Africa, Thabane Ntlenyana, at 3482 metres. Here in Lesotho they visited a Basotho village, enjoyed some very tasty “pot-brood” (a bread made in an cast-iron pot over heated coals), visited the sheep-shearing station (only operational in summer) and stopped in at the “highest pub in Africa” More importantly, they drank in the stunning views of the mountains – quite magnificent.

The following morning after breakfast we departed for the Nambiti Reserve and it was again brought home to me that this was the holiday period – all the roads were jam-packed with holiday-makers returning home and at the service station near Estcourt, vehicles were queuing for fuel and people were queuing for the facilities. Men are lucky, we did not have a queue but as for the ladies…they must have been thirty to forty in the queue!
We arrived at Nambiti in good time and from the car park we were whisked off to the Elephant Rock Lodge where we were to stay for two nights. I am not going to expand too much on Elephant Rock Lodge – I have covered this in previous blogs, as has my boss, Jeremy – see  http://farandwild.blogspot.com/2011/05/elephant-rock-lodge-nambiti-private.html, and http://farandwild.blogspot.com/2013/10/elephant-rock-lodge-nambiti-game.html. to get some idea of this lodge and to view the photos that go with them. I must however take this opportunity to thank the staff for our great stay, Stephanie, our guide, Steve, (the snake catcher) and some-time lodge manager and Lee-Ann, the manager, you all made us feel welcome.
So, let’s not beat about the bush and rather go into the bush and see what we saw – among other, black and white rhino, kudu, jackal, Amur falcon, buffalo, giraffe, hippo, elephant, hartebeest, and lots more. We also saw a pride of lion, three females and a male, but they were very far away and it was impossible for us to get closer, but we were happy with the sighting. On all the drives we saw elephant, plenty of young animals, such a young warthog, zebra and buffalo, impala, giraffe and so on and so forth – let’s not get bored with lists of the animals that we saw – all the game drives were good.
Lastly the weather – for all five days, both in the Drakensberg and at Nambiti, the weather was superb. In the late afternoons the heavy clouds gathered over the mountains, the lighting strikes could be seen in the distance, but no rain fell. In the early morning the mist lay thick over the area, but in a blink of an eye, this burned off the produce stunning warm days. At Nambiti it was hot, but not unbearably so, and the first rain drops that we experienced were about 40 kilometres south of Johannesburg – and probably no more than forty seven drops in total!

My final word – go to Nambiti, you will not be disappointed. Oh, and you may as well go via the Sani Pass too, why not?

Posted by Keith Marallich at 1:56 AM No comments: