Mpila Camp is a self-catering accommodation venue in the Umfolozi (southern) sector of the Hluhluwe Imfolozi Park. Accessed off the N2 north from Durban, by taking the exit at Mtubatuba onto the R618 (traveling west) to the game reserve, approximately 2,5 hours to the gate from Durban and then about 45 minutes to Mpila Camp, at game viewing speed, well it really depends on the game sightings en route.
The horrendous condition of the road network in the Hluhluwe Imfolozi Park is being addressed, with  substantial  refurbishment of the tarred sections already completed in this southern sector. There is still much to be done to repair the tarred roads in the northern Hluhluwe Game Reserve sector, which are badly pot-holed. Repairs are estimated to be completed by the first quarter of 2016. On a recent visit to the Hluhluwe Umfolozi Park I traveled the dirt roads extensively and found them to be in fairly good repair with some being very good.


Mpila Camp has accommodation for 100 guests in chalet and tented units. The chalets have panoramic vistas eastwards over the Hluhluwe Umfolozi Park. Mpila Camp is not fenced, although there is a ‘high’ elephant deterrent electric wire around the camp. This seems to keep these large pachyderms out of the camp, whilst allowing all other forms of wildlife access, take care at night, take a torch and stay close to your accommodation.


The two 7 bed cottages are brick under thatch with 3 bedrooms, two with twin beds and the third bedroom having three single beds. No double bed options at Mpila Camp. 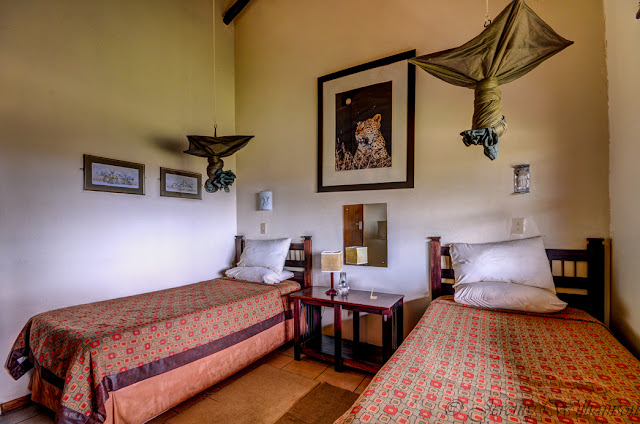 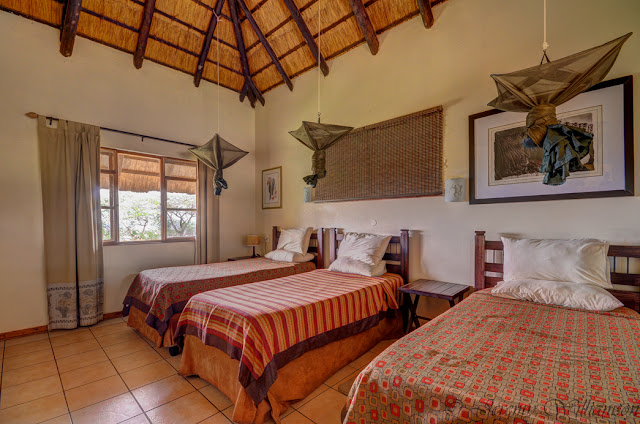 There is a large lounge / dining room leading out onto a covered veranda.


The kitchen is ample in size with a gas stove, electric fridge, a chest freezer and all necessary basic utensils along with a range of cutlery and crockery. Cleaning materials are provided. 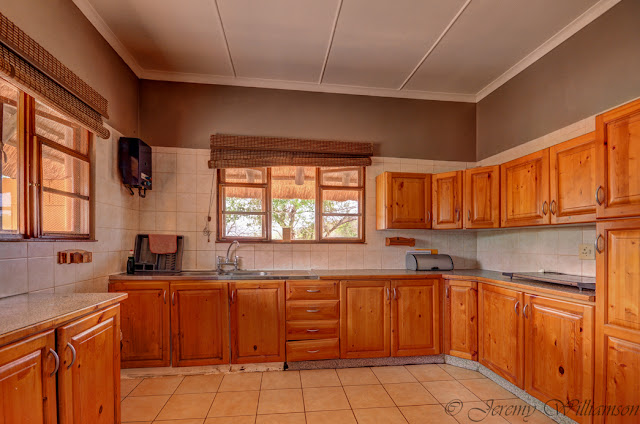 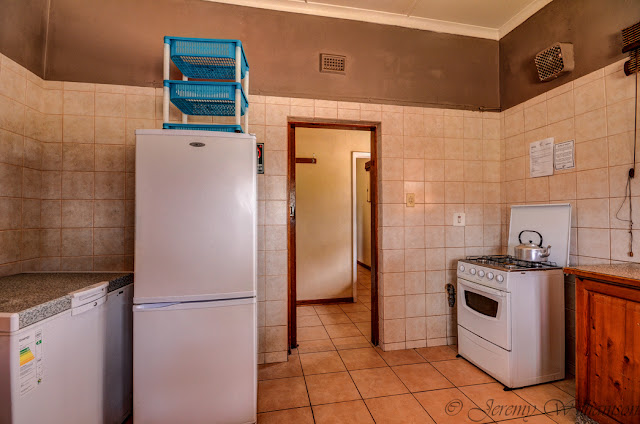 
Off the veranda and away from the rather vulnerable (to fire) thatched roof is a braai stand . Hyena’s patrol the camp in the evenings, hoping to purloin some tasty morsel, so be vigilant, they have been known to remove meat from the hot grid. 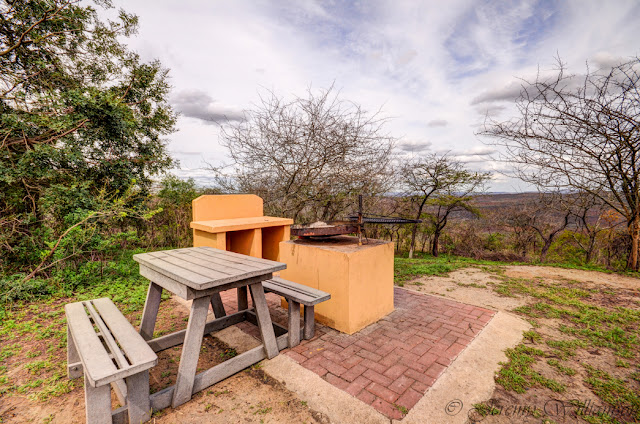 The services of a caretaker / cook is included in the tariff for the 7 bed cottages. The unit is serviced daily and the cook will be able to assist with food preparation during office hours. There is no air-conditioning at Mpila Camp as the electricity is by generator, (limited hours), there are ceiling fans in the rooms.

The six 5 bed chalets have two bedrooms, a twin and a triple, 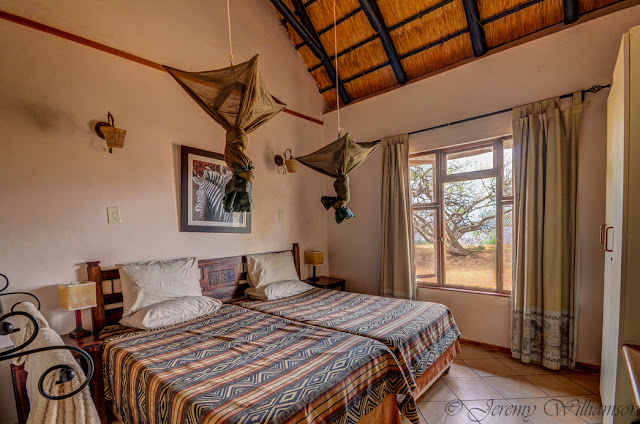 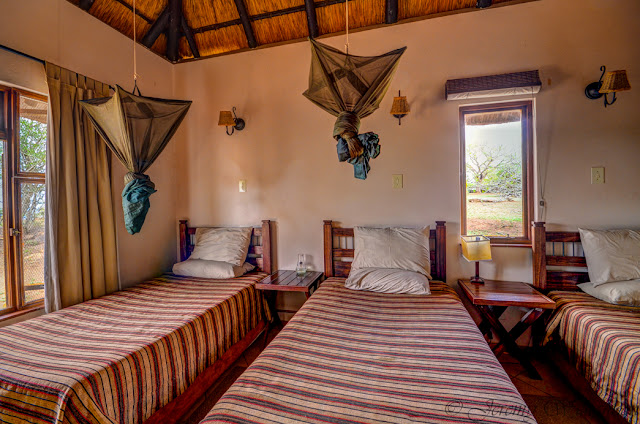 with a bathroom with shower and a separate toilet. 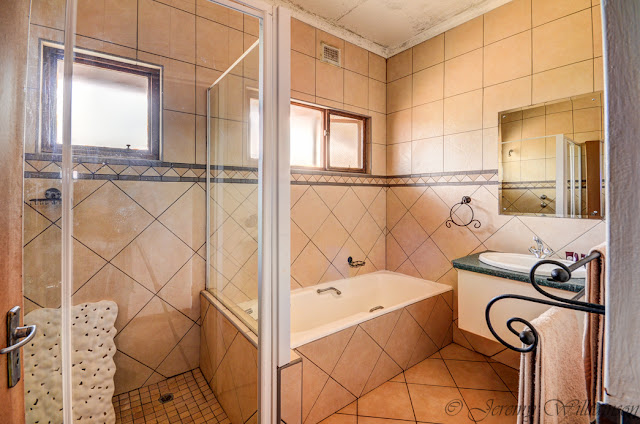 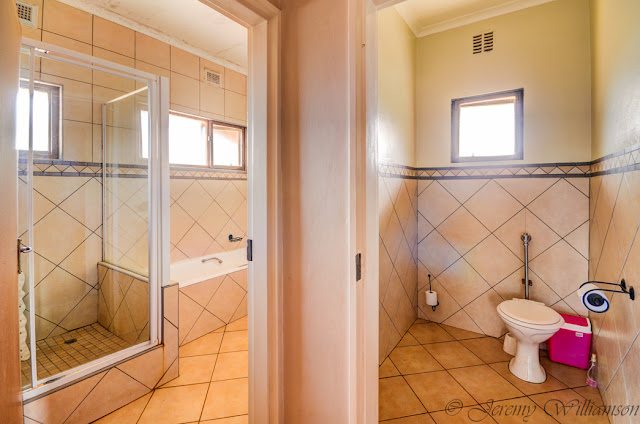 There is a lounge dining room leading out onto a covered veranda with a garden braai unit for guests to barbecue. 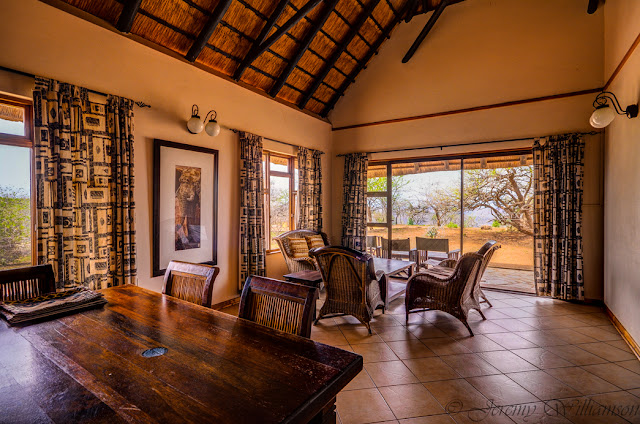 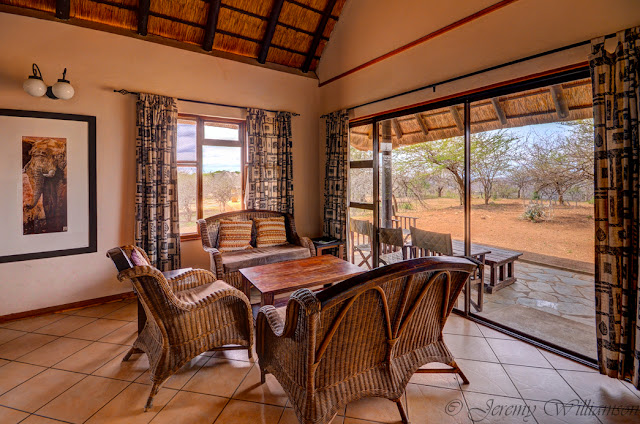 The kitchen has a stove and fridge along with necessary basic utensils, cutlery and crockery. These units have ceiling fans and are serviced daily. 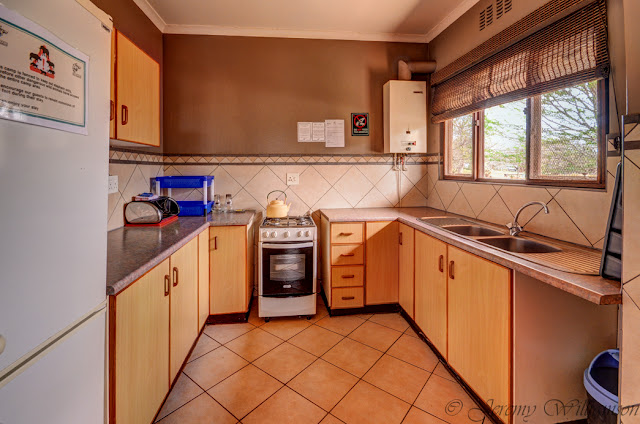 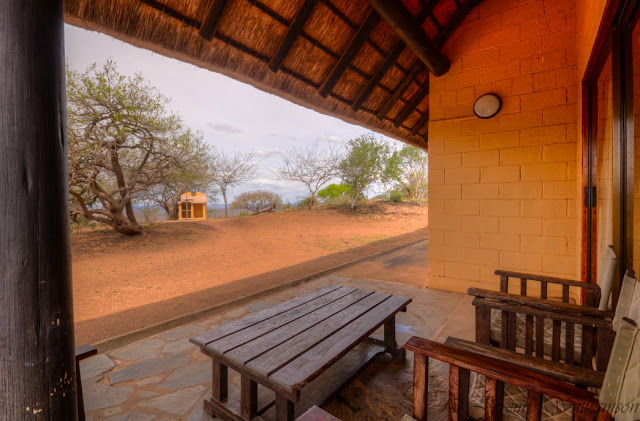 The 2 bed chalets are located in two groups of 6 units.

These rooms have the kitchenette within the main bedroom which includes a dining table as well. 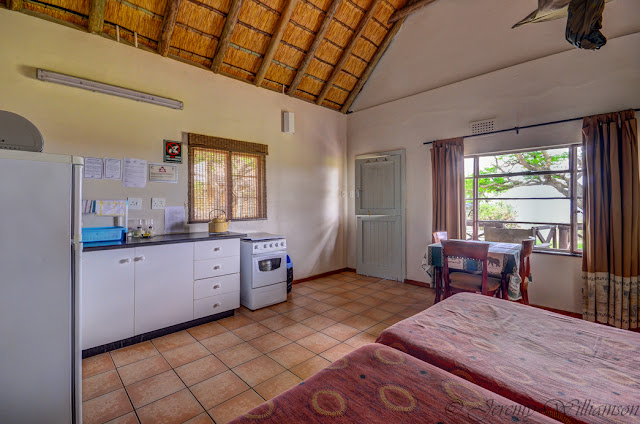 The en suite bathroom has a shower, hand-basin and toilet. 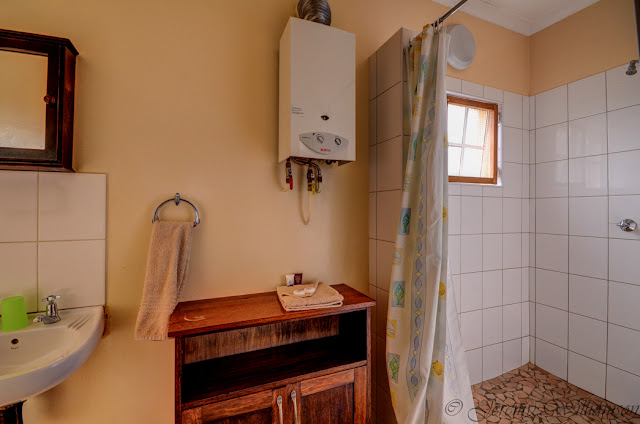 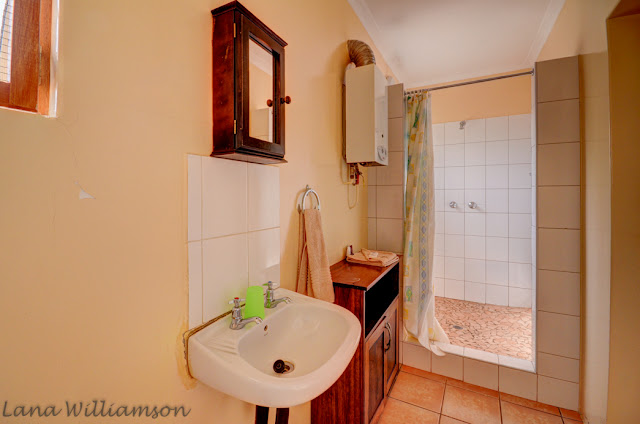 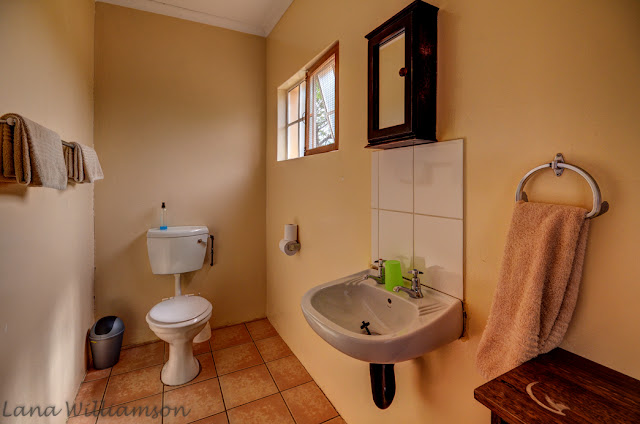 A covered deck leads out to the braai unit and has a gate to prevent the hyena entering the deck / chalet.

The safari tents, of which there are two 4 bed and twelve 2 bed units, are set on the western side of the camp, in a grove of Black Monkey Thorn, Acacia Burkei which provide some shade.

Each of the zipper doored tents have their own private shower, hand-basin and toilet en suite, this accessed through a wooden door. 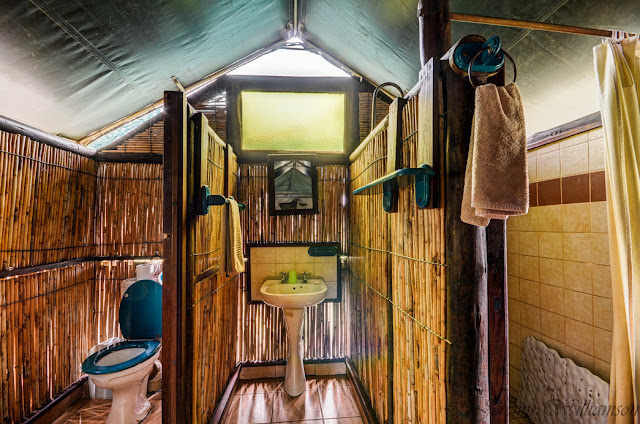 The tents are on raised decks with the kitchen units separate. These now have secure doors to prevent the filching by the local wildlife. 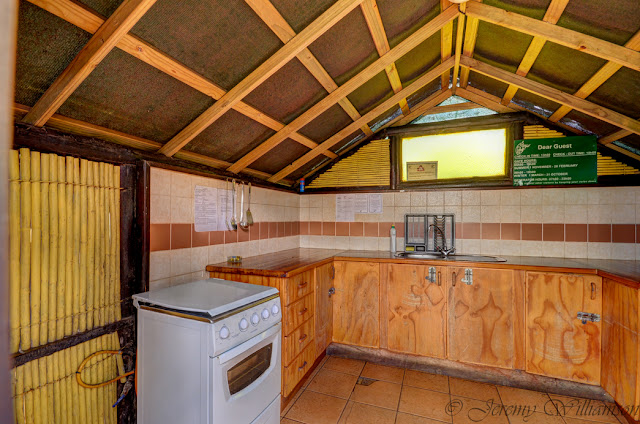 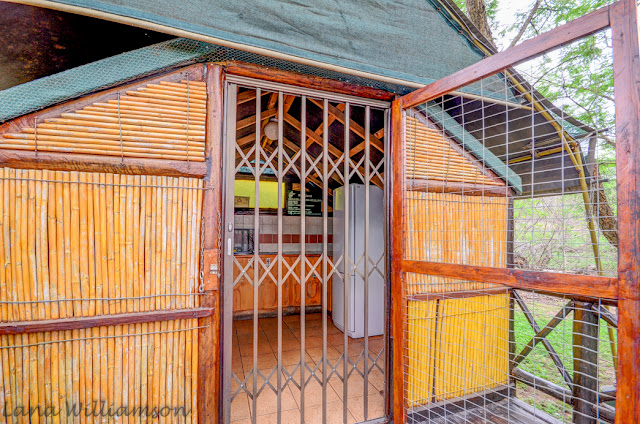 Along with the hyena and bushpigs, the vervet monkeys and baboon can be a nuisance. I have seen monkeys entering a car to see what food they can filch whilst guest were busy unpacking. They are pretty quick and  daring.
Off the deck, each of the tented units has a braai stand. 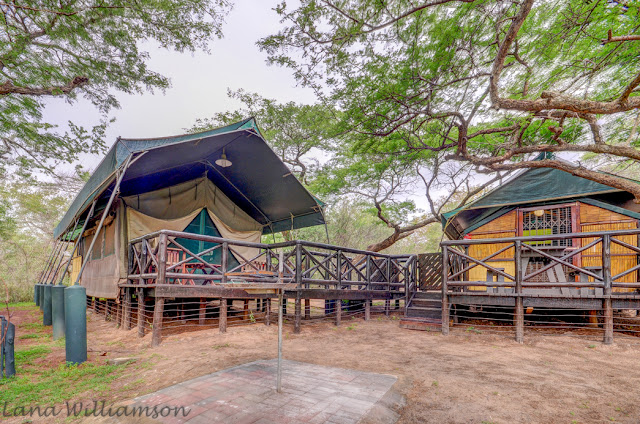 There is a shop at Mpila Camp where basic supplies can be had, I suggest that you do bring all you deem you will need, as supplies can be erratic. Ice, beers and wines can be bought at the shop. The water is safe for bathing and cooking but it is suggested that you supply your own drinking water.
Unleaded petrol is available at Mpila Camp. Check that they have stock of petrol before allowing your tank to get too empty. Mpila Camp has been known to run out of this fuel supply. Diesel is available at Hilltop Camp some 47 kms away. Most credit card payments accepted.
The Hluhluwe Imfolozi Park is a low risk Malaria area in summer. Mosquito nets are provided over the beds.
Guided game drives are available early mornings and late afternoons into the evenings. These last approximately 3 hours, cannot be prebooked and may only be booked on arrival at the camp. 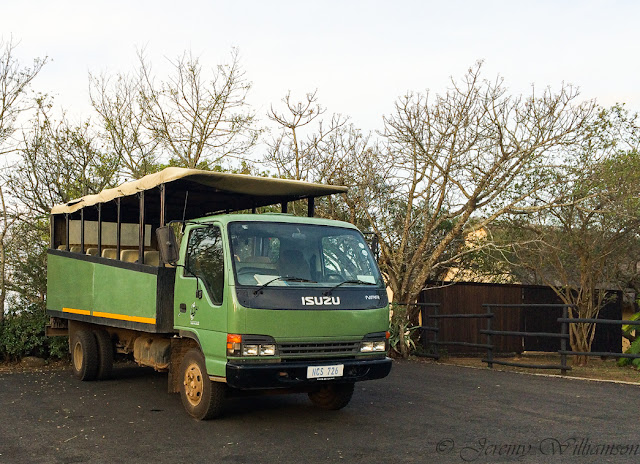 Guided walks are available, although these are limited to the availability of a ranger.
Maps of the Hluhluwe Umfolozi Park are normally available at the entrance gates and Mpila and Hilltop Camps. There are three gates to the Park, Nyalazi off the R618 from Mtubatuba / Nongoma, the Memorial Gate accessed from Hluhluwe village interchange off the N2, and the Cengeni Gate in the west which gives access to Ulundi.
On arrival at the gate you will needs provide your booking reference number, you will be given a form with all your pertinent info on it. On checking in at Mpila Camp this will be cross checked and an exit permit issued, keep it safe you will need it on departure.


Should you arrive at the camp after 18h00 when the office closes, your name will be on a board outside the office with your room number. Take up occupancy and check in at reception the following morning. 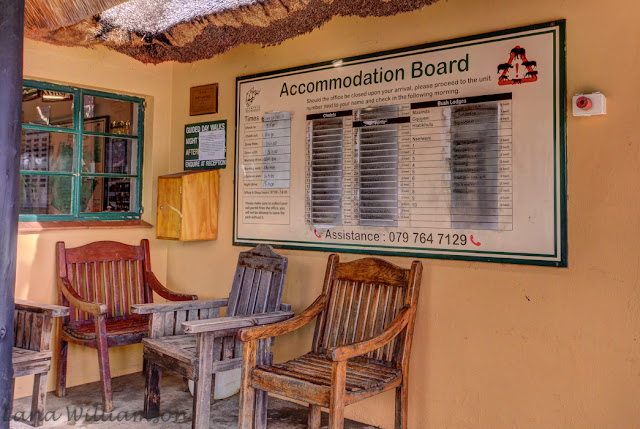 The norm is for guests to drive themselves within the Park, you may only use the public road network and may not get out of ones vehicle other than at designated points such as this pic-nic site on the Sontuli Loop. 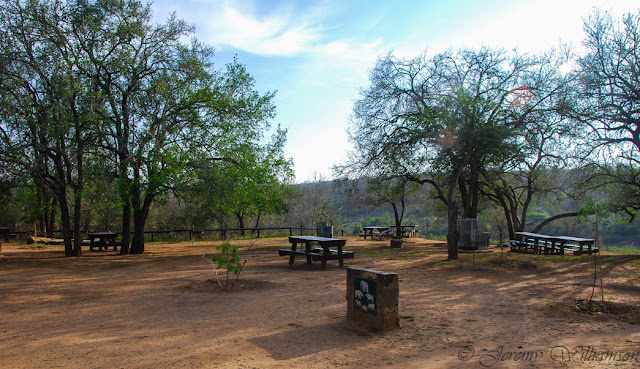 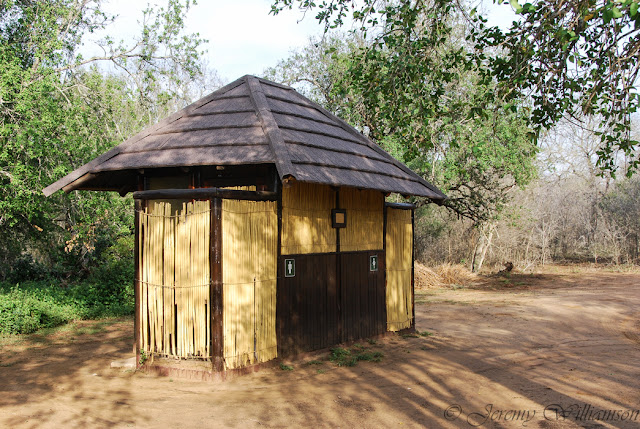 Guests may drive through to Hilltop Camp where there is a restaurant, this would only be available for breakfasts and lunches, as guests are not permitted to drive after the ‘gate closing’ at 18h00 in winter and 19h00 in summer. Its an approximate 1,5 to 2 hour drive from Hilltop Camp back to Mpila Camp, too late for dinner and then to get back timeously to Mpila Camp.
There are two hides in the southern sector of Umfolozi which are worth visiting, especially in winter when there is little surface water about. 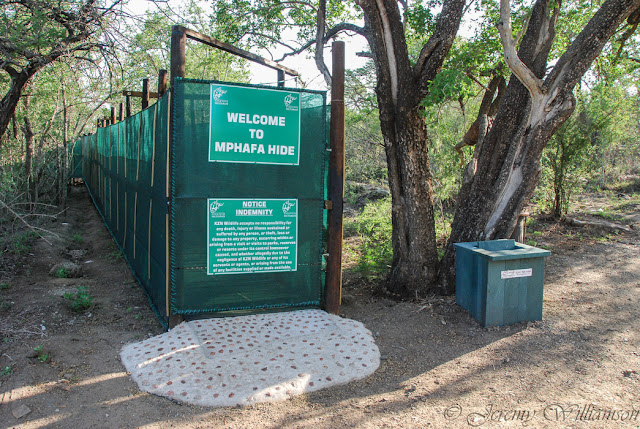 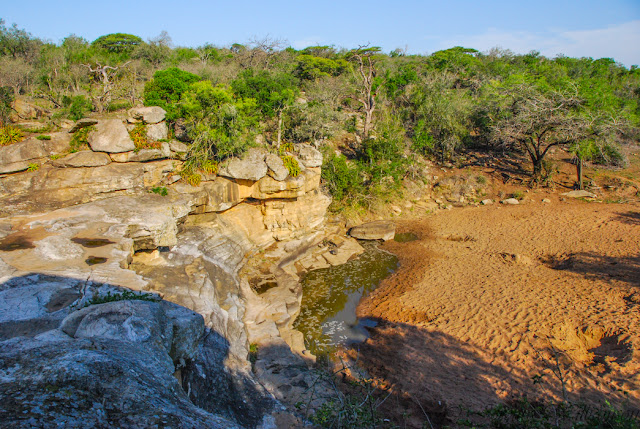 This was taken after a recent rainfall and the wildlife had moved to areas where the vegetation had been less impacted upon.

The accommodation in the Hluhluwe Imfolozi Park is generally well booked, it is important to prebook prior to your intended visit contact our reservations on farwild@africasafari.co.za for bookings and information.

Posted by Far and Wild Safaris at 7:00 AM