Within this protected nature reserve, the Thendele Camp has been established – a self-catering accommodation venue administered by the Natal Parks Board, which is now known as Ezemvelo KZN Wildlife. For reservations and advice, contact ourselves on farwild@africasafari.co.za
The original Thendele camp was established on a level section of the rolling hills, below and overlooking the grand massif of the Amphitheater.


Here in Thendele's lower camp, the 2 and 4 bed brick under thatch chalets are older and slightly smaller than those of the Tendele upper camp, which was built on a slightly elevated adjacent plateau.
There is a design difference too. The lower camp 2 bed chalets have a bedroom with a lounging and dining area leading onto a view veranda.


The kitchen, bathroom (with shower over the bath) and separate toilet lead off this room. 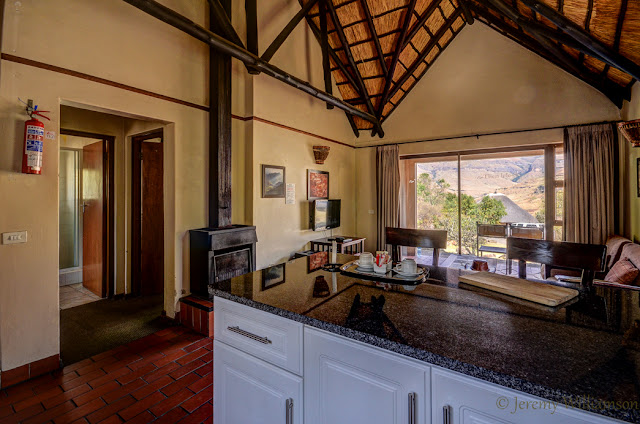 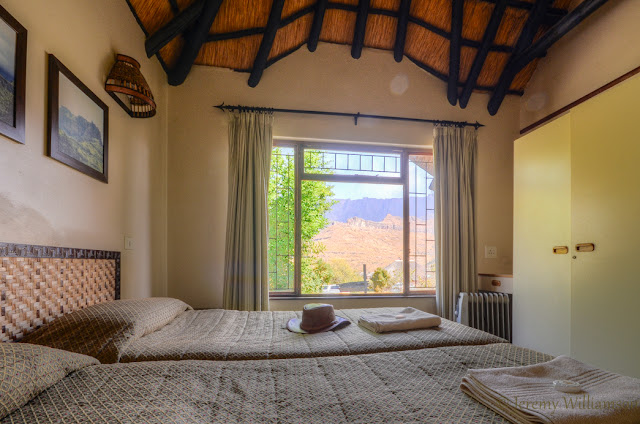 ......as too the bathroom, which has a toilet, bath and a separate shower. 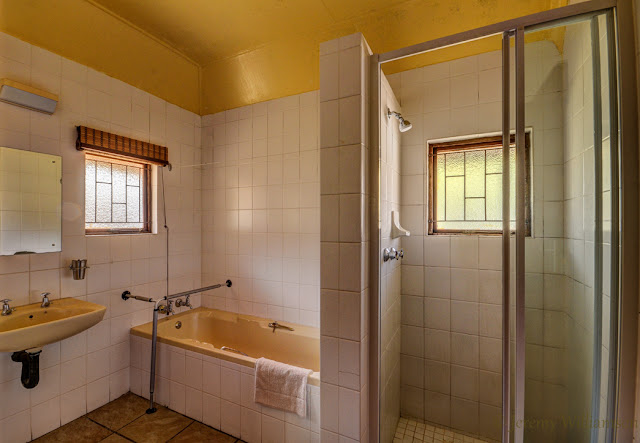 Some of the units are adapted to facilitate guests that require wheel chairs, with access ramps and secure bars at the bath and toilet. Light switches are mounted slightly lower.
The tariff of the 2 and 4 bed chalets at Thendele lower camp are slightly less than those of the upper camp. Guests deem that this must be because of an inferior view. I can assure guests that the view of the Amphitheater is very much the same from all the units.
View of the Amphitheater – Royal Natal Park, from the upper camp.


View of the Amphitheater – Royal Natal Park, from the lower camp.


The cost differential is because of the room sizing and subsequent compromise in some of the appliances – for example the stoves in the Thendele lower camp 2 bed units are counter top 2 plate with small oven units, whilst those in the upper camp are a free standing 4 plate stove and large oven. The bathrooms in the upper camp are larger too with a separate bath and shower.
There is not a great difference between Thendele lower and upper camp 4 bed units. With the lower camp having a separate lounge / dining room from the kitchens.


Upper camp has the lounge / kitchen open plan with some having a separate kitchen.


The kitchens are well equipped with an electric stove as well as a single separate gas burner – this in case of power outages, I see a single candle too, along with matches. Then each has a microwave oven, a kettle and toaster, along with heavy duty cast iron pots and all basic utensils, cutlery and crockery.
In the lounge / bedroom of Thendele lower camp 2 bed units, there is an indoor fireplace.

All the other units have a fireplace in the lounge / dining room, with electric heaters in the bedrooms.

Winters in the mountains can be quite chilly. Thendele Camp is at 1580 meters above sea level. Winter sheets are provided.

All the units have limited DSTV channel TV’s. The windows are burglar guarded, this primarily to inhibit egress to the rooms by the rather belligerent baboons – take care as they have learnt to access your food supplies, by brazenly entering through any open door, even when guests are resident. I had started the outside braai fire (barbecue) – all units have their own private braai stand – and returned to the kitchen to prepare the meal, on looking out to see how the fire was progressing, I witnessed a baboon come and check if there was any food on the unattended blaze, don’t leave food cooking on the braai unattended! 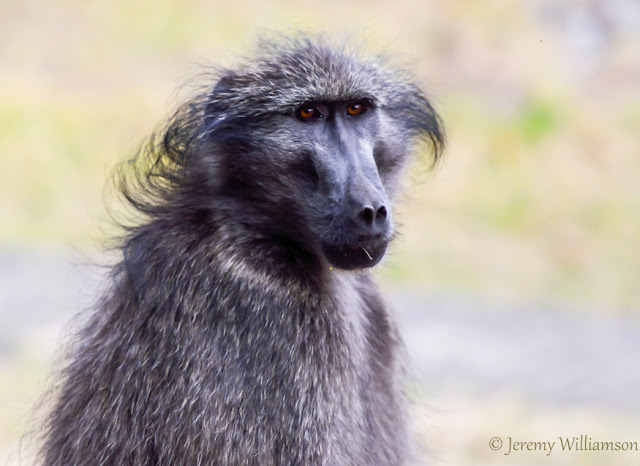 Thendele Camp is not fenced and a number of antelope wander into the grounds along with a plethora of birdlife.

Along with the wildlife, Thendele is noted for its extensive hiking trails through the Royal Natal National Park. The most popular is probably 'The Gorge walk', a 14 km return hike on the bridal paths which is not severe climbing at all. Here guests can walk from the camp and along the upper reaches of the Tugela River. 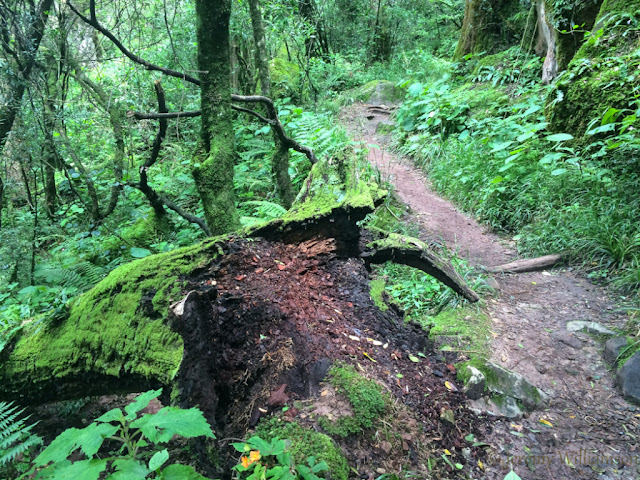 The final upper reaches require crossing the Thugela River a few times, which in summer can be a bit tricky, especially after heavy catchment rains, making it impossible or dangerous. Access to the base of the Tugela Falls – arguably the second highest in the world, starting at 2972 m, requires difficult large boulder traversing and is very awkward in the final stages. A chain ladder has been attached to one particularly steep large rock face, to facilitate accessing the bolder strewn base of the escarpment. Save some energy for the return as the final walk up from the river to Thendele camp is fairly taxing. No last climb if parked at the Gorge parking area next to the river.

Of chain ladders, well for the more adventurous and with some planning, access to the plateau atop the Amphitheatre can be had. This would mean driving from Thendele in the Royal Natal National Park, back to the main road R72 and up the Oliviershoek Pass to Phuthhaditjhaba and on to the Sentinel car park. From here it’s a stiff climb, utilising the two chain ladders to the summit. Take care as the weather can change particularly quickly and it is dangerous being caught up there amongst the clouds. It’s quite a drop. Plan for a very early start and a full day excursion.

Thendele Camp does not have a restaurant, with all the accommodation units in the camp self-catering. There is a day visitor reception and another for overnight guests at the Thendele Camp. Both these facilities have a shop with curios, also supplying basic food stuff, frozen meat, drinks and snacks. Drinks include a selection of beers, wine and spirits. I suggest that one does not rely on these supplies as stock is erratic, with the closest town some 45 odd kms away. During the day, goods made by the local tribes people are offered for sale ar a designated stall within the Park, these are mainly woven items such as baskets, dishes and hats.

Along with the 2 and 4 bed accommodation units there are two, 6 bed cottages. These are beautiful stone clad buildings under thatch.

....a single bathroom with bath and shower combined, separate toilet,...... 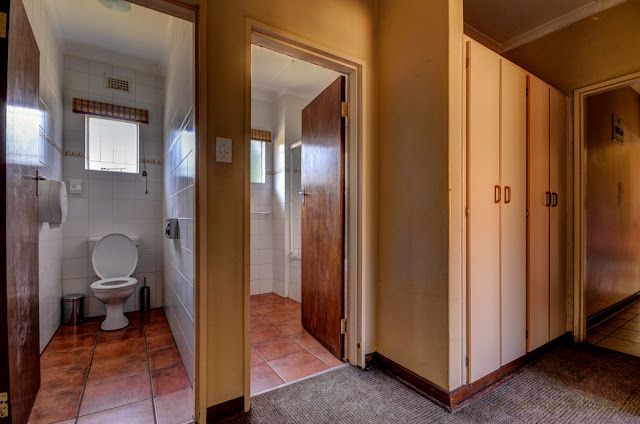 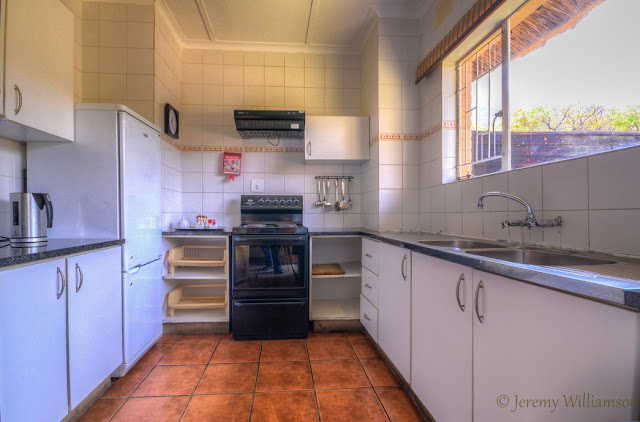 The veranda has a lovely uninterrupted view of the escarpment.

These units have large undercover built in braai units (barbecues) on the verandas. In addition to these two 6 bed cottages, there is the 6 bed Thendele Lodge. This has 3 bedrooms, each with own private bathroom en suite. Built in amongst the rocks, it is a very comfortable more upmarket unit set in its own private grounds. The Thendele Lodge's covered veranda is particularly accommodating with its large undercover barbecue.

Guest accommodation may be taken up from 14h00 on the day of arrival and guests must vacate the rooms by 10h00 on departure. The rooms are serviced daily, beds made and barbecue (braai) cleaned. Dishes are normally not washed. All bed linen, towels and hand soap is supplied along with dish cloths and washing up liquid.


For guests that prefer not to self-cater, a suggestion for meals, would be to visit the nearby Mont-aux-sources Hotel. There are a few other venues where meals may be enjoyed outside of the Royal Natal National Park. Late gate access is allowed, be sure to take your exit permit with you.
At the nearby Rugged Glen Nature Reserve, guests are able to hire horses for rides. The most popular activity however is hiking, followed by fishing in the dams and river and then there are those that visit to enjoy the beauty, the mountain air and the wildlife. Guided hikes to a rock shelter which would have been home to some of the early San peoples that resided in the area, has numerous rock art depicting their thoughts and way of life. The uKhahlamba Drakensberg Park has hundreds of such artworks. 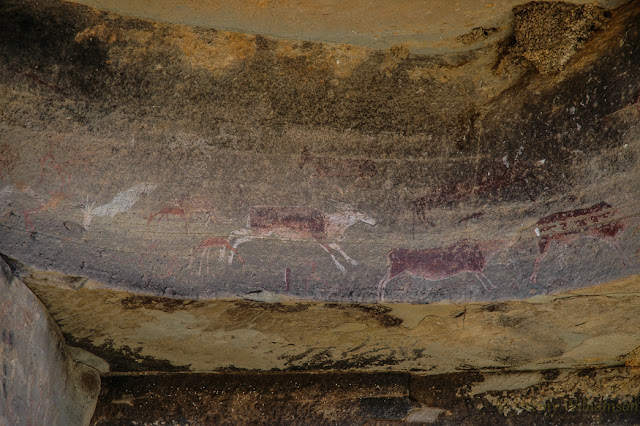 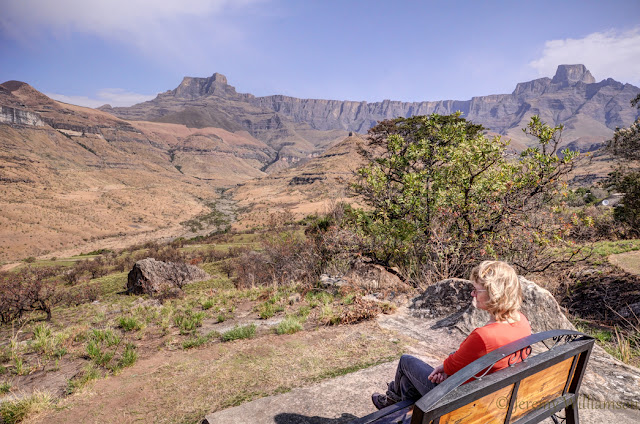 Thendele is a venue one may visit at any time of year. Summers are hot, with frequent magnificent storm cloud build-ups in the afternoons, followed by the odd thunder storm. Can be spectacular!  Winters are fresh and sometimes cold with occasional snow falls. At all times beautiful! 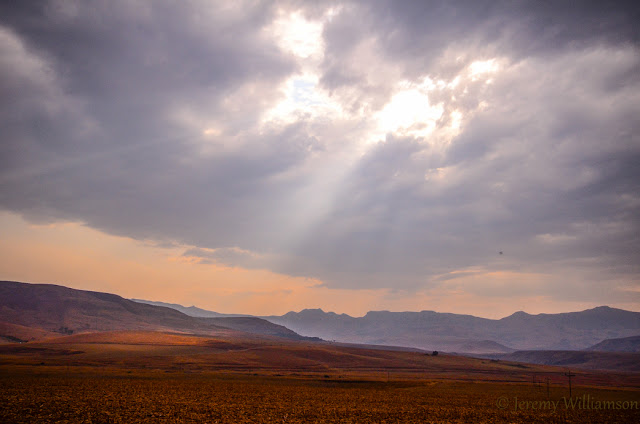 For guest visiting other venues in the area, day visitors are welcome with a pic-nic area and a car park offering easy access to the popular Gorge Walk. For those wishing to camp, there is the Mahai Camp site within the Royal Natal National Park. This is also suitable for caravans. For accommodation reservations in the Drakensberg area contact ourselves on farwild@africasafari.co.za.

Posted by Far and Wild Safaris at 4:34 AM