A long awaited visit to the Thanda Tented Camp in the Thanda Private Game Reserve just north of the World renowned Hluhluwe Imfolozi Park,  just happened to coincide with Lana and my 39th Wedding Anniversary. What a way to be able to spend such a special time, it was the only availability they had this month, such is the popularity of this more affordable Thanda venue, that suited us just fine – Anniversary in the Zululand Bushveld.

With our vehicle parked at the gate, we were collected in an open Land Rover Game Drive vehicle and off to the camp where we were met by our host the camp manager, with hand-towels to freshen up after the 3 hour drive from Durban. Tented camp? Well – Yes, the sleeping accommodation is tented, whilst the main guest facilities are under thatch. 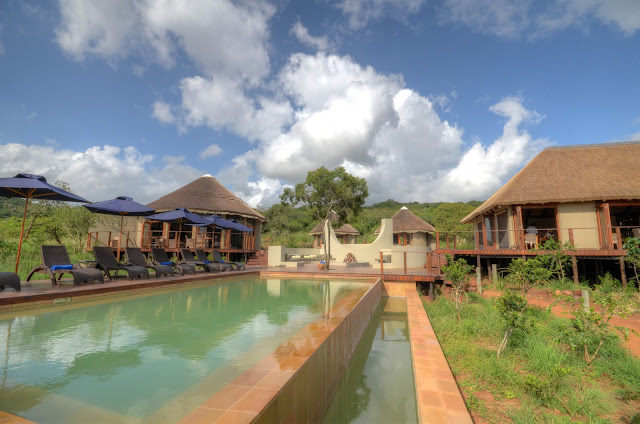 A reception area where guests can arrange for their batteries to be charged – Ah, Yes, there is no real electricity at this camp. Here we get away from some of the mod-cons we take for granted, and do without air-conditioning, fans, hairdryers, kettles in the rooms for tea and the profusion of lights so intrusive in this bush environment. The Lodge provides the hot tea water in the rooms. There is light, primarily in the form of paraffin lanterns, then there is limited electric lighting in some of the public areas, well in the bar and kitchen, and then conveniently in the tents, side lights next to ones bed and a chandelier in the bathroom – good move. I do like the lanterns and candles strategically placed with dinner, quite romantic with the characterful lighting and the fire beyond, in the boma.

The Main public area has a convivial bar, 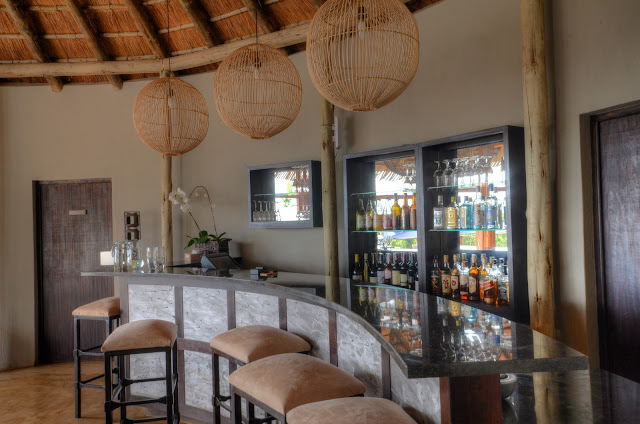 a curio shop , (well priced too) 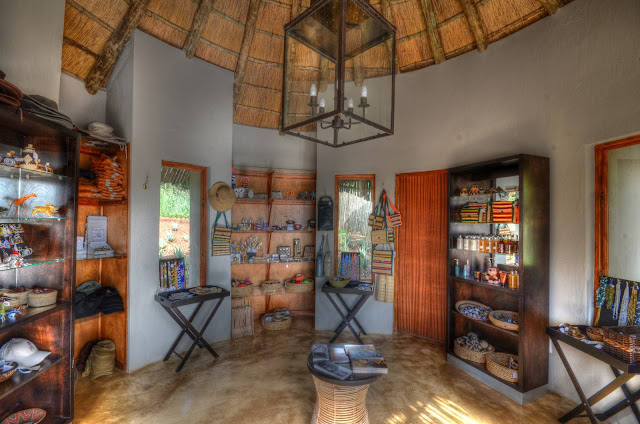 ...and then outdoors has a central lapa or boma area, 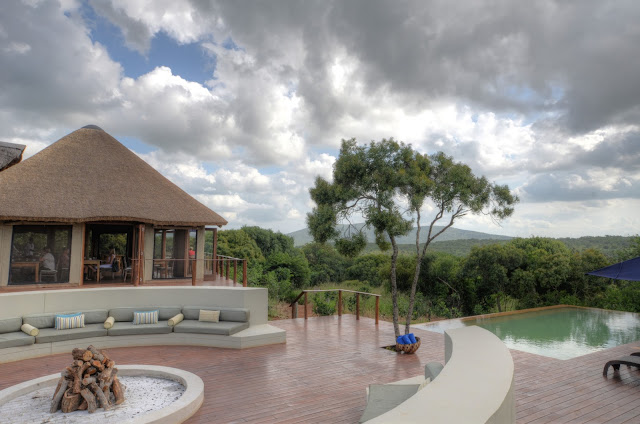 adjoining a seriously large swimming pool. I guess this is needed as an escape for all guests,  from that mid-day heat of Zululand. 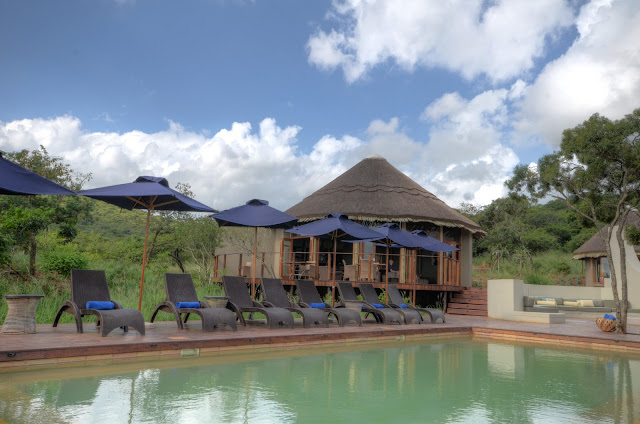 The tents can be rather warm, particularly if there is no breeze. 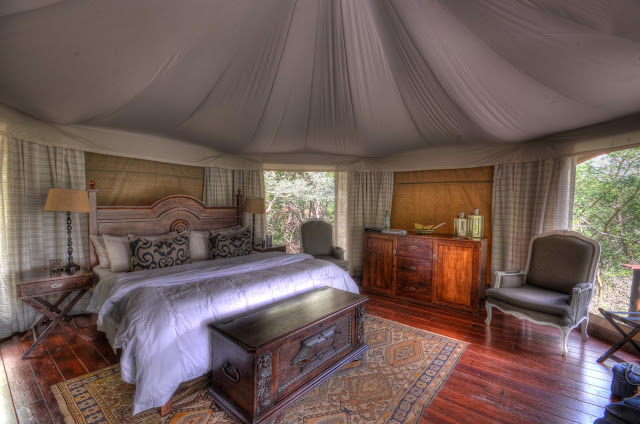 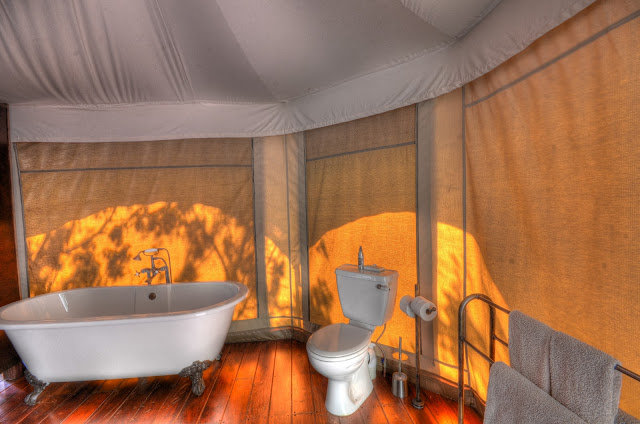 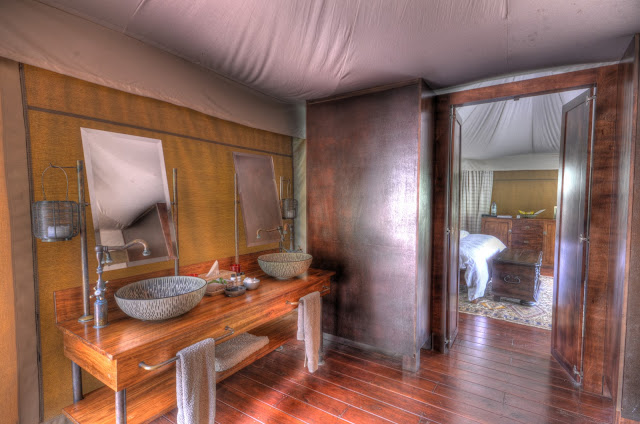 With a 14h00 arrival and high tea at 15h30, comprising of an assortment of tasty savoury, salad and even a delicious cake, we were ready for our game drive departure at 16h30. Iced water for guests to take with them at the reception area, we headed for the Land Rovers. We met our guide Simo and tracker Nonhlanhla, fellow guests and soon out into the bush, after some wildlife. This is the peak of summer, with the grass I guess as high as it gets and the bush as dense as it can be, all making the viewing of the animals a tad more difficult. The joy of visiting a Private Game Reserve at this time of year is that the vehicles are not restricted to the road network and license to approach closer for a clear sighting is such a major boon.
Our guide  found a magnificent bull elephant out there in the bush – we did not manage to get too close to this fella though, was he being a bit belligerent? I would say!  Sensibility prevailed and we let him be. We did get to see a ‘crash”  is it? Of white rhino, five of these magnificent animals together, super sighting!

Then there were giraffe strategically placed  like telephone poles along our way.

Another elephant in the distance and not anywhere near a road, so we settled for some zebra,

... impala and even the odd warthog. Darkness, sundowners in the bush, frogs and nightjars calling and to my delight even some fire-flies, like aircraft in the distance with their tell-tale warning beacons flashing.. We don’t get this in Durban!
Our meal that evening was in the dining area (the weather was not conducive to an outdoor meal as there was the odd rain squall about) the chef came to each table and described his fare. A sweet-corn broth for starters, followed by a pan seared chicken breast on puréed  sweet-potato and accompanying vegetables. This followed by malva pudding and vanilla custard, a bit of a South African flair to the meal with that lot, delicious.
The tent of the mid-day heat had tempered, and with the flaps wide open we pulled back the curtains – it’s terribly private out here in the bush – and let the cool evening breeze in.  Menopausal flushes sorted,  we slumbered to the night sounds and there were some good ‘uns too. Early morning I raptured in the sound of a lion calling, and later, by the time we were dressed and on our way to coffee, rusks and departure, the bush was alive with the cacophony of early-birds.
Our Land Rover, full of cheerful guides and guests, headed off along the maze of roads, to I know not where? but our guides did. They headed to where the southern pride of lion had killed a zebra the previous night. Good move, they were still there. With a bit of patience ,the big male appeared and lay down, 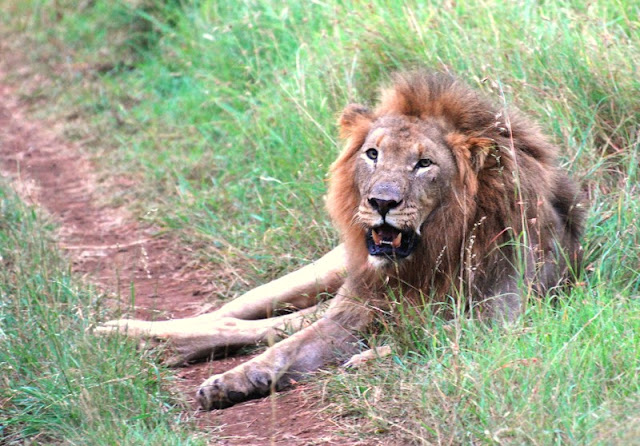 mum followed a while later, bringing her (apparently)  5 month old, two cubs out to pay respects to the old guy and then to have a drink. 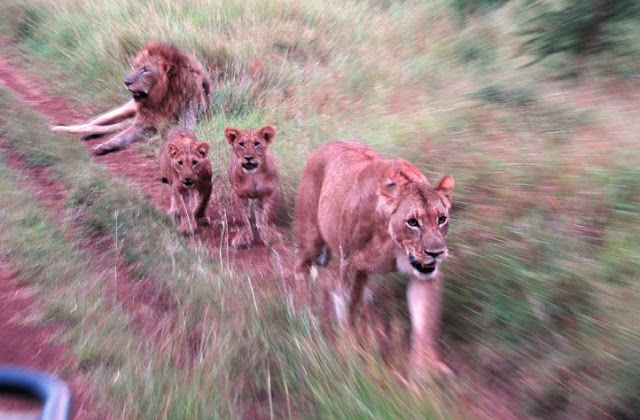 We were in the perfect spot and they all came past us within meters of the vehicle – glancing rather menacingly up at us as they passed. Guests on the vehicle were tense. I acknowledged them paying their respects, and they then headed for the strategically placed wallow, where they drank their fill from the rather muddy water hole. This left the cubs with rather an angelic dirty countenance. 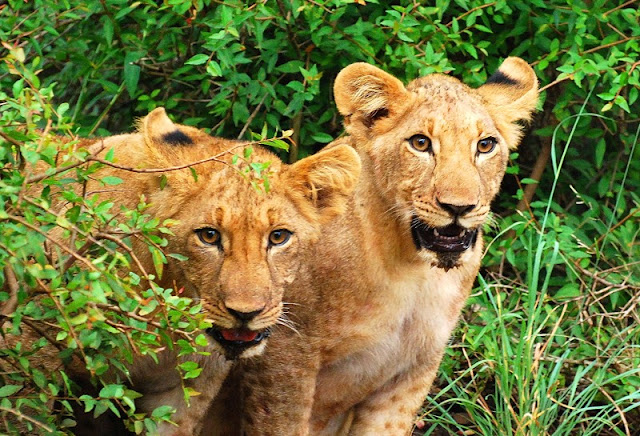 Even the male joined them to slake his thirst. 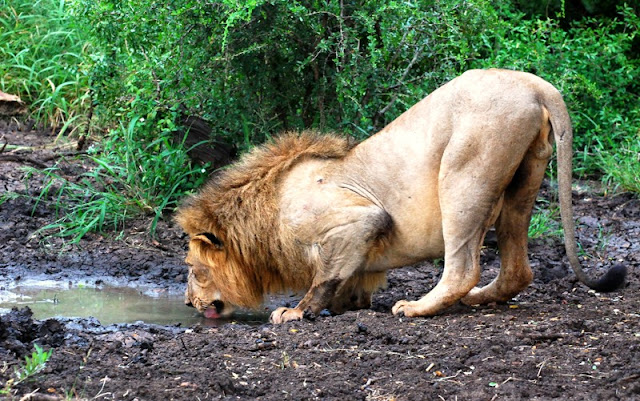 After our morning drive, it was back to camp and to a rather magnificent brunch, well, a late breakfast with all the right choices to break that fast. I have to recommend their very home-made muesli and it’s accompaniment, a delicious rather “maas like” yoghurt. Then, as there was an almost full camp, chaffing dishes, with the traditional “full house” for breakfast was there for all to help themselves.
Thank goodness the day was to be comfortably cool, we had a delightful relaxing time, then the high tea and wild action for the afternoon.

And there was action. Our guests of the previous drives had moved on,  a family of Austrian’s had joined us in their stead. They had spent some time in the Kruger Park area and had unfortunately not seen any of South Africa’s large cats. Well our guides were about to show them.! Yip it was off to find the lion, which we did. They had returned to what was left of the kill. Mum and dad were sleeping off the overindulgence, whilst the two youngsters, although replete, were rather interested in this vehicle load of oglers. 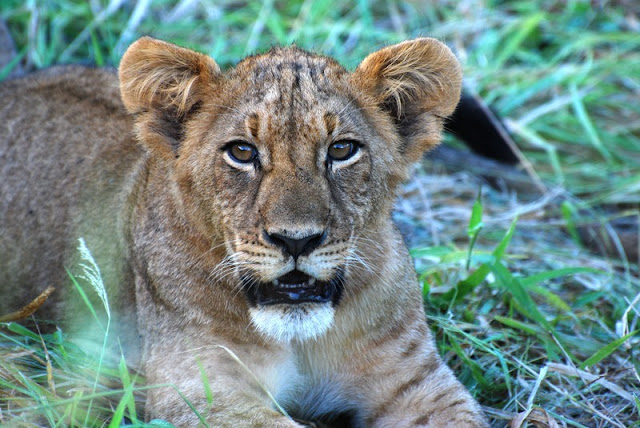 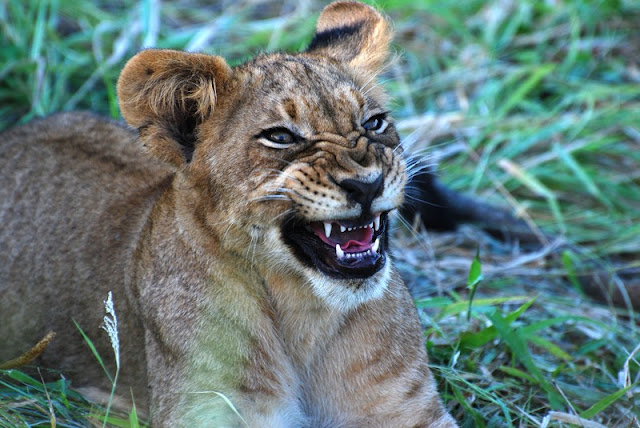 A lovely sighting for us all.
Then off to find more cats. We headed north and YES! found two cheetah, 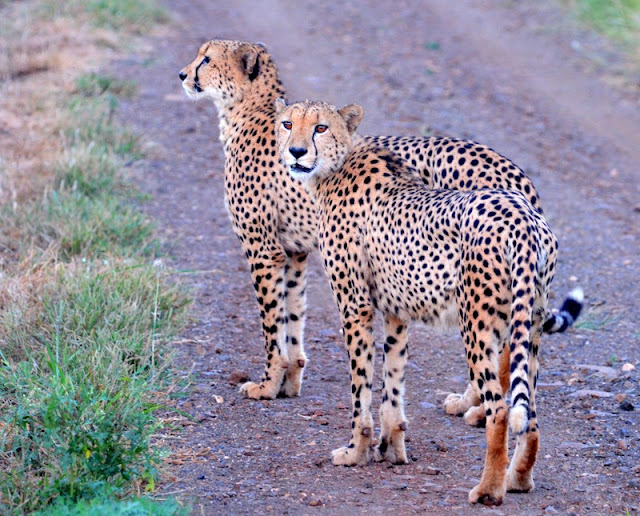 .. our Austrian friends really were thrilled. A short way on and the trees above erupted in the worst of name calling and gesticulating one had ever heard or seen.  A large troop of monkeys had been treed by no less than a large leopard and were voicing their displeasure and angst. Tracks all about and I really admired how our guide unravelled the trail and followed  it, to find that this wily feline was leading us on a bit. We no sooner took the road around the inaccessible watercourse, than he would double back and purposefully plant his tracks over those of our tyres – almost to say bad luck guys ! We never did get to see him,  but it was exciting and he was terribly close by. We could even smell his marking and them tracks were  so fresh , how our tracker / guide combination read them, showing us all the hardly distinct imprints,  was  so much part of the very exciting experience too.
On the way back to camp we had the good fortune to come upon another ‘crash’ of rhino. Well this was more of a ‘crashing,’  three black rhino high-tailing it in parallel to the vehicle and then away from the spotlight and that noisy iron monster.  Such a special sighting that was!

All this excitement  made us slightly late back at camp, where a host of Zulu Warriors awaited us – they were friendly,  even deciding to show off their dancing expertise. As one after the other outdid the previous,  in a high kicking routine, culminating in a climax of unified shields, spears and skins thumping to the rhythm of the drums. That sound certainly stirs me, I can appreciate what it does / did to the Warriors prior to battle or whatever. So to dinner.  Another fine spread. Again in the dining room due to the weather. Tonight a buffet - and here a choice of meats and a lovely selection.  I noticed that a separate meal was brought for a guest who had specific requirements, big smile there.
This morning we returned to where the leopard had been the previous evening, but to no avail. So a bit of general  game viewing before our departure . 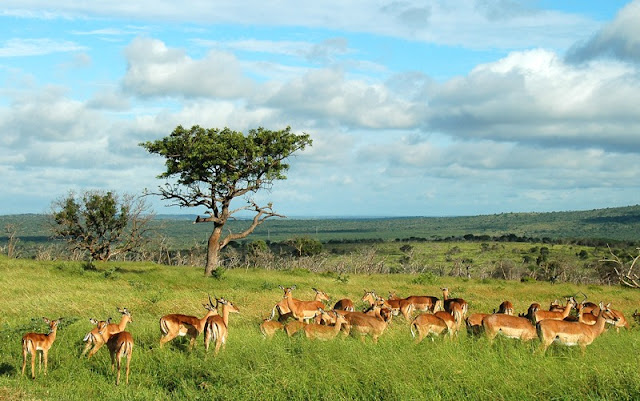 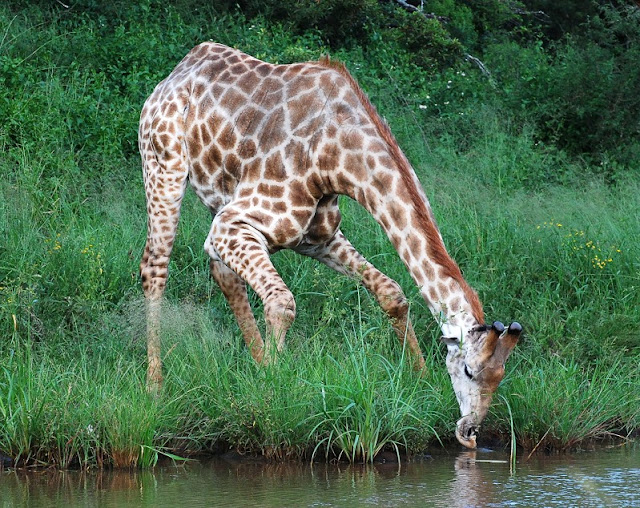 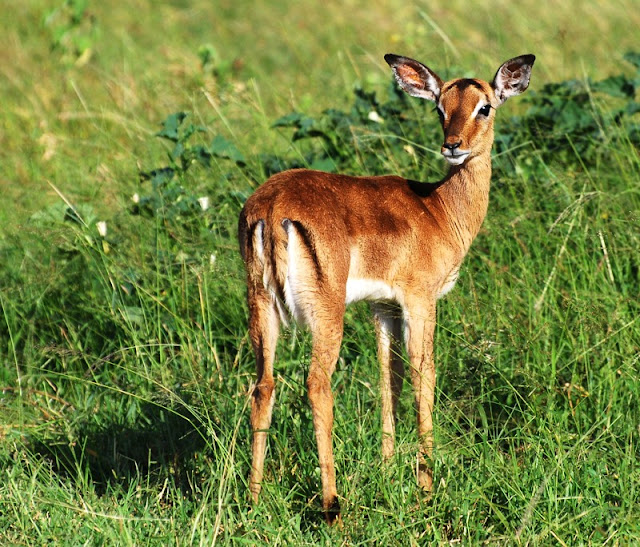 A most pleasant venue with the prestigious Thanda Main Camp and their Royal Private Villa glimpsed at a distance as we passed them by. Now those two venues are another story entirely.
Thanda Private Game Reserve is expanding and there is the possibility of fences being dropped with a neighbour making this reserve  approx 50% larger. Slowly Zululand is returning to its wildlife heritage of old, this is wonderful news and with responsible land owners as we have with Thanda, the  future can only get better for our fauna and flora here.

The tented camp has a rather lovely private 'Honeymoon suite' with expansive sun deck and plunge pool. 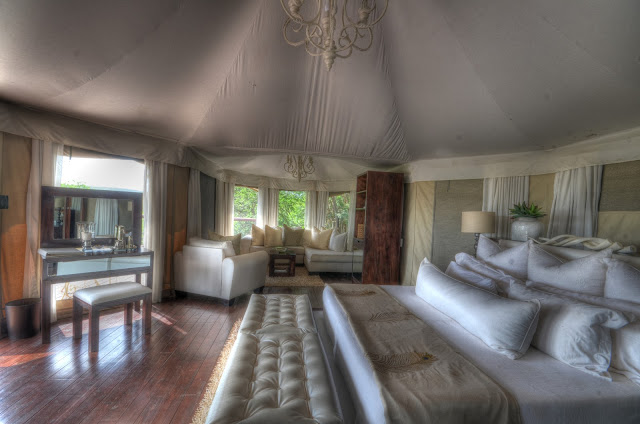 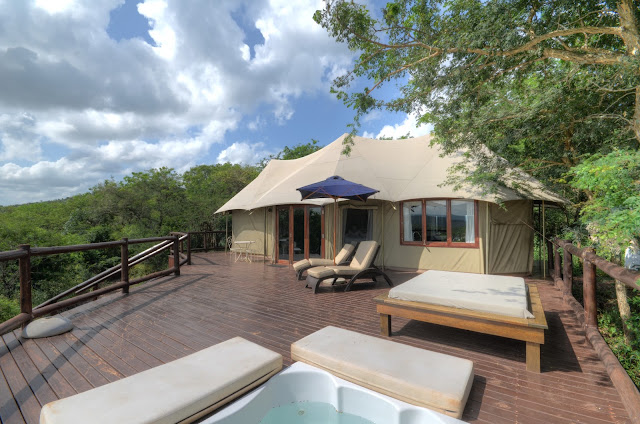 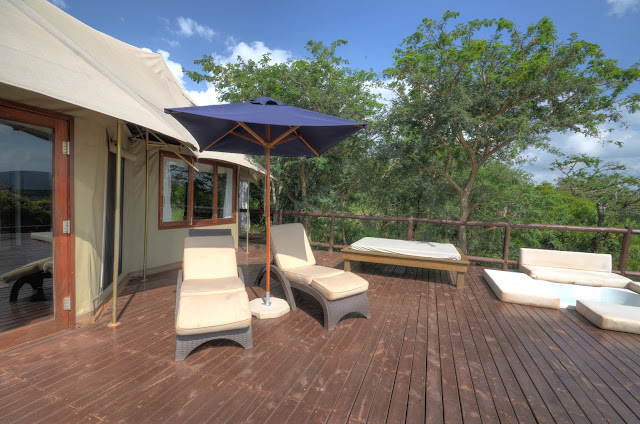 Photographs by Jeremy and Lana Williamson

Posted by Far and Wild Safaris at 4:33 AM