I had recently been corresponding with clients who had requested our standard 2-day tour to one of the public game reserves in KwaZulu-Natal. I had managed to convince them that instead of staying in the public reserve, and for a bit more money, they could stay at the Thanda Private Game Reserve nearby and would in all likelihood enjoy a far better wildlife experience. Boy, am I glad I convinced them to do this – Thanda turned out to be very good. The differences between the public reserves and the private reserves is in the quality of the accommodation, with the private reserves being better, the quality of meals, with the private reserves being better, the quality of service, with the private lodges being better and then more importantly, the quality of the wildlife (or safari) experience, with the private reserves being better. The main reason for this is that in the private reserves you go out with that particular lodges’ guides, who drive in their reserve daily and have a very good idea of where the wildlife is: they have open safari vehicles and are in radio contact with other guides in the reserve, which means if an exciting sighting has been discovered, this is “called in” and if you are close enough, you can respond: the  private reserves have trackers on their vehicles looking for fresh animal tracks, following these tracks and also “spotting” animals: they are able to go off-road for the high profile animals, which means that if you are tracking an animal and it decides to go off-road and into the bush, you follow it. In the public reserves you have to stay on the public roads and are not permitted off-road for any reason, you are bound by gate times – you have to be inside the camp at a certain time and you can only depart camp at a certain time, restrictions that have no bearing in the private reserves: in the public reserves you are sharing your public roads with the general public, some of whom don’t always know the etiquette to be followed with game viewing: in the private reserves it is only that reserves’ vehicles on the roads, making for exclusive game viewing.
The clients agreed to the change and we made our obligatory stop in St. Lucia for a two-hour boat trip, where they saw hippo, crocodiles and numerous water birds. Thereafter we arrived at the Thanda Tented Camp early that afternoon. Here one leaves your car in the secure covered parking at the gate and you are collected for your transfer to the lodge. We were met at the gate by our tracker, Wilson, and he then took us up to the lodge in a safari vehicle. The ride to the lodge took about 20 minutes or so, and en route we saw some impala, warthog, zebra and wildebeest – not a bad start. At the lodge Leana showed us around, informing us of the times for the various activities, meals, do’/don’ts etc. and escorted us to our tents.
The tents have two large single beds, a writing table, coffee station, bottled drinking water, a separate shower, toilet and wash-basin under canvas – all in all very comfortable. The hot water is supplied by a gas burner and although electricity is very limited, it is available – a lamp next to your bed and the lights in the bathroom section are powered by electricity. The rest of the lights are provided by candles and lamps – all very cozy. The outside of the tent has a little deck and two comfortable chairs and the entrance to the tent is through wooden doors – no tent flaps here. All in all, very comfortable. We enjoyed high tea and what a spread it was – a choice of hot and cold drinks, sweet and savoury dishes, salads, etc. 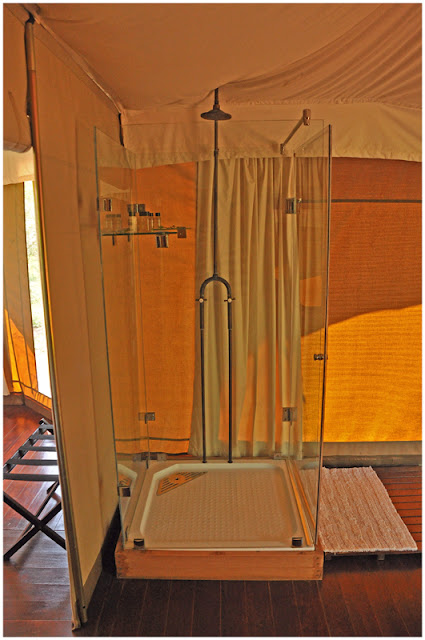 The shower in the bathroom - all under and surrounded by canvas 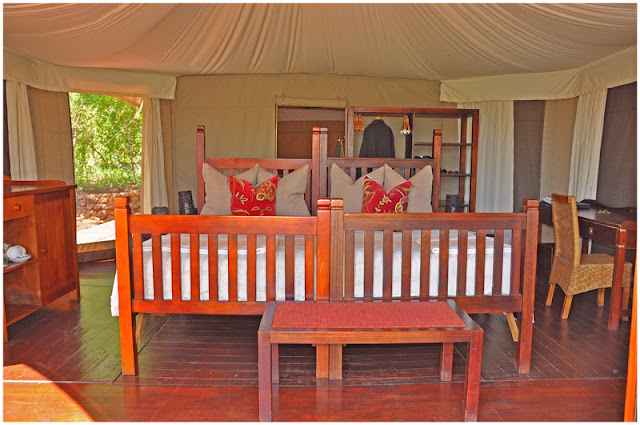 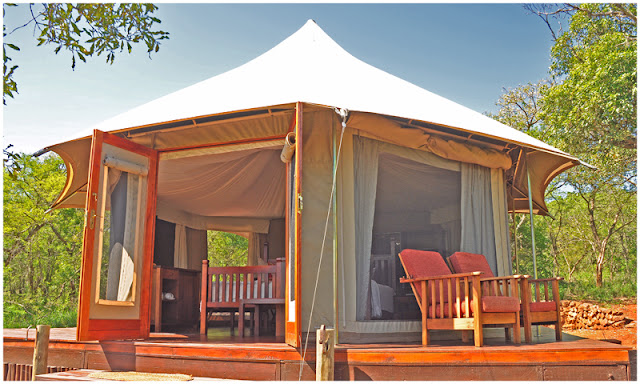 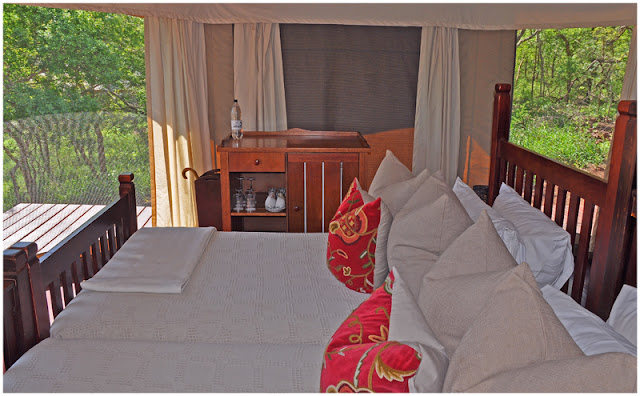 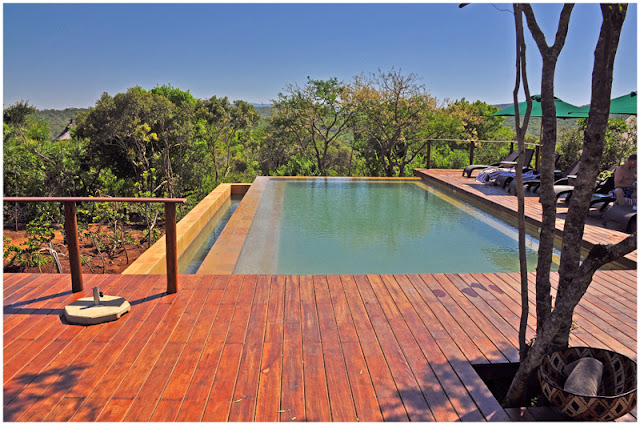 The pool and deck area 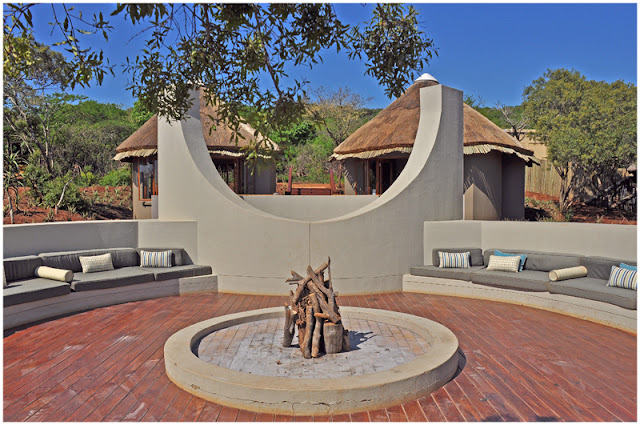 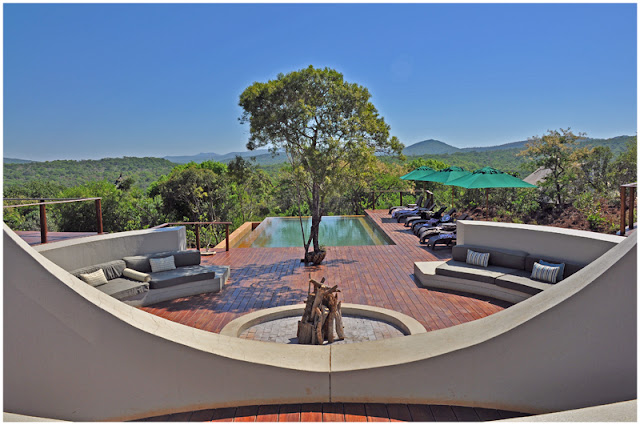 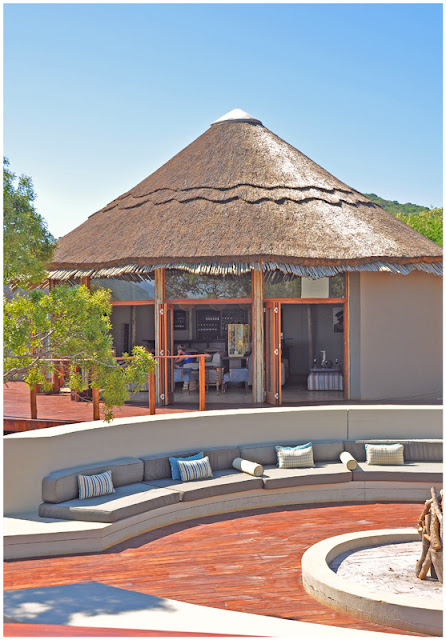 Part of the deck and the bar area
After high tea we were introduced to our guide, Ettienne and we set off on our afternoon/evening drive. On this drive we saw plenty of giraffe, zebra, wildebeest, impala and warthog and things were looking promising. 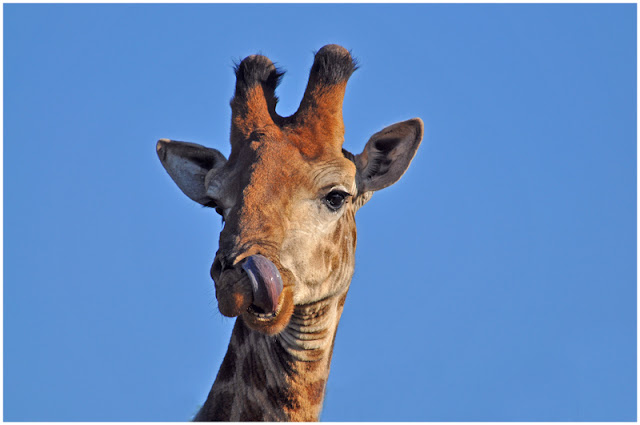 A long tongue can be a benefit sometimes 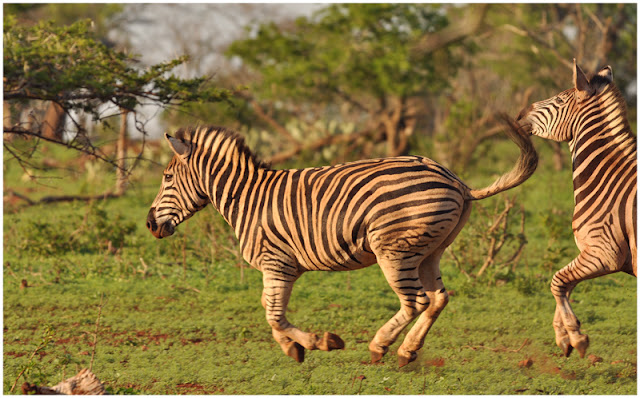 Ettienne knew about some lions in the area as he had seen them earlier that morning so we went off looking for them. After a little bit of off-road driving they were spotted in the distance and we got fairly close to them. These were two adult lionesses and four cubs and we were able to watch them for quite some time. Unfortunately for me, the light was fading fast and they were in mostly shadow, so this made photography a bit difficult, but I did manage to get some photos of them. The two adults were doing what lionesses do best – sleep, with hardly any movement from them. It seemed as if the cubs had also recently nursed, so they were pretty quiet (in fact, one of them hardly moved at all during the entire time that we were there) and when they did play, it was all a bit lethargic. After about 30 minutes or so we let them be and moved off into the fading light. 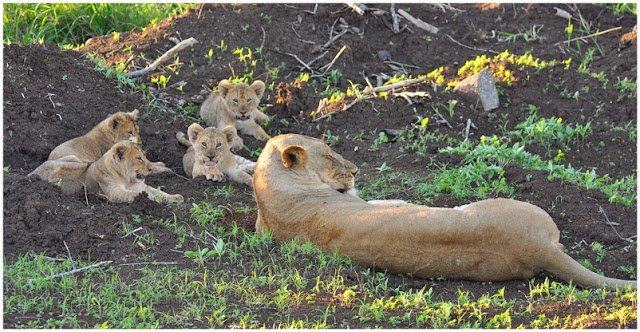 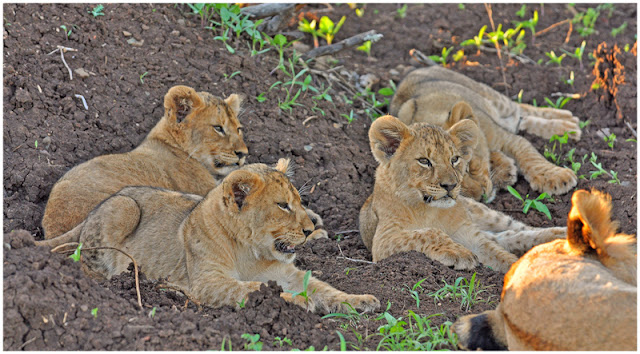 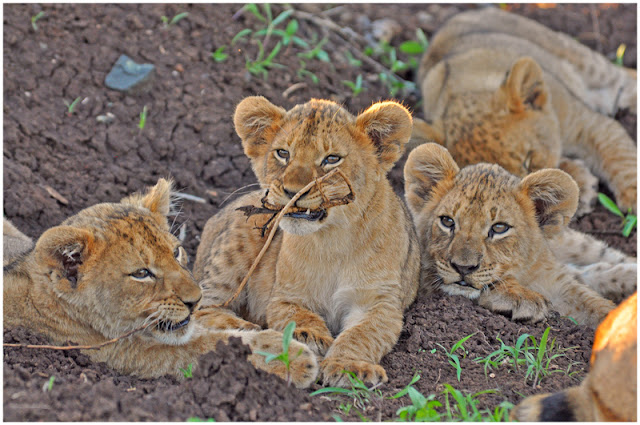 Not long after this we came upon a bull rhino walking along one of the roads, and about 200 metres further on near a waterhole we also saw four rhinos together – we now had two choices, the lone bull or the group of four. Needless to say, we decided on the group of four (who were in any event later joined by the lone bull). By this time the light was poor, and as we were watching the rhino, we saw some movement in the fast-fading light – lions! This was a group of four lions and they passed quite close to the rhino (and to us) and in fact, two of them stopped quite close to our vehicle for a drink before moving on. I managed to take a photo or two, but the light was by now almost nonexistent – the ISO was pushed right up, but even then, handholding a 400mm lens still is not ideal and I got some shots that identify the animals as lions, but that’s about all. We then left the lions and the rhino to their own devices and continued the drive. 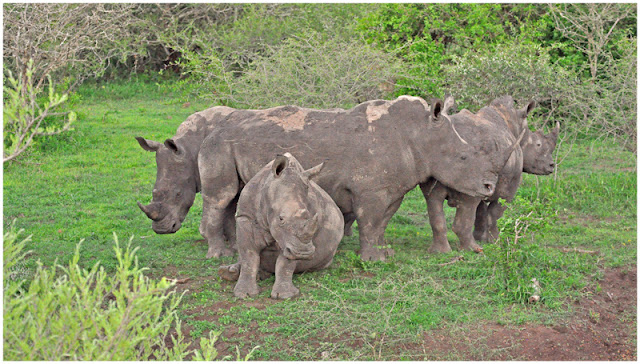 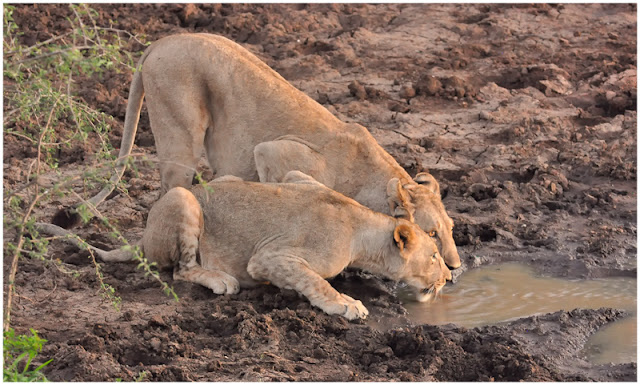 I think everyone was mulling over the awesome sightings up to this point – lots of general game, two different lion prides, five rhino, and maybe we were all deep in our own thoughts when we chanced upon a leopard. This magnificent cat had been sitting on the side of the road in the dark when we came upon it. However, it swiftly moved off and under a very thick bush. With some deft maneuvering from Ettienne and the spotlight from Wilson we were able to see the leopard crouched in the bush. Shortly thereafter it swiftly crossed the road behind us and disappeared into the dark on the other side of the road, but everyone on the vehicle managed to get a good view of the animal, even though photos were impossible.
The next thing that happened was that we came upon a clearing where there were quite a lot of lamplights – they had set up a bush dinner for us. Tables were set, fires were burning, cooks and waiters were in attendance and a group of Zulu dancers arrived to entertain – they were very energetic and put on quite a performance. After they had departed dinner commenced - soups, salads, vegetables, starches, four different types of meat, desserts – all this was available in the bush and under the stars – and the weather was magnificent – all is fine in Africa. 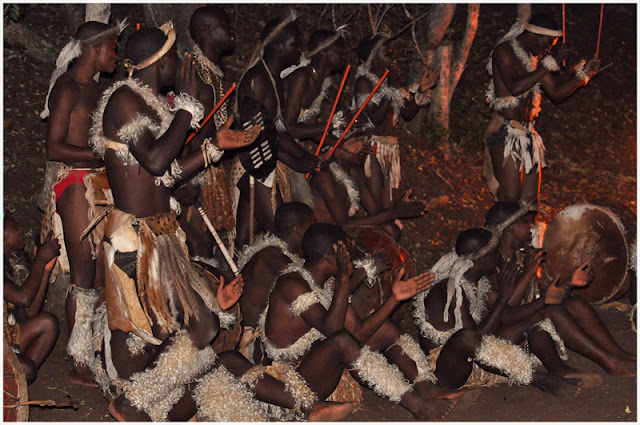 On the way back to the lodge Etteinne suddenly stopped the vehicle – he had smelt something and asked if we too had smelt anything. None of us had smelt a thing (maybe the few glasses of wine had something to do with this). However, he backed up and we smelt it – buttered popcorn! Now this is what I like about game drives – I have been on hundreds of them, and I am sure that on every single one of them I had learnt something new (and forgot most of it as well for some reason or other, maybe age?). What I learned on this night is that a leopard’s urine smells like buttered popcorn – no reason, it just does. A leopard had obviously been there a short while before we arrived and had urinated on some bushes close to the road, leaving its scent behind and marking its territory.

The following morning we set out early and then again saw the usual general game and not long after we had been out we came upon a large herd of buffalo. Now for many people, buffalo may seem like a boring animal and this may be because it looks something like domestic livestock. You couldn’t be more wrong – buffalo are not one of the “big 5” for no reason, they are dangerous. However, if you are safely inside a vehicle you should have very few problems with them and I must say, I quite enjoy sitting amongst a herd of buffalo just observing their relaxed nature and quizzical expressions – this would of course all change in an instant if one was to get out of the vehicle or stand up in it. They would react very quickly, and dare I say it, dangerously. 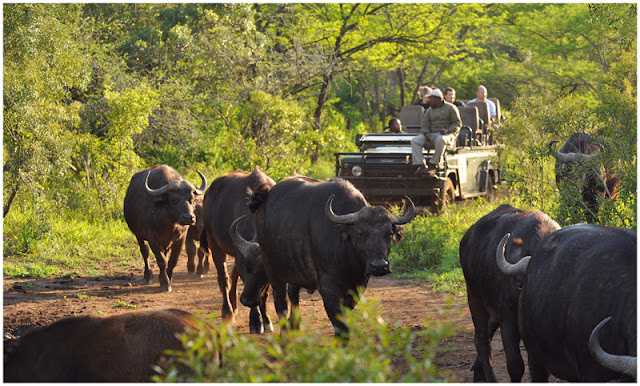 Another vehicle in amongst the buffalo 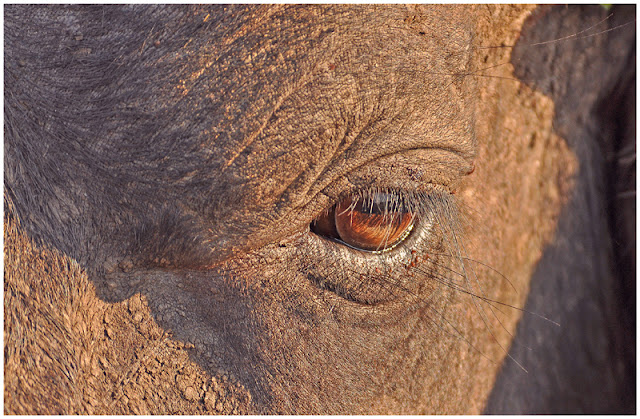 and me close enough to photograph just the eye 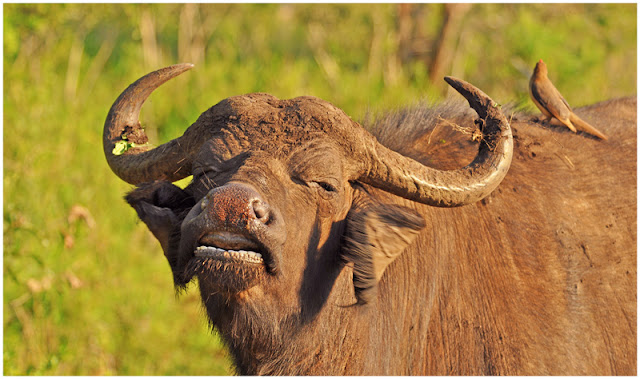 We left the buffalo in peace and went in search of some elephant which we were lucky to find. Some more off-road driving and we managed to get fairly close to a youngish bull. This group was widely spread out, and the others could be seen in the thick bush feeding to their hearts’ content.  Every now and again you would hear the breaking of branches, see the movement of the trees and the distant animals occasionally showed themselves. 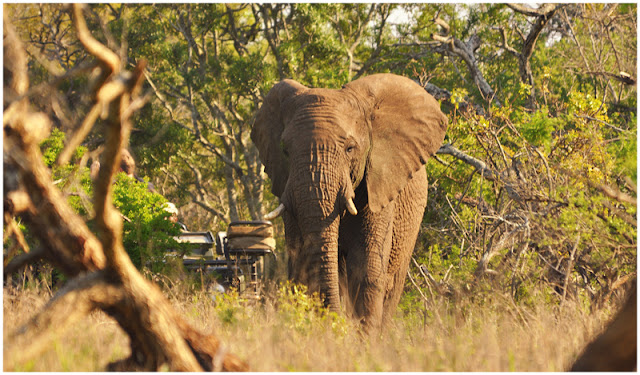 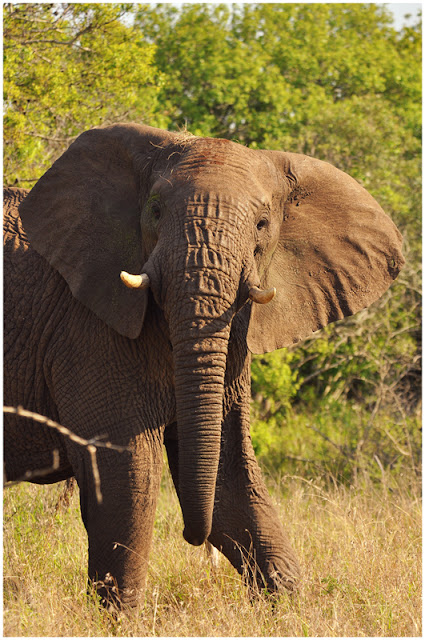 En route back to the camp we came upon some impala, and for old time’s sake we stopped here for a last look. Luckily we did – two of the rams had gotten involved in an altercation and the loser was being chased by the victor, so I managed to get a quick three shots of them. 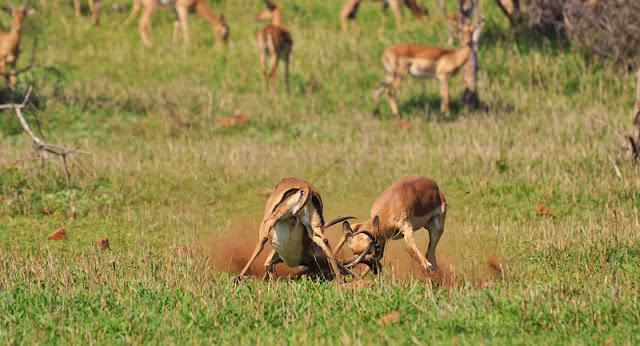 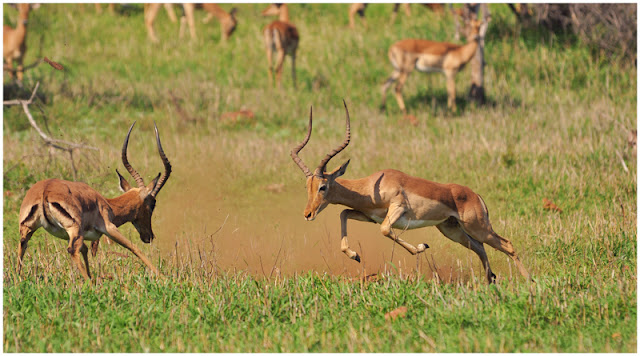 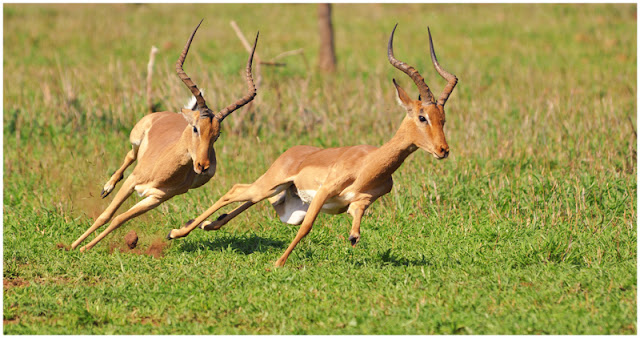 Then it was back to the camp for a leisurely and sumptuous brunch, followed by our reluctant departure. This was such an awesome experience for only two drives, and I have little doubt in my mind that the public park, although I have had some good sightings there in the past, could not have delivered the same quality of experience that we had enjoyed at Thanda.

Posted by Keith Marallich at 4:29 AM