A Tour Through Zululand

I was about to embark on a 6-day tour through Zululand with two clients, one of whom was a keen birder, so I was looking forward to this, even though the middle of winter is not a good time for birding. My itinerary was to take me to St. Lucia for one night, the Hluhluwe uMfolozi Park for two nights, Mkuze for one night and then to the Ithala Game Reserve for the last night. My bags were packed, the camera was ready and I was off.

We arrived in St. Lucia and headed to the mouth of the lake for some birding before we checked into Lidiko Lodge. Here we saw hippos, crocs, both Giant and Pied kingfishers, herons, African fish eagle and also, surprisingly, the near-threatened Open-billed Stork and an Osprey – the Ospreys are according to “the book” not meant to be here during this time, but some may overwinter in South Africa. This one obviously did not read the book and decided to stay for the winter – St. Lucia is in any event imminently better in winter than Scotland! That afternoon we went on a drive into the Eastern Shores and to the Mfazana Hide – my first visit to this hide. I must say, I was pretty impressed, this is a big hide, with a well laid out path to reach it, clean toilets and four viewing areas at the hide itself, all looking out over a pan. However (and there’s always a “however”), don’t go there in the afternoon. The sun is directly in front of you (the hide faces west) and not only does the sun inhibit your photography, it also reflects off the bright water, making general viewing difficult to impossible. There were some Malachite Kingfishers, Squacco Heron, both Great and Little Egrets and then some crocodiles. I did take some photos here, but… 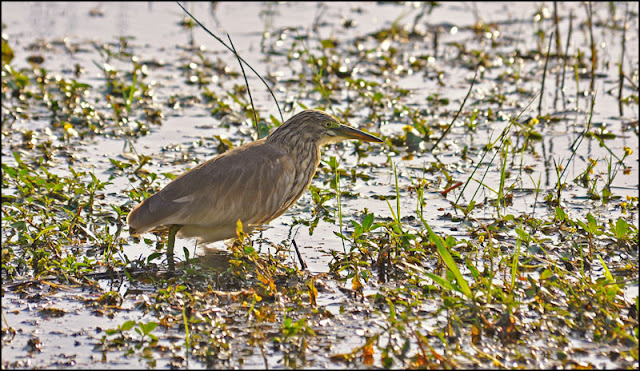 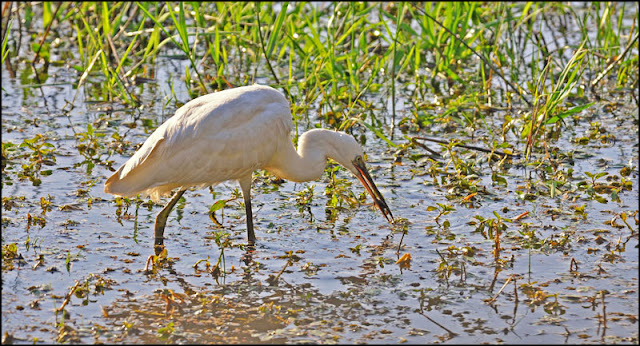 The next morning we went on the newest concession boat for a two-hour cruise on the lake – great! We departed forty-five minutes before everyone else (they mostly depart at 10:00) and there were only the three of us on the boat, together with the guide. This is a much smaller boat than the others, with a low draught, getting one close to the shore – which we did, looking for Fiddler Crabs and mud-skippers. We also saw plenty of hippos, some crocodiles and plenty of birds, too many to mention here. A bird that stood out was a Palm-nut Vulture which flew overhead and the flamingoes from last time were still present in the estuary. Quite a few of the near-threatened Caspian Terns were also seen. One bird that did play its part was the Giant Kingfisher – this bird stayed put as we got closer and closer to it, so close that I could almost have reached out and touched it! 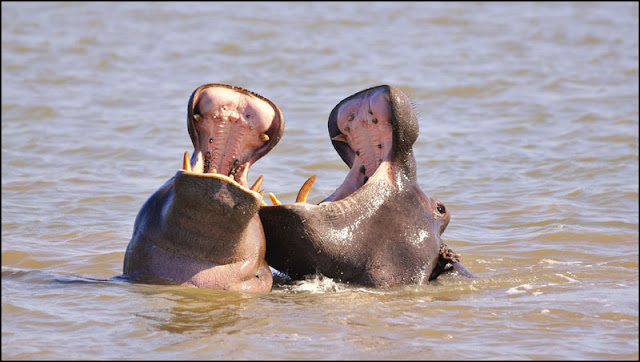 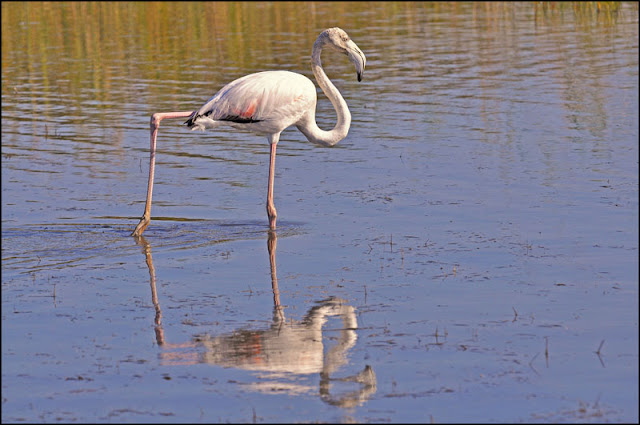 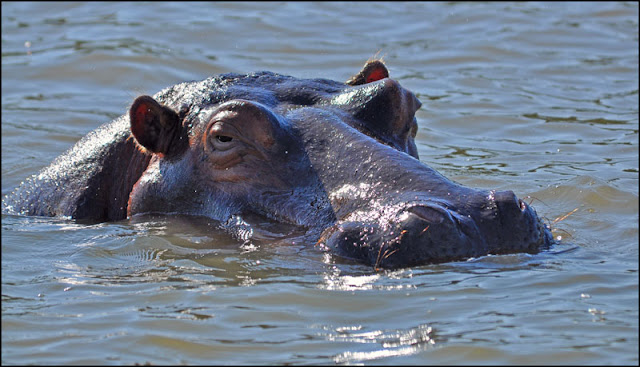 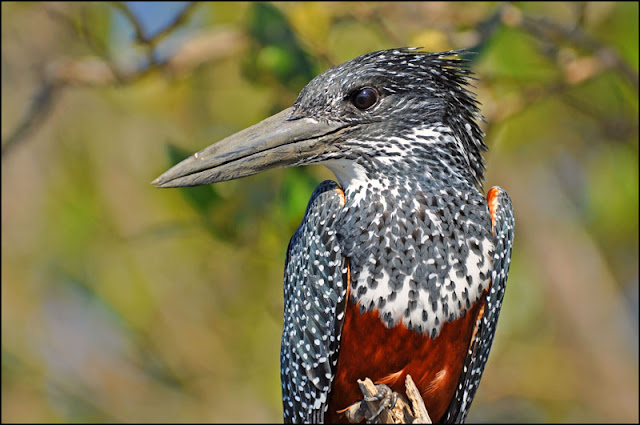 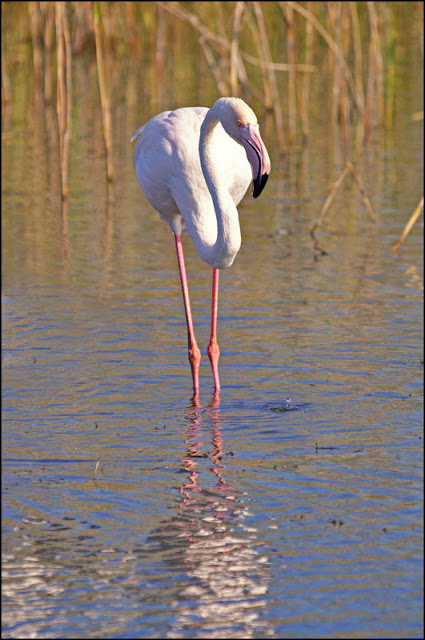 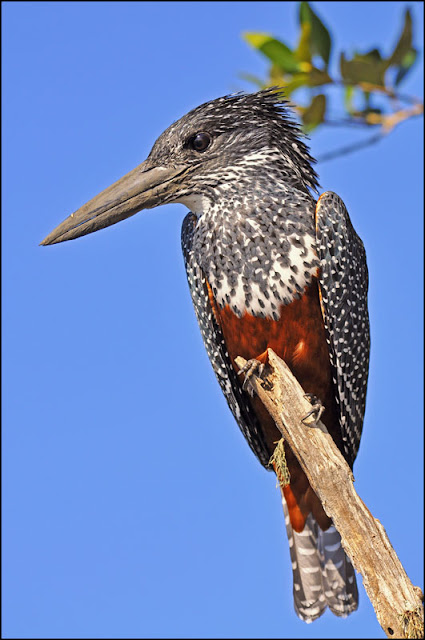 That afternoon we headed into the Hluhluwe uMfolozi Park and to Hilltop Camp, seeing very little en route – buffalo, giraffe and zebra and that’s about it. That evening the clients went on a sunset drive for three hours and saw white rhino, buffalo, giraffe and some Spotted Thick-knee (I kid you not – this is its new name!) and some nightjars. No big cats, hyena or much else was seen on this drive. The following morning we returned from a three hour drive before breakfast having seen some impala, rhino and buffalo and after breakfast, another three hours that produced more buffalo, white rhino and nyala – but mostly nothing. We did do some birding at the Maphumulo Picnic Site, which was not too bad, with quite a few nyala and some baboons seen on the far bank of the river. The drive in the afternoon again produced some general game – we had yet to see any of the cats or even elephant, which are normally plentiful in this park. My photographs for this day were of the Samango monkeys (again) taken in the Hilltop Camp! 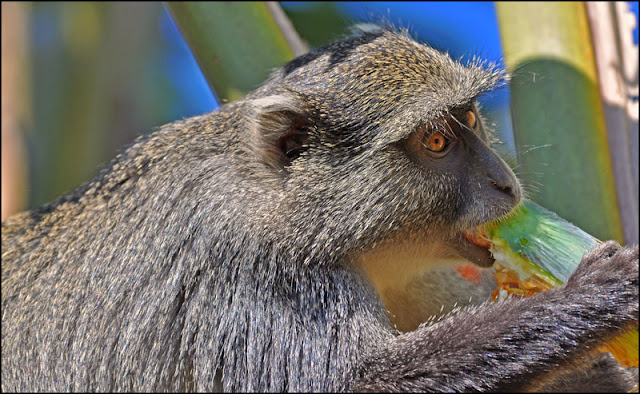 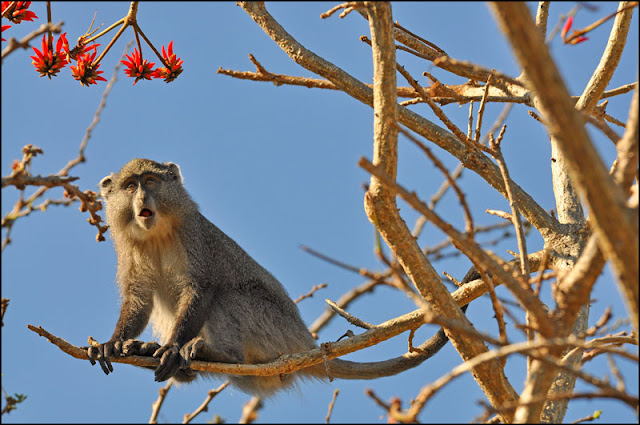 The following morning early I headed out to Umfolozi section in the south of the park – some people claim that game viewing here is the best – but this trip did not convince me that this is true. En route we did see two elephant and later that afternoon, again two elephant in another area, on the way back. In between the elephants, the normal buffalo, nyala, rhino, impala, zebra and wildebeest were seen. What was quite interesting at the Bhejane Hide, where we had also stopped, was that there was a buffalo drinking, and flanked on either side of him were groups of zebra, all making sure that they gave the buffalo his space, as befitting an animal much larger than them.

In the late afternoon, en route to exit the park, and about ten minutes before our exit at the Memorial Gate there was some back-up of traffic. Scanning the distance with my binoculars I detected some movement, eventually being able to point out four lions – two lionesses and one older and one younger male. I can honestly say that in my entire guiding career, this is the furthest that I have ever sat and watched lions! I had to - we were ten minutes from the exit and had seen hardly anything in about eighteen to twenty hours of driving in this reserve and these were our first cats. These animals were little specks in my binoculars – with the naked eye they would have been almost impossible to see.

The following morning we headed out early from the Ghost Mountain Inn in Mkuze with our picnic breakfasts to the nearby Mkuze Game Reserve and the newly refurbished Kumasinga Hide, my favourite spot in the province! Imagine my disappointment upon arriving at the hide to find that some enterprising professional wildlife photographer had about twenty or so people at the hide, teaching them how to take photographs. In between their talking, (words such as lighting, catch-lights, depth-of-field, shutter speeds, angles, f-stops and bus stops were words frequently used – okay, not bus stops, but some of them did not seem to know the difference between a f-stop and a bus stop), their laughing, dropping tripods, dropping coffee mugs and flasks and in one instance, a lens, it was a wonder that any animals came to the hide. But come they did…wildebeest, nyala, impala, warthogs, zebra and the odd birds. 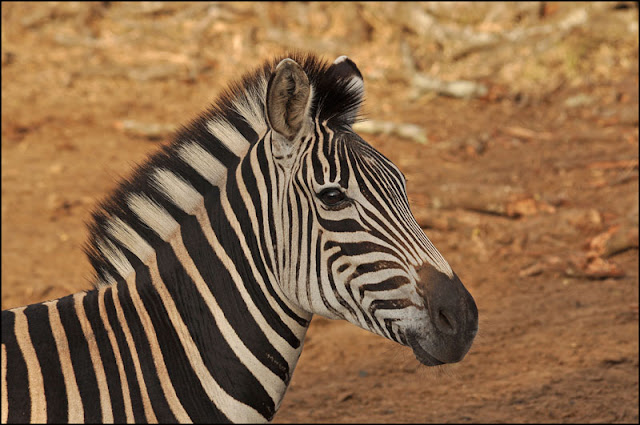 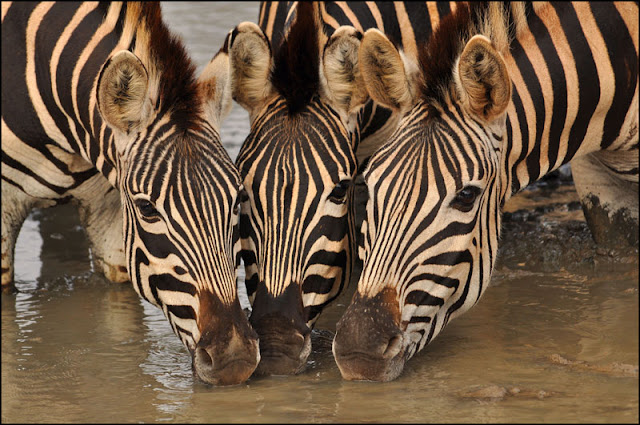 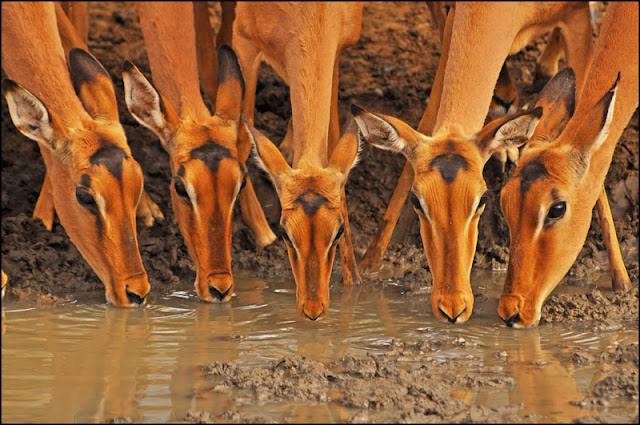 Man, photography was difficult – I had found a good seat and stayed put, but the learner photographers (from all ages between 20-odd and probably 70-odd) all moved about, clomping noisily on the wooden floor in their designer boots, dragging camera bags, tripods, pillows and the dregs of their breakfasts behind them. So, when the animals arrived in their various groups at various stages, there was the inevitable mad scramble by these people to get their photos. I had them leaning over me, breathing down my neck, bumping me, crowding me etc.etc. One would have thought that a “professional” photographer – if this is what he was – would have briefed them before-hand that one should keep noise levels to a minimum at a hide in a game reserve that is visited by wild animals. I did hear one of the say that he was hoping for a black rhino to make an appearance – I fear with all this noise this would not have happened. We stayed there for probably an hour and a half or so and then moved on – the light was poor (it was mostly overcast) and the crowd was getting noisier and noisier. We did stop at the main camp for a bit of birding and I was lucky to see (and photograph) a Yellow-spotted Nictator. 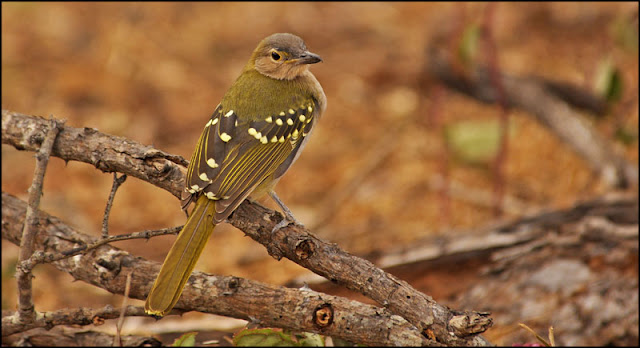 We arrived at Ithala in the early afternoon and the clients went on a sundowner drive where they saw wildebeest, duiker, a Spotted Eagle Owl and zebra. They did follow up on elephant but could not find them, only the fresh spoor - broken branches and fresh dung. The next morning we drove the various loop roads into the open grasslands, but saw very little. In the late morning, making our way to the exit gate, one of the clients spotted two Black-backed Jackals in the distance. Their behavior was quite strange – it was late morning and they were still up and about. More than that though, the one jackal kept up a constant yapping and staring into a thick bushy area. After spending about fifteen minutes here I saw some movement in the thick bush, and then a leopard made its appearance! This is what had excited the jackals (and what excited us) but again, as with the lions a few days previously, this was very far away (and also only about ten minutes or so before we exited the park). Unfortunately this was way too far for a photo, but the leopard moved out into the open and crossed over a small hill, to disappear from view. The light was stunning, the leopard was out in the open and the background (a knoll of round boulders) would have made a perfect photo, if the animal had been a lot closer!

I must say that I was rather disappointed, after having really looked forward to this tour. My experience in the Hluhluwe uMfolozi Park has mostly been good, with some good sightings, but then again, there have also been times when game viewing was desperate – this was one of those times. The hide at Mkuze could have been great (the sun did give some nice light from time to time) but those photography students… Ithala, if not for the leopard, would have been very disappointing, especially in view of the fact that it is quite a long drive from here back to Durban. Oh well, next time.

Posted by Keith Marallich at 5:46 AM