The Aussie Invasion to the Hluhluwe uMfolozi Park - Keith Marallich


During the past month I was fortunate to have two separate Australian groups with me on tour, one for three days and the other for four days. Both these tours were to the Hluhluwe uMfolozi Park, with the last tour also including a one-night stay in St. Lucia. The first group had come to S.A. to take part in the Comrades Marathon and I collected them from the hotel in Durban the very next day. Needless to say, after a little run of 89 kilometres (for my American friends – that’s fifty-five and a half miles!) they weren’t too energetic, limping and dragging their tired bodies onto the vehicle. One chap even operated on himself in Hilltop Camp by exorcising the nail on one of his big toes – I tell you, these Aussies are tough!

With the first group we arrived at the Nyalazi Gate entrance into the park and what do we see? A group of about thirty teenagers who had seen a lone elephant bull about forty metres from the gate, and they were now trying their best to attract this animal’s attention, shouting loudly and waving their arms about, hoping to get him to come closer. Only teenagers would do something like this. Before I had even alighted from my vehicle to possibly politely ask them to desist from their risky behavior, another guide in an open vehicle had stopped and in no uncertain terms told them to return to their two mini coaches, remonstrating with their guides – if that is what they were, for they were both laying down next to their vehicles, taking a nap! Fortunately the elephant did not react, although it would have been interesting to see a five-ton enraged bull elephant bear down on thirty noisy teenagers, and what their reaction would have been – an elephant can cover forty metres in almost no time. Anyway, we were fortunate that nothing bad happened, as we would then, in all likelihood, have blamed the elephant, calling it a “rogue” or some such nonsense.

On their night drive and during the next few days, many more elephants were seen, as well as rhino’s, plenty of giraffe, buffalo and general game. At one stage I remember telling them that giraffe are known to sometimes chew bones and I could see the look of skepticism on their faces, but I stuck to my story. I had hardly finished telling them this when we came upon some giraffe, and what was the male doing? Yep, chewing on a bone. Vindication! One animal that I did see, and have never seen before in this park (and come to think of it, have never seen since) was a Rock Hyrax – a common Dassie! This was early in the morning and it was on the road towards the Memorial Gate, but did get out of the way when we approached. In the Ithala Game Reserve, about two and a bit hours north and inland from the Hluhluwe uMfolozi Park, there are literally thousands of these endearing little animals, so I know them well, but have never seen them here before.

One evening as darkness was falling we were returning to camp, just before the gates closed when we saw a tiny white rhino stuck in some thick mud at the Zincakeni Dam, with a frantic mother in attendance. Her behavior was what alerted us the plight of the little one and this chap was definitely stuck – the bank on his/her side was too steep to scale (it had obviously fallen down the bank) and the other side had quite a bit of water to contend with. Rhinos cannot really assist their young as elephants are sometimes able to do, and this chap was definitely not going to get out on his own. The best that I could do was to return to camp and get the camp manager to alert the section ranger to this. By early the next morning both the calf and mother were nowhere to be seen – well done to the authorities for intervening in the plight of this now under threat species.

On the boat trip on Lake St. Lucia there was the usual large numbers of hippo, some crocodiles and plenty of water birds. Among them were pelicans, squacco,  green-backed and goliath herons, pygmy geese, fish eagles and surprisingly, four greater flamingoes in the estuary. 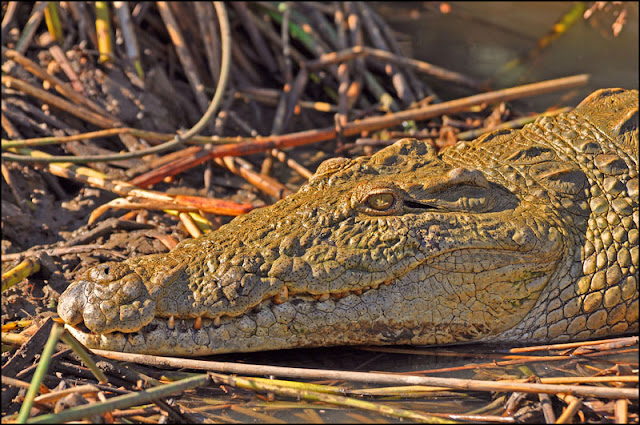 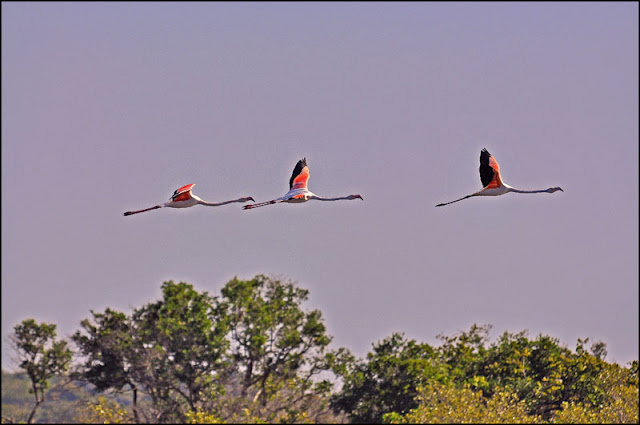 As with most people, these guests too desperately wanted to see predators, but unfortunately not a single predator was seen – not even on the night drive. Not a cheetah, wild dog, leopard, lion or hyaena at all.

The second group had come to Durban for a friend’s wedding and were now with me in the Hluhluwe/Umfolozi Park. Their night drive delivered, among others, two hyaena, some elephant, rhino and giraffe but not in any great number, so a bit of a disappointment – cats are always a bonus on a drive.

We had seen on the sightings board at Hilltop Camp that lion had been seen down south in the Seme area, so they prevailed upon me the next morning to go to that area to try and find the lions. We spent a good few hours in this area, and saw almost nothing – two rhino, a small herd of impala and three zebra! It was at this stage that I was ready to tear my hair out in frustration, when there was movement on the road ahead of me – four wild dogs! At last, some predators (and pretty rare ones at that). As usual with wild dogs, they were on the road, but on the move, so did not hang about for too long, but that one sighting made the early drive worthwhile. After breakfast we went out again and were fortunate to see a herd of between fifty and seventy elephants, crossing the road ahead of us. Again unfortunately, apart from this sighting, very few other animals were seen and we returned to Hilltop Camp for lunch. Sadly, there was another sighting of lion that had been seen at the Seme area that day, (but not by us), so for the afternoon they again prevailed upon me to try and find these animals. So what did I learn that afternoon? I learnt that you can never make the same mistake twice, because the second time you make it, it becomes a choice and not a mistake. This is what happened – we saw almost nothing. I had my camera with me, and did not use it once in this 3-hour drive - there was nothing to see! 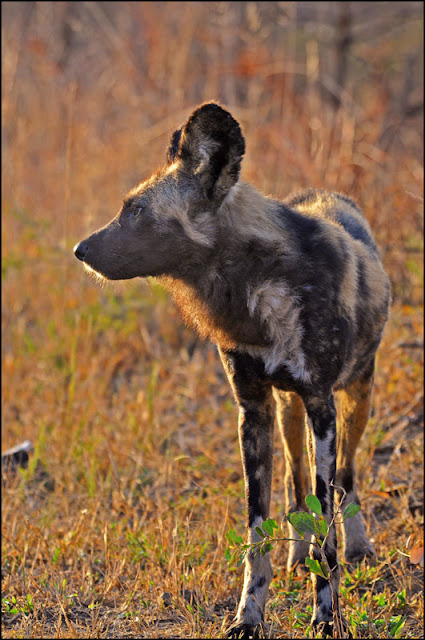 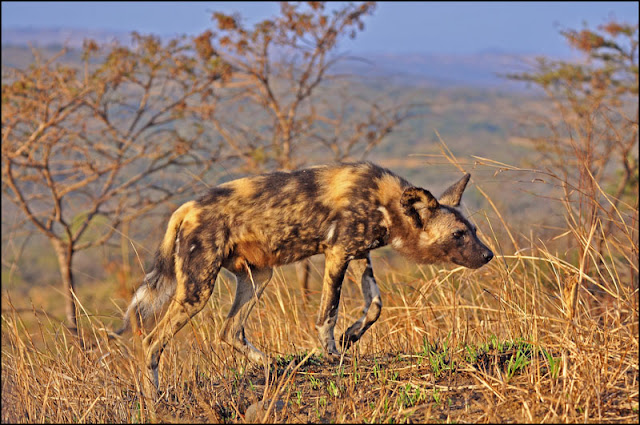 The next morning before breakfast we came upon a herd of between 100 and 130 elephant, slowly moving alongside a hill quite close to the road, so we spent quite some time with them. I did not take any photos of them – in fact, the only photo I took on this drive was of a bird. Most of the photographs that I took on both trips were taken inside Hilltop Camp – monkeys and birds! Here one can get fairly close to them as they are used to human presence inside the camp. This group so desperately wanted to see a big cat and we did not find any. 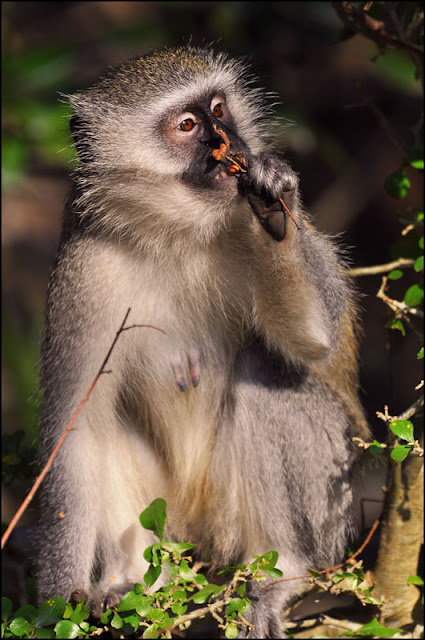 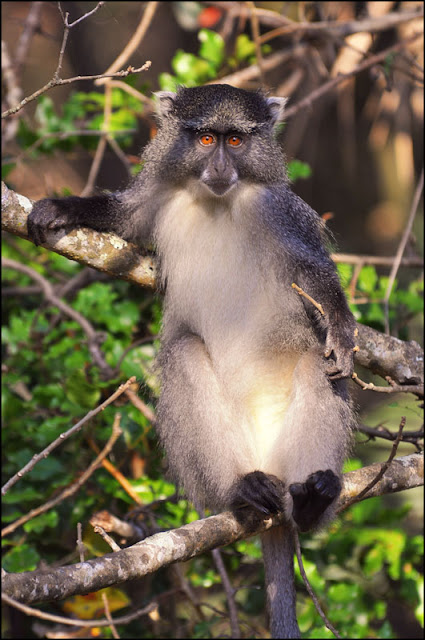 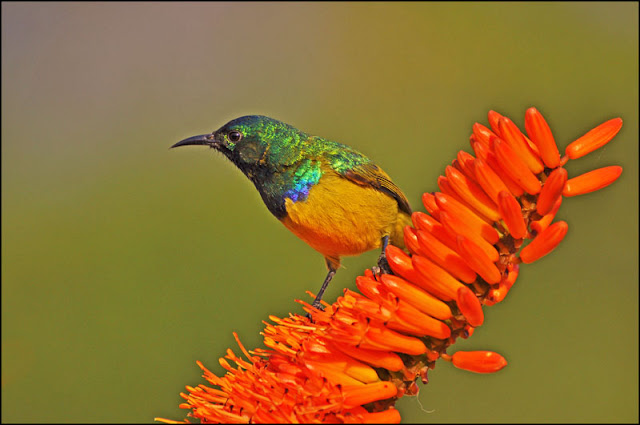 That afternoon we arrived in St. Lucia and did a game drive to the Eastern Shores. I believe that this is a very under-rated reserve. Most people visit here to get to Cape Vidal and don’t treat the wildlife as they would in somewhere like the Kruger Park or the Hluhluwe/Umfolozi Park. One sees vehicles laden with people and fishing rods, and they just want to get to the beach and cast a line, ignoring the large numbers of kudu, warthog, reedbuck, bushbuck, zebra, waterbuck and more that are found here. 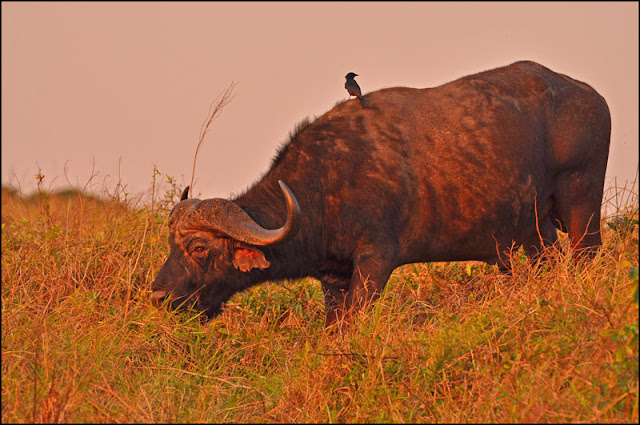 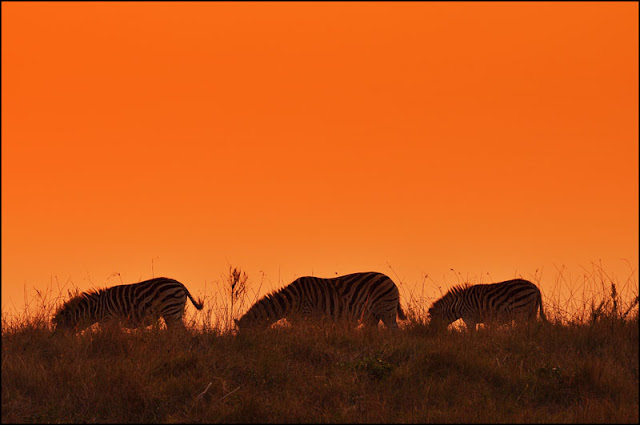 Along the road mid-afternoon one of my guests spotted something in the distance – a leopard! We kept this animal in sight and eventually were able to get close enough for some decent photos. What luck…we had now seen our predator and this, in my opinion, made the tour. We saw him stalking some warthog but did not see if he was successful in making a kill, but what an honour to observe this magnificent animal making super use of the cover and the wind direction to get close to his prey, paying very little attention to us. 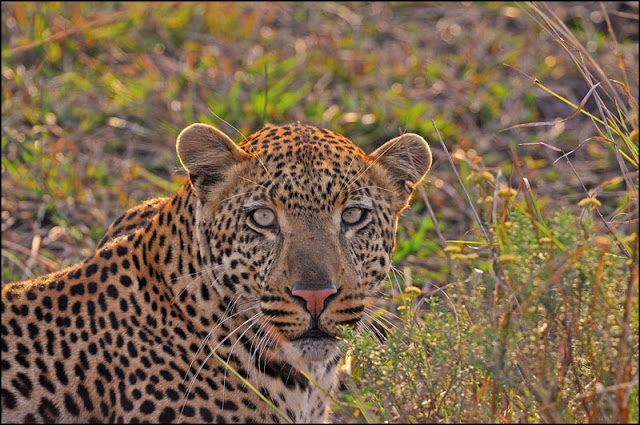 I have been around long enough to know that one does not always get what you want but I would have thought that, especially with my second group, we would have seen more than we did. All in all we spent about 16 – 18 hours on game drives in the Hluhluwe/Umfolozi Park on a full day, and the only highlights were two herds of elephant and four wild dogs, in my opinion a poor return for the number of hours on the road. A three hours drive on the Eastern shores yielded kudu, warthog, reedbuck, bushbuck, zebra, waterbuck, buffalo, bush-baby, genet and of course, the leopard!
Unfortunately with wildlife viewing there are never any guarantees. I have been on many, many game drives in the public reserves all over South Africa and all are different. However, one has to be aware that whatever is seen is pure chance, there are no guarantees that a specific animal will be seen at a specific location or reserve – you have to take your chances. Some game drives are very good, and then the following day, in exactly the same area, nothing is seen – this is nature and how it works. Having said this, when one goes to the private lodges in the private game reserves, the chances of finding specific animals, especially the big cats, is more than good, it is excellent. For example, the private reserves in the Eastern Cape normally always produce lion and cheetah, the Phinda, Amakhosi, Thanda and Nambiti in KwaZulu-Natal, cheetah and lion (and very rarely leopard), Madikwe in the North-West lion and wild dog and then the Timbavati and Sabi Sands, lion, leopard, sometimes cheetah and occasionally wild dog. So if you visit a park with the idea of seeing a specific animal, you have to choose carefully and the private lodges are your best option - if you are happy with what nature shows you, the public parks are good enough.
Posted by Keith Marallich at 5:04 AM