It was with anticipation that I left Durban to travel to the 22,000ha Kwandwe Game Reserve in the Eastern Cape in late May. This is an area that I am not too familiar with, and was keen to visit here, for a number of reasons. The main one was to see the different wildlife species, as opposed to the lowveld of Mpumalanga and the Hluhluwe uMfolozi Park species that I am pretty familiar with and to familiarize myself with those lodges that we may send clients to.

We arrived at Kwandwe, which is situated in the Grahamstown region, in time for lunch on a wet morning. In fact, we had traveled from East London to Kwandwe in pouring rain. We were transferred from the reception to Ecca Lodge, whilst there was still a fine rain prevalent, but this fortunately cleared up in time for our afternoon drive. 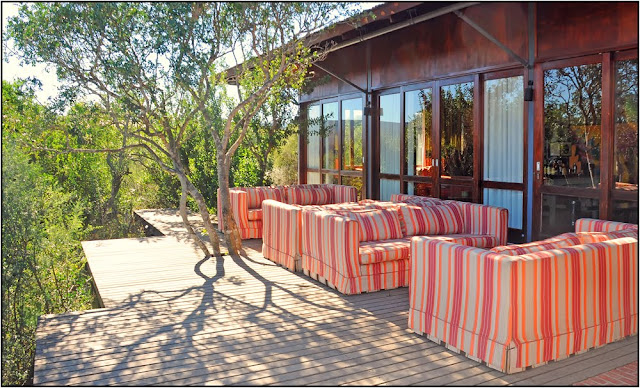 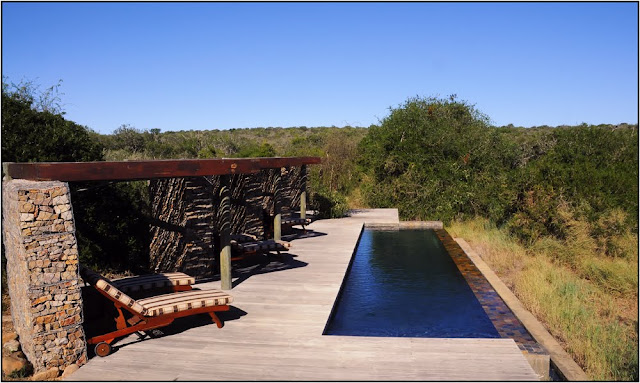 What can one say about Ecca Lodge? This was, as expected, subject to the same high standards as all other &Beyond Lodges that I had visited. Set in thick vegetation overlooking a dense valley, Ecca Lodge offers a breathtaking view onto an escarpment of steep shale cliffs. Expansive wooden viewing decks provide the ideal setting to soak up the bushveld atmosphere with a leisurely lunch or a sundowner drink. The Lodge’s pagoda-style corrugated iron roofs and walls of wood panelling blend seamlessly into the magnificent landscape.

Rooms are airy and open, with barely a barrier between the indoors and the African bush. Minimalist chic is the order of the day in modern, spacious bedrooms that share wraparound wooden decks with the suite’s private sitting rooms. Retro light fittings and polished concrete floors combine with shades of olive and burnt orange for a warm yet modern look. The ultra-modern bathroom, with its mosaic mirrors and glassed shower, refreshes and delights. An outdoor shower with a shiny tin tub tips a broad wink at safari tradition. 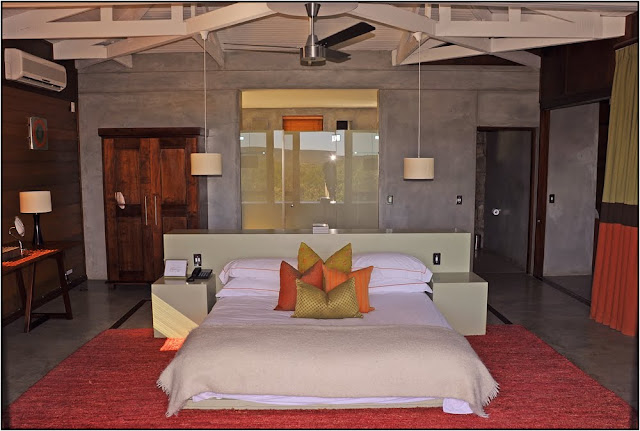 On the first afternoon game drive we watched two black (yes folks, black!) rhinos sparring over a female in some thick bush for about half an hour and then moved on. About twenty minutes later we chanced upon a female black rhino and her sub-adult calf, again in thick bush. We must have spooked her, as she took off and was running parallel to the road (and our vehicle) for about 30 -40 seconds, when she suddenly came out of the bush, straight at us! Now this was a scary moment – we are mostly all aware of the cantankerous nature of black rhinos, especially with a calf at her side. She reminded me of a steam locomotive, with all this 1500 kilograms of grey/black, puffing, angry rhino face to face with some very wide-eyed people on the back of a game drive vehicle, less than 10 metres away. She snorted and puffed, our ranger revved the motor, and a stand-off took place. We won – the rhino took her calf and disappeared, not to be seen again. Oh, and we saw three young male lions, but tame stuff compared to the rhino.

The next morning we had a very interesting interaction with cheetah. We had chanced upon a male cheetah that had obviously been feeding on a kill the whole night. This animal was ambling across the open plains with his stomach hanging almost to the ground, full of some unfortunate animal that was dinner. He arrived at a tree and started sniffing around and then scent-marked this area. I thought that he would then move on but he didn’t – he started calling. This went on for quite a long time until he moved off. Two minutes later he was back, with more calling and sniffing, which then gave us the idea that he was onto something. All of a sudden he took off, with us in hot pursuit in the vehicle over the grassland. I then spotted two other cheetahs not too far off, but our male gets there first! By the time we arrive, he has already cornered a female and mounted her, with her sub-adult cub looking on in surprise. You can almost hear the cub thinking, “Mom, what are you doing?” Anyway, our male has his way with her and she and her cub disappear whilst he then takes a breather and we leave the scene. 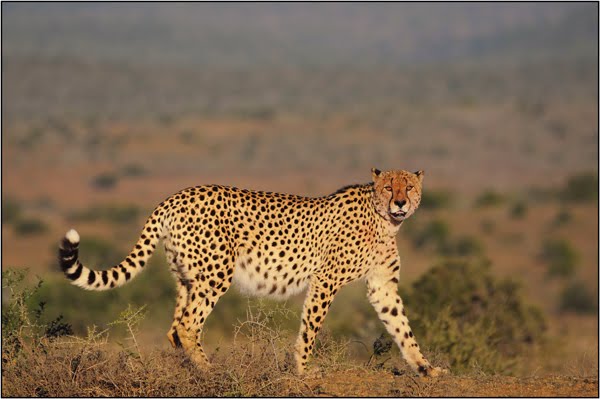 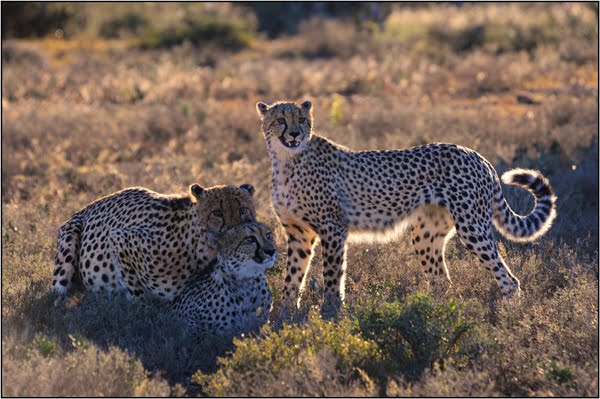 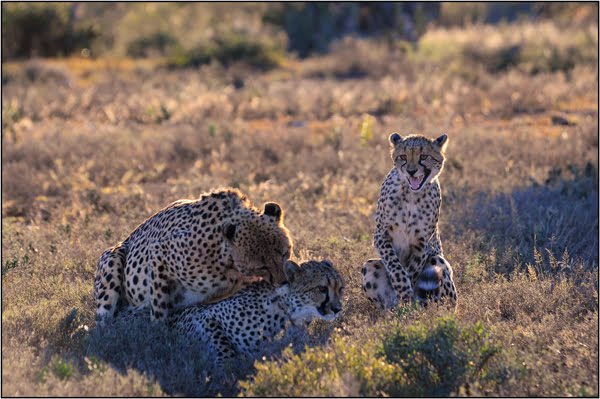 That afternoon I opted not to do a game drive. It had turned quite cold and the ranger and other guests had stated that they intended looking for elephants on that drive. Now don’t get me wrong – I think elephants are the most magnificent animals and I have the utmost respect for them, but sadly, I am a keen amateur photographer and up to this point have never taken a decent photo of an elephant. So this was my choice – elephants or the Super 14 final. The rugby won (as did the Bulls). Oh yes, when the ranger and the other guests returned, they had seen elephants but not much else on this drive – maybe the cold had something to do with this.

The following morning we were fortunate to see two bush pigs, but they were un-cooperative and didn’t hang around for a photo. What we did see was a lactating lioness, with another female and a magnificent male lion in close attendance. They had killed something in the riverbed but the thick bush made it impossible for us to see what it was. They had come out of the thick bush for a breather or possibly to fetch her cubs to join in the feast when we saw them. She had a slight wound on the foreleg, whether as a result of a kill or during the feeding frenzy, I’ll never know, but they did offer some nice photo opportunities. 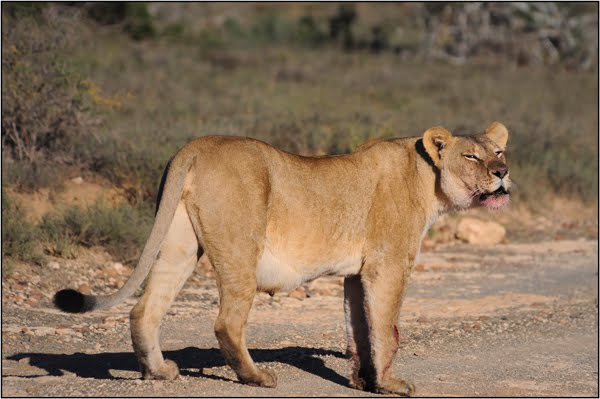 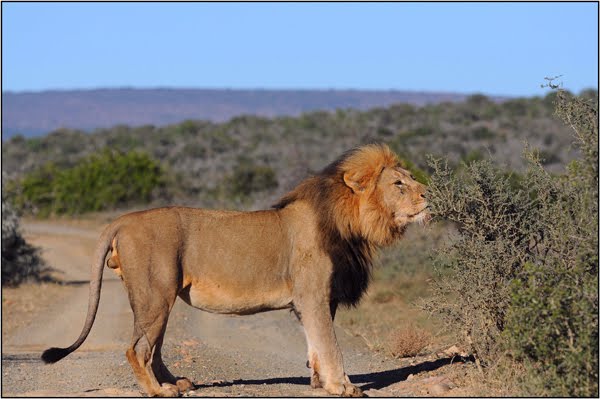 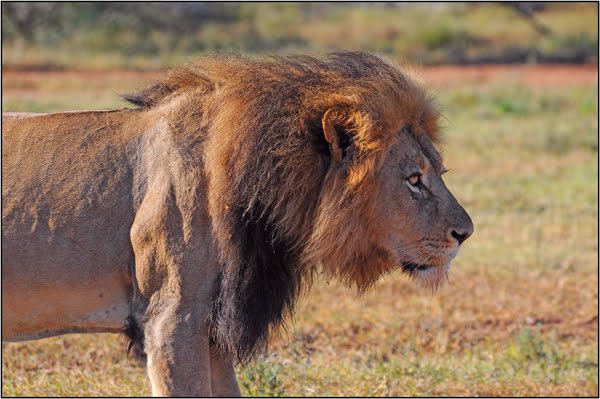 My views on Kwandwe? I would certainly visit here again given the opportunity, and can safely recommend this lodge to clients. I did however find the lack of general game a bit of a disappointment, but the sightings that we did have made up for this. We saw gemsbok, eland and hartebeest at a great distance, and had some good sightings of zebra and black wildebeest on the gallop – alas, they too were too quick for a decent photo.

Posted by Keith Marallich at 7:42 AM